Let Me Fly: A Celebration of American Choral Music (2016) 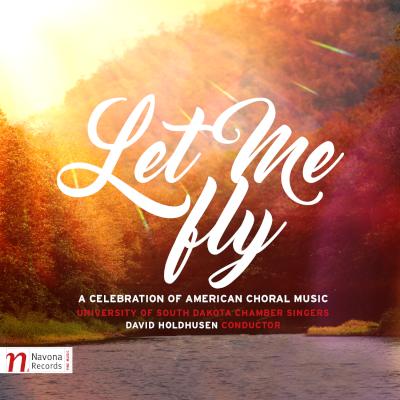 Impeccable musicianship but questionable repertoire mark Let Me Fly from David Holdhusen and the University of South Dakota Chamber Singers. While I admire Holdhusen's vision and musicality, I cannot get past this recording’s painfully outdated approach to cross-cultural performance. To put it more bluntly: there's a lot of minstrelsy on this release and I can't make my peace with it.

The pure classical repertoire on this album is a delight. I adore the choir's version of Psalm 23, a Tavener-esque setting by Jonny Priano. His other two compositions, Do Not Fear and There is a River are gems, and the ensemble sings beautifully on Stephen Chatman's In Flanders Fields. The group also does marvelous things with Jocelyn Hagen's Someplace, a genre-busting composition that combines choral sensibilities with vocal percussion and inspirational rock flair.

Likewise, the folk music hailing from European-American traditions comes with style, nuance and context. Windham is in fine shape-note fettle. Shenandoah is lovely. And Ward Swingle's Country Dances closes the album with an appropriate double helping of midwestern spunk. Mostly freed of their less savory cultural baggage, Turkey in the Straw and Polly Wolly Doodle come across as wholesome rather than cringe-worthy. Despite a bit of backsliding on the Liza Jane segment, this medley shows that you absolutely can approach old time repertoire with unfettered joy.

But the spirituals are too problematic for me to recommend this album to anyone. As a whole, they offer dialect choices that are wholly out of place in these otherwise classical settings, hearkening back to an era of caricature that is generally unwelcome in modern performance. Go, Tell It On the Mountain opens the album with fair warning for what is to come: a generally pristine and choral arrangement loses its cool every chorus with a deliberate descent into patois. "Go Teeeeelll It" indeed. This is a signal that we will not, after all, be getting a modern take on America's complicated history of choral music. At best we will get some good intentions that might have gotten a pass in the 1980s. At worst we get Dixie.

And in fact we do get Dixie. A beautiful, classically sung hymn of a performance. Notably not sung in deepest Mississipian and presumably not performed with confederate flags or other historically authentic accoutrements. This is a song so steeped in the worst parts of American history that it should come with a trigger warning, yet here it is straight-up, back-to-back with some aw-shucks-missus spirituals. Tone deaf barely describes it. In 2017, we expect careful consideration and discussion of what constitutes authentic performance, not just a good-faith stab at De Soun' of De South.

On some level, David Holdhusen knows this. He picked interesting Moses Hogan arrangements of Elijah Rock and My Soul's Been Anchored in the Lord and he let his soloists stretch their wings in ways that feel inspired rather than appropriated. And yet it was a mistake to have the choir sing its choruses as "Mah Soul's Been Anchored in De Lawd" — that's not how it's commonly sung or said anymore. Where the soloists showed style, the choir showed stodge.

In sum, Holdhusen has coaxed some terrific performances out of a very talented group of singers. I hope that as they perform this repertoire further, they reconsider how to perform it respectfully and in better recognition of our nation's sad history of slavery and exploitation.

With Let Me Fly, the University of South Dakota Chamber Singers follow in the footsteps of choral recordings past. With approximately forty auditioned singers, the newfangled individually tracked and mixed method for recording a cappella is just not feasible. So the choir recorded in an auditorium in single takes with room microphones. While the auditioned group has the technical skill to pull off single take tracks, the recording method imparts a sameness to the songs, the reverb washing away any individuality.

This reverb helps the choir with ringing chords and thundering refrains like those found in Shenandoah and There is a River. It hurts them when the music gets complicated or fast as in parts of O Day Full of Grace and Country Dances. The singers' studied articulation and diction can only do so much against the muffling effect of reverb. Soloists, in particular, fight to stand out from the rest of the choir.

This is not to say that this ensemble isn't impressive. This group performs with vigor and commitment, precision and power. The only hint of an off note is in Didn't My Lord Deliver Daniel? where the soprano high notes on the closing chord are a hair flat.

While Let Me Fly isn't the most exciting album, it is a good soundtrack for an afternoon of reading literary fiction, preferably something that has won a prestigious award.

Let Me Fly is performed by the South Dakota Chamber Singers, directed by Dr. David Holdhusen. It is over an hour in length, with eighteen tracks and a heavy dose of American folk music and spirituals. These include traditional choral arrangements such as James Erb's Shenandoah; Elijah Rock and My Soul's Been Anchored in the Lord by Moses Hogan; and Dixie by Norman Luboff. There are also several interesting modern works I have never heard before, most notably Jocelyn Hagen's Someplace (which includes beatboxing!), Z. Randall Stroope's I Am Not Yours, and Jonny Priano's Do Not Fear. This last piece was composed in 2016 specifically for the Chamber Singers.

As I listen to Let Me Fly, a number of things cross through my mind having to do with differences between choral a cappella music and contemporary pop-style a cappella. Choral music is less forgiving, as many things which can be done in contemporary a cappella where voices are recorded individually (such as balancing parts and pitch, and timing adjustments) are not possible in a large group choral recording. Blending parts together, and singing with unified vowel sounds and pure tones are therefore especially important qualities in choral works. Unfortunately the Chamber Singers are not completely successful in their quest to create fine choral music.

The Chamber Singers are at their best in the slower and often softer songs, where they focus on blending and locking chords to obtain a nice, unified sound. For example, my notes from Do Not Fear read thusly: "Interesting song. Nice dynamics. Nice blending. Nice intonation — locked chords. Really nice, soft last note." And I Am Not Yours, which is mainly quiet and introspective with lots of emotion, features the nicest fortissimo section of the album where the group gets very loud without distorting the tone.

However, in other pieces they often oversing the loud parts, and the balance is often off between the women and the men (too much women). And it seems whenever the sopranos get too loud, their tone also becomes quite harsh. Vibrato is often another pitfall for the sopranos which detracts from the overall blend. Although, oddly, some of the best moments on the album involve the very highest sopranos singing the very highest notes right on pitch without vibrato ... so it's perplexing why this is so much of an issue throughout.

The songs are mostly in tune, but often with one or two problematic spots. For example, sopranos go out of tune on many of the high notes in Go, Tell It On the Mountain (but the last note is nice). Sopranos are also out of tune in several places in Psalm 23. Altos are a little flat in a spot in Shenandoah. Tenors have a harsh tone in one section of Elijah Rock which affects their intonation. Both of the male solos as well as the soprano section go out of tune in spots in Let Me Fly (but again, there's a very nice ending note by the top sopranos). Several chords in Abide With Me aren't quite right. There's an overall downward pitch drift in Elijah Rock and Do Not Fear. There's a similar overall pitch drop in Didn't My Lord Deliver Daniel?, and some of the loud sections in that piece are harsh and out of tune.

There are also a myriad of directorial choices which must be made in choral conducting such as tempo, breaths, cutoffs, dynamics, etc. While overall Dr. Holdhusen does a nice job, there are several specific choices I disagree with. There are unpleasant swoops in Go, Tell It On the Mountain and Let Me Fly. The clipping of the word "rock" in Elijah Rock causes basses to lose the pitch in places. The start of Windham has a deliberate bagpipe sound which makes me cringe. Similarly, Country Dances (a Swingle Singers arrangement) is sung with a very harsh unpleasant tone, and a strange sort of nasal accent that to me makes it nearly unlistenable.

So, in the end what are we left with? There are certainly many nice moments. But continual issues of one sort or another throughout the album cause the phrase "consistently inconsistent" to come to mind, and I can't give this album my recommendation.

Let Me Fly: A Celebration of American Choral Music is available at ArkivMusic. The album also streams on Spotify.