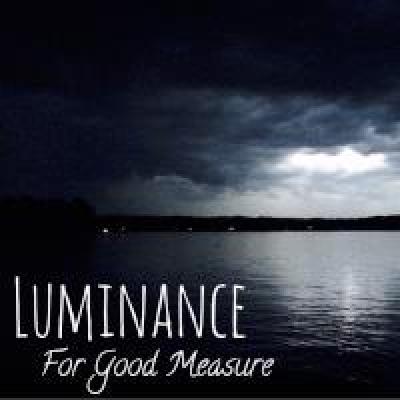 What a weird 19 minute sandwich I've been listening to. I'd never heard of the female collegiate group For Good Measure from Emmanuel College before receiving its EP Luminance for review. I'm overall satiated by the recording's fulfilling result even if some of the ingredients are beyond their sell by date and a part of the wrapping is a bit stale.

The best songs on this six-song EP are Do My Thing, La La La, and Glorious — three songs that sandwich the more mediocre tracks in the middle. These tracks have a lot of substance that satisfies the listener with a sexy groove, meaty swagger and angelic voices. Do My Thing is the perfect foundation for a great experience. It's energetic and fun with great performances all around. La La La makes me smile despite myself. There is something about the way soloist Cara Costello adds her own particular spice to the chorus. And Glorious is just that — so robust and full of flavor that it makes the entire experience all worth it. The other tracks do not have any of these qualities and it's a shame because this could have been a baller album.

Luminance comes across as a very natural product — almost organic — akin to recording an acoustic set. That's a choice to make and the ladies seem to adhere to this recipe religiously (albeit with a few production tweaks here and there to spice it up). Everyone is present in the mix as equally as they performed it in the studio. So that second soprano who was really excited about her "da da" moving background in Electric Love is at the same level as the soloist. Overall, the outcome is a sound that is a little thin (not sure if that is a production choice or the apparent youth of the singers), but man, there are some pretty awesome moments. In fact, just upon the first few listens, I thought this was a new high school group that I should keep on my radar. Part of that thought comes from the lack of warmth and maturity in the sound, but the mayonnaise-based difficulty of the arrangements of tracks three-five especially doesn't help.

I know it seems like I don't like Luminance, but I do. Is it the best dish I've ever been served? Not by a landslide. But I would recommend it as a selection on a menu when you aren't that hungry but want a quick bite of a cappella.

Luminance by For Good Measure packs an EP of groovy a cappella tracks.

It can be a challenge for an all-female group to establish a great wall of sound because there's not much room to move around in the treble arena. The usual issue is overlapping sounds in the melody tessitura: the arrangers don't have much choice but to push altos to the limits of their lower range, or sopranos would cause the songs to sound screechy as a result. These overlapping sound issues are prevalent in Do My Thing and Shark In The Water. I believe these overlapping background vocals that are in the same note range as the melody should have been processed to sound "there, but not quite there" during the soloist's time to shine in the limelight.

However, there are tracks that have evenly spread out voicing in the arrangements (Lay Me Down, Glorious, La La La, and Electric Love). As a result, the background vocals do not sound distracting from the melody line. For Good Measure is pretty good in selecting its soloists. Cara Costello in La La La has a really solid solo performance and turns in my favorite track of the EP. Shanna Figlewski's solo in Shark In The Water is also notably convincing. Lay Me Down's choral approach that exposes the group's vulnerabilies could have been more effective if the singers did not "try" to be vocally perfect. Sometimes it's okay to let your emotions carry you to deliver a good performance. And lastly, Glorious is one great way to end an EP. Carley Durant's soothing solo performance is such a pleasurable aural experience.

Luminance has some arrangement hits and misses but is redeemed by the good front liners who sing the solos. If wasn't being too technically-focused to hear which background vocal lines distract, I would have scored this EP higher. I hope that these women can kick it up a notch on their next recorded a cappella performance.

Luminance is the second album by For Good Measure at Emmanuel College. The album is on the shorter side — only six tracks — but is quality work and an easy listen.

I'm scoring this album a high "3" because while it features above-average soloists and production, it is limited by average arrangements that allow listeners to lose interest at points. The group also struggles to maintain energy in the background parts.

First, let me rave about La La La. This is a great track that For Good Measure should look to as it moves on to future projects. Cara Costello approaches the solo with purpose, energy, and intensity, and her execution is excellent. The backgrounds sound engaged, and there is just enough going on in the arrangement to hold listeners' interest without sounding too busy. Shams Ahmed, who arranged La La La, especially deserves recognition for a job well done here. I will be adding this to my permanent library.

On the other hand, other arrangements limit the group's opportunity to knock it out of the park. I'll point to Electric Love and Lay Me Down as examples, though all songs feature these arrangement limitations to varying degrees. The "da-do-dah"s in Electric Love add a pulse to the song, but I find them repetitive and boring after the first minute. The song also features block chords in parts that drain energy from the song. A similar dynamic is at play in Lay Me Down. The combination of a slow tempo and block chords makes me feel like we are moving through molasses. I enjoy Katherine Parisi's rich tone in the beginning of the song, and she has a lot of potential as a soloist, but the arrangement is limiting.

There are other bright spots, too. Do My Thing features two spunky soloists that make it a great intro song. In fact, all the solos show off the group's talented singers. Additionally, I think the production is well done and makes the listening experience smooth (though in general I would like better use of dynamics). I also like the track order and songs featured.

Luminance is a solid album from a group on the rise. I look forward to following For Good Measure in the years to come.