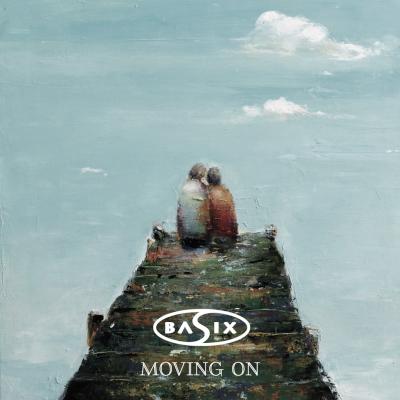 Melancholy is the dominant mood of Moving On, billed as the final recording from the much-heralded Basix. The first two cuts, Moving On and the beautifully wistful Autumn, set the tone and it never really leaves us. Even the peppier numbers sound sinister — Earthquaker has a tinge of the stalker about it, for all that it seems to be a love song, and Safeword compares climate change to a sexy bondage scene gone sour.

Later we get to be nostalgic that Pluto Is Not a Planet Anymore, along with various science fads now banished to history. Taken individually, each song is well-constructed and beautifully presented. Taken as a whole, I'd say you have to be a big fan or really in the mood. Otherwise you might find yourself wanting to awkwardly edge out of the room.

Sonically, Basix has an amazing consistency. The backgrounds show off a marvelous range from bass to soprano with first-class soft-rock percussion — I particularly enjoy the textures in On Any Other Day — overlaying the songs that need it. But all the leads are the same nasally tenor. After listening to this album multiple times, I wanted to hear another timbre on the melody.

All this means I'm not quite sure what to make of Moving On. It is lovely. But I'm not sure how many times I'll seek it out again.

The notion of reviewing the 10th and final Basix album is a sufficiently difficult and emotional enough concept to process without the group giving us Moving On, an album that itself is such a cavalcade of emotions and moods, many of which focus on the ideas of loss, what might have been, and what should be.

In a way, it's almost humorous to me inasmuch as in my last review of a Basix album — 2009's double-CD Diversity — I lamented the downbeat nature of the group's lyric writing. And yet here, in the context of this being Basix's swan song, the tinge of sadness, occasionally anger, and always introspection that permeates all twelve songs (all by Niels Norgaard) is richly affecting and deeply effective.

What Basix has never lacked since I first encountered the group in 2001 (already six years into its existence) is talent in singing and blend, and creativity and intelligence in music-making. In particular, the lyric writing is as good or perhaps better than anything you're likely to hear in English in the a cappella world (made all the more impressive seeing as how the members are native Danish speakers), and could give even some of the better lyric writers on the pop music scene a run for their money. There are echoes of Simon & Garfunkel, Bob Dylan, Tracy Chapman, Sting, and others to be heard here, and it's a true pleasure to enjoy music where the words are truly painting pictures for the listener alongside the music (and in this case, also alongside evocative paintings by artist Annette Nordenhoft which are included in the liner notes and are meant to reflect the mood/theme of each song).

The musical settings of these terrifically expressive songs is where your individual mileage may vary. There is a wide variety of styles presented here: from straight-ahead pop songs with catchy hooks like Earthquaker; to the more eclectic, slightly edgier, more overtly political Pluto Is Not a Planet Anymore; to less traditional song structures that feel a bit like poems written first and set to music second such as Autumn; to Chaconne, which uses a baroque musical device (in non-baroque mode) to seemingly meditate for a moment on an emotion, as does Immortal Moments in devastating fashion.

If there are moments where the musical composition is perhaps not quite the equal of the masterful lyric writing, they come for me typically in the uptempo selections, where the group enjoys establishing a particular groove. Said groove is invariably built on some nifty rhythms and sounds (the whistling effect in Earthquaker is a particular favorite of mine; ditto for the Caribbean/All Night Long-infused opening of On Any Other Day), but rarely budging from, building or expanding on that initial groove to take the listener on a true musical journey to something that much more exciting and inspiring by the song's end. There are certainly some exceptions — the unexpectedly crunchy jazz harmonies on the back end of Little I Dare for one — but generally, the uptempo tunes start smooth and cool and pretty much stay there, when I keep hoping they will get even a little cooler. On a related topic, the other nagging note — and admittedly this may just be my hang-up — is an issue I have highlighted before with this group: namely, the shunning of a proper bridge section in nearly all of the songs. To be sure, some of the more contemplative songs here would not naturally and smoothly accommodate a bridge, but a song like Safeword highlights what a great moment a fresh and interesting bridge can provide and I wish we had a few more of such moments elsewhere on the album. (Though to be fair, on that particular song, which is fresh and interesting for the first few minutes, I don't actually love the much more conventional and straight-ahead writing that is waiting for me on the other end of said bridge.)

Still, even if this or that wasn't always my cup of tea, what a pleasure it is to even have the opportunity to discuss an a cappella release on these terms. Yes, the singing is of course flawless, the blend is seamless, and the mixing and mastering by Bill Hare is unsurprising perfection. But Basix has long been one of the gifted few that occupy rarefied air amongst those a cappella ensemble groups that can consistently truly make you groove and feel. That can engage your mind, your heart, your ears, and your tapping feet all at once. I'm terribly sad to see them go, but what a wonderful send-off they've given themselves — and us — with this magnificent album.

On Any Other Day, I'd have been really excited to receive a new album by the Danish superstars in Basix. I say this because receiving this album means the end of a journey for me. No, I'm not leaving RARB (heaven forbid), but Moving On represents the last time I'll hear new music from these guys and my friends. It's fitting that this is the last review I've written in 2017, as this is the last album from one of my all-time favorite groups (that is, unless fans can convince Basix to continue to record in the future even if the group isn't going to perform/tour anymore). It took me a long time to write this, because the last chord of the last song signified the end, and I'm not great with endings. No tears, but I did get pretty choked up. The group has been going strong for 21 years, the same age that some of you singing in collegiate or up-and-coming pro groups are now. I've been listening for the past sixteen years, and according to my last.fm account I have listened to Basix 1,616 times (with is probably about half of the actual times since the program doesn't scrobble all of the devices that I listen to music on). That's a lot of Basix, and a lot of blessings and beautiful music.

We get it all on Moving On: the touching tenderness of John Kjøller, the soaring emotionality of Anders Ørsager, the rhythmic funkiness of Peter Bach, the sexy swagger of Morten Sønderby, the surprisingly supple solo voice against the rumbling bass of Toke Wulf, and the exacting and creative (writing) and percussion of Niels Nørgaard. All of it. All of it swirled up in a glorious amount of originality that only the Basix guys (well, Nørgaard mainly) can muster. He's written all of the songs on this farewell album. His writing has matured so much since listening to tracks from the group's debut album The Grass in 2001. On Embodiment, in Dining Out there seemed to be unintentional hilarity at times considering English is not his native language. His genius began making itself known on 2009's Diversity on the group's first all-English recording (a double album at that) with the title track and possibly one of my all-time favorite songs Cry out for muses. And now, on Moving On, each word seems to have been picked perfectly for the right emotion, the right image, the right thought. Pair that with the divine singing and the intricate arranging and you get an album for the ages.

Your current mood will determine which tracks speak to you the most at any given point in time.

Earthquaker, Pluto, and On Any Other Day uplift in a way that makes your body move from the seismic joy. A more pensive mood pulls you toward Immortal Moments, Chaconne, and Saint Francis. When you just need to scream it all away, Safeword couldn't be a better backdrop; the angst of tension, release, and creepiness melds into one terrific experience. The sensuality of the music of Little I Dare belies the sense of accomplishment it takes to just be a survivor and make it through the day.

But if I had to pick a favorite, it would be Autumn. The album speaks of maturity as a unifying theme and it is never more evident than with this song. It speaks of a love that is settled but never stale, comfortable and worn yet at times electrifying and challenging. Ørsager takes his formidable talents to new heights; using his rich lower register to transition from the idyllic naivete of love at its youth, while his upper register fends off the coldness of love that's come to an end.

The opening song is the one that continues to kill me, though. Moving On sets up the listener in the gentlest way possible about the doubts of a life that we used to know coming to an end while also expressing this inevitability — the true finality of it all. After this song played, I had to stop listening to the album for a long time before continuing.

As the closing track Cry In Turns states so eloquently that we can cry in turns and laugh in turns, I just want to say "Thank You" to Basix for allowing me to do both over the years. Ord kan ikke beskrive min kærlighed til dig.