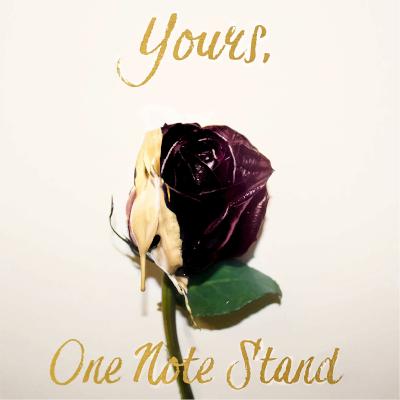 Yours teeters on the edge of dexterity and disarray. Each song is a time bomb; it catches your ear with the foreboding tick-tock-tick and then bowls you over with an explosion of volume, harmony, and percussion. There is a genuine power and craftsmanship behind this album that makes it unique and impactful. At the same time, there is an underlying sense of the situation careening out of control that makes you want to take cover. So at what point does compounding energy and arranging devices go from musical to melodramatic?

For a first impression, Yours is impressive. This is the first professionally-recorded album from One Note Stand, a mixed a cappella group from the University of Texas at Austin. There are no inside jokes, no cliché covers or simplistic arrangements. On the contrary, the whole album has a very bold, no-nonsense tone and is steeped in the sophisticated stylings of jazz and R&B. There is a sense of creative cohesion that starts with the tantalizing introduction to Bass Song / Crazy In Love, carries through the segue from My Everything into Latch, and culminates in the uplifting Our Own House interlaced with lyrics from throughout the preceding performance. One Note Stand does not waste time with fillers. Every song has a purpose, both in achieving a narrative of its own and in contributing to the work as a whole. All of this is orchestrated masterfully by group director and lone arranger of eight of the nine tracks (and co-arranger of one), Pearce Illmer.

With so much coming together right for One Note Stand, it just doesn't all come right together. I have written before about what I call Pavlovian Percussion, or Puppy Perc. A persistent issue with Yours is that the vocal percussion is wildly over-enthusiastic, adding subdivisions and sound effects in place of tactful emphasis when the rest of the arrangement builds from moody to climactic. This is particularly distracting in Deeper, You're Nobody 'Til Somebody Loves You, and Latch.

Also out of proportion are the background vocals stuck on "Loud and Proud." This is partly the mixer Dave Longo boosting the volume and midrange frequencies, but there is a predominant shouting quality that is just not necessary for stationary pads and throughout the quieter moments. These pads not only muddle the more interesting background lyrics, as in Leave Your Lover and Our Own House, but depending on your sound system they can easily drown out the soloist. The percussion, background, and soloist should not vie for our attention; they should work together to capture it.

The energetic jazziness in Yours leads to some expressive musical moments. Bass Song / Crazy In Love, I Put a Spell on You, and Choices pull off some awesome feel changes while maintaining a connection to the melody. It is when the performers, or at least the components of the arrangement, don't agree on what to express that the energy just explodes in a melodramatic "Loud and Proud." That's my opinion on the matter, but you should check out One Note Stand for yourself and decide on Yours!

I hate the word "perfect". In reviewing these albums, we have a level of criteria that constitutes an album as some scale from poor to excellent. Therefore, when describing these albums, there is a score that could be considered a "perfect" score. Even then, when looking at that score, just because it meets all the criteria that defines perfection doesn't mean that the album is perfect. However, after listening to hundreds of a cappella albums, I can definitively say that as I write this review, this is one of the best albums I have ever heard.

There is so much that is absolutely incredible about this album. Pearce Illmer is a machine of an arranger, penning the arrangements for the entire album, with the exception of sharing arranging credit with Andre Galuban on I Put a Spell on You. Each song is different and merit-worthy in its own regards. There are lingering stylistic choices, such as the pre-emptive musical impacts that occurs early, keeping the listener on the edge of his seat the entire time. Our Own House has a great moment of this, where the climax of the song (and the album) hits just perfectly on beat three of a measure. It's a very interesting musical decision to me, as it feels off for a few seconds. However, the impact being so sudden does so much to the moment that has been created, forcing the listener to pay attention to what is happening in the music. The sudden shift does so much to demand attention, and what follows begs to ask why anyone was distracted.

Sudden shifts seem to be a very commonly recurring theme for this album. For the most part, I applaud all these decisions, as they are very well presented and keep the album interesting. There is only one sudden shift I found to be really jarring. That shift is in Latch, where the entire momentum from the opening measures is immediately sapped away by the sudden shift when the soloist enters, changing from a complex multi-rhythmic background to sustained block chords. It takes a full verse for the momentum to return to what it was in the beginning. It's impressive that One Note Stand is able to fully return to where it began, as a sudden loss of momentum is often a death knell for many recordings. However, the group makes it feel like they have been doing this for years, and proves that just because it can happen to recordings doesn't mean that it will or should.

But arranging is only a part of this album — a group still needs the vocalists to drive everything forward. That's the soloists in a nutshell here. Every single soloist is incredible on this album and acts as a focal point for each track. Whether it's Aubrey Folck demonstrating her amazingly impressive control of her range in Our Own House and Deeper, or Ryan Lord absolutely breaking your heart in Leave Your Lover, the foreground presentations are flawless. One Note Stand has a surplus of individual talent, and it is clearly utilized across the board in a very meaningful way.

If there is one flaw in this album, it's that it tends to get a tad formulaic. With one arranger, all songs tend to roughly follow the same pattern. The big moments impact the same way. The flow of the ballads is very similar between songs. As I am very much infatuated by the way these songs are presented, I have no issues with the formula. However, it poses the next great challenge for One Note Stand. When the current group is gone, what's next is always an interesting statement. For an album that stands on a plateau so high, what this group does next could very well approach that impossibility of what we call a "perfect" album. However, before we speculate too far about the future, definitely give Yours a listen. I guarantee you won't be disappointed.

Yours is the first studio album released by One Note Stand, but you would have no idea from listening to it. This album has some spectacular moments on it.

The album has a cohesive sound and theme. Strong pulsing bass lines, prominent vocal percussion, and a knack for show-stopper moments permeates the track list to make this a high-energy listen. This is not a breakup album, to say the least.

Pearce Illmer arranged all of the songs (except for I Put a Spell on You, which he still co-arranged), in addition to recording and editing Yours. This contributes to the cohesiveness of the album, but at times veers into being repetitive. You're Nobody 'Til Somebody Loves You is a good example, especially the buildup and power-chord climax in the second half of the song. The song is well-executed, but this arranging tactic is recycled elsewhere (Choices comes to mind) and is noticeable. Also, sometimes the soloists are overshadowed by the wall of sound coming from the backgrounds, though this may partially be a production issue.

Apart from that, however, the arrangements do a good job building on the original songs in interesting ways. I particularly like what Illmer and the production team did with Latch — the electronic and percussion elements, and the duet portions. I also notice the references to Latch in the songs that bookend it on the album. Some may think it's gimmicky or cheesy, but I think it is subtle and tasteful. This attention to detail is something few groups do and it helps make the album air-tight. I am impressed.

Yours has multiple excellent soloists. Aubrey Folck takes complete control of not one, but two tracks on the album (Deeper and Our Own House). She brings energy, emotion, attitude, and precision to the tracks. Lindsay Sloan does a similarly great job on I Put a Spell on You, including some especially intense belting post-key change — wow. Finally, Ryan Lord and his smooth bass tone are a good pick for Leave Your Lover.

Overall this album borders between a "4" and "5". Yours is well-executed and has outstanding moments — I really enjoy listening to this release.

Yours is available for purchase on Loudr and iTunes, and streaming on Apple Music and Spotify.