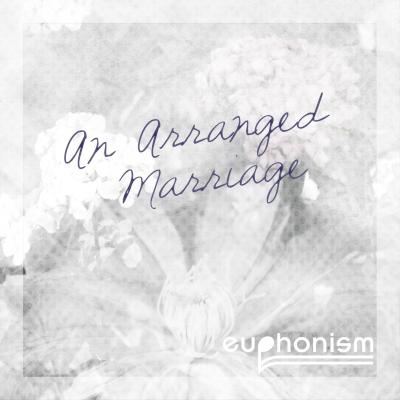 The first thing that struck me about Euphonism's An Arranged Marriage was, "Wow! What an awesome idea!" Get twelve first-rate a cappella arrangers — many of them members of world-class groups — and let them have their way with a cover well-suited to their skills and style.

Then I looked at the track list and the second thing I thought was, "Whoa! With so much groovy funkalicious source material — especially on the front half of the album — I'm really gonna dig this."

But like actual arranged marriages, there are some success stories to be found, but there are also swings and misses. On quite a few selections, it's a bit of both — the culprit most often being a complex, tricky arrangement that may be sung accurately but isn't necessarily performed or recorded effectively.

I know a few of them personally, but I get the sense that all of the members of Euphonism have a reasonable amount of training and/or experience singing classically and/or theatrically. That serves them extremely well on the repertoire that lives in a similar neighborhood: most notably, on the last four songs on the album. The funk, R&B, and soul of much of the earlier material makes way for a more formal approach, with imitative covers yielding to more stylized, borderline choral interpretations of less traditional material than what might typically be found on a contemporary a cappella album. There are still some moments that fall a bit short — strained sopranos here, less nuanced dynamics (than I'd prefer) there, some missing finesse in softer, lighter moments in a few places — but this is lovely and most enjoyable work. It's a long stretch of mellowness, so your attention might waver a bit, but it's solid stuff.

On the aforementioned groovier song choices, the group certainly doesn't want for jazzy, crunchy chord goodness, courtesy of folks like arranging master Tom Anderson, Kurt Sampson of Cadence, and Troy Dolendo of The Edge Effect. But whether the issue is that the arrangements are so challenging that the group needed to spend all of its energy on just singing the right notes; or whether it's the group perhaps not having the greatest facility with Manhattan Transfer-like vocalese and/or the rapid-fire syllables used to imitate horns; the net result is a bit underwhelming. The chords are all there, and they're delightful, but they're lacking in feel and groove (the bass lines being the notable exception). Lines that need to be delivered with crisp and punchy attacks and tight cutoffs instead are sung far too legato. And in general, the energy level is lacking in quite a few of the "signature licks" from these songs which should be the very embodiment of energy, driving the song forward and getting the foot tapping and the head bouncing.

Indeed, energy — or a lack thereof — is a broader problem that permeates this album and does the group a disservice. Here too, I know members of this group to be very enthusiastic singers and charismatic performers, but for whatever reason, nearly every song on this album gravitates towards the middle; none of the true explosiveness one might hope for from the uptempo funk, and very little of the delicate and quiter moments that some of the slower, more emotional moments deserve. I felt, at times, like I could see the group in the studio, hanging on for dear life in trying to execute these formidable arrangements, and in so doing, perhaps a bit of their usual verve and panache was lost in the singing itself.

Of course, a project like this is incredibly ambitious and even just learning and being able to record much of this material is a laudable accomplishment in its own right. But while it's commendable to keep challenging yourself as a musican, the group may want to either seek out material and arrangers that play to its existing strengths, or the singers will need to up their game a bit in the vocal jazz and funk department to truly give terrific arrangements like these the equally terrific and energized performances they deserve.

An Arranged Marriage is an experimental album of sorts. There are no particularly outlandish sounds or amelodic compositions. On the contrary, most of the tracks are covers of radio-friendly artists representing various corners of the modern jazz/pop arena. What makes this album experimental is that each song is arranged by a different a cappella aficionado, none of which sing with Euphonism. It's the musical equivalent of telling twelve of your friends to bring over their favorite art pieces and then figuring out how to decorate your living room. Cool and different? Definitely. Something that will get featured on the cover of some interior design catalog? In this case, probably not.

The result of this experiment is nothing earth-shattering. Though the twelve arrangers presumably did not coordinate their efforts, their twelve contributions fit together into a cohesive compilation. Stylistically each song has some flavor of jazzy groove (bossa nova, funk, ballad, etc), a layering of staccato scat-sounding riffs devoid of heavy pads, and an impressive array of blue notes and colorful harmonies. If not for the press release, you might never guess how much went on behind the scenes of An Arranged Marriage.

What's missing from this marriage, which may or may not stem from the creative process, is energy. Too Hot to Stop, Home At Last, You Are a Winner and All For You require a certain snap that just isn't there. In Your Eyes, Secret and Desafinado are pleasant but just sort of drag on. Many groups make up for low energy or lackluster performances by piling on voices and open-vowel harmonies. With only seven singers and relatively sparse arrangements, Euphonism often sounds over-exposed and under-enthused. The most emotive songs are actually the slow songs at the end of the album: Bein' Green, Evacuating London, and Where the Sidewalk Ends. These arrangements are less linear than the rest, and their wistful meandering is much better suited to the subdued tone put out by the group.

The last full-length album Euphonism released was Stuck in a Memory in 2012. While the mixing was less polished, the overall performance is palpably more engaging than what we get on An Arranged Marriage. Contracting some of the top arrangers in the business is great for inspiration and spicing up your sound, but sometimes the style and voicing provided by an outsider doesn't feel as natural as when it comes from the singers themselves. Collaboration is great for learning and building community, just make sure your friends know what kind of artwork resonates with you before you invite them over to decorate.

There is something to be said for correct pitches and rhythmic accuracy; these fundamentals are certainly present on Euphonism's An Arranged Marriage. The album feels like its name suggests: the building blocks are in place because they were predetermined, the troops are assembled, and the task is executed according to plan. The sheet music is sung correctly, but the album lacks a spark: that energy, ebb and flow, and individuality in both solo and background voices. Even with some interesting chords, the marriage feels a bit forced and the album follows suit.

The album begins with a unique take on In Your Eyes. Clearly the focus is on the solo line with some ethereal background voices setting a tapestry on which the chords may travel smoothly. The monochromatic nature of this singular texture serves the group well on this track. But this texture remains throughout the album, causing it to drag considerably. There are numerous passages in other songs though, such as Too Hot to Stop, You Are a Winner, and (It's Not Easy) Bein' Green, in which some interesting chords are prevalent and help to break any sense of monotony.

There are a few factors that make the album feel one-dimensional more often than not. The group has a tendency toward a consistently moderate dynamic level and the absence of crescendos or decrescendos on held notes does not help create a journey within any singular track or the album as a whole. The percussion throughout the album feels very simple, metronomic, and, as a result of studio-level perfection, canned. The subdued energy of the group borders on complacency at times, especially in songs like All For You that rely on more vocal intensity. The solos are not particularly challenging range-wise and many soloists do not seem to take ownership or display any flair in their interpretations.

A significant part of the listening experience on this album depends on the device: it is strongly recommended that you listen through headphones rather than through a speaker, as the latter has the separation between voice, background, and percussion feel considerably more prevalent. The smooth sounds and nice choice of chords make An Arranged Marriage a good choice for ambient background music.