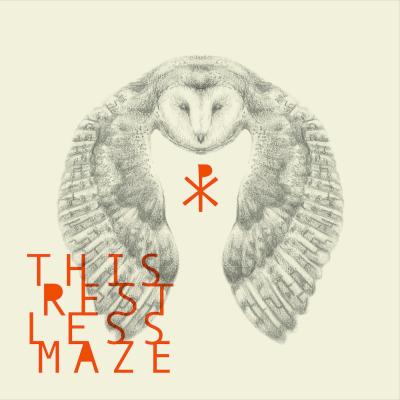 Let's start by saying that I'm a fan of Chi Rho from Wake Forest University. The group has put out solid, if not exceptional, music during the past two and a half decades. I first saw Chi Rho back in the early aughts when producing an ICCA competition at Wake (bonus tangent, Lee Norris from Boy Meets World performed in a non-competing group). I was taken by the group's dedication to both strong singing and spreading the gospel. It worked for the singers, especially considering the school they were attending.

So it's a bit of a surprise that there isn't that same attention to musicality on This Restless Maze, the latest release from Chi Rho. Though some of it comes from the production choices made in the mixing — I'm finding issues with balance throughout the album, parts that are definitely ancillary and given too much emphasis. But that would only be a slight distraction if the entire album didn't suffer from the bright buzzy syndrome, which is where I believe the lower musical ability comes into play.

Each song seems auto-dyned to death; the artificiality is rampant enough to make it seem like the group didn't have the ability to tune and blend or produce any effective dynamics without the studio magic. Even the two more choral tracks, Wayfaring Stranger and Come Thou Fount, have this forced electric crackle throughout — listen to the basses in each to get a clear picture. Now where it works, man, that production choice makes the tracks pop. I love both Sabotage / Home and White Owl, the latter being breathtakingly beautiful top-down.

White Owl is some of the best arranging work that I've heard from Tom Anderson in years. It's remarkable how it seems to unfold gently as the song progresses, never rushing or plodding, and yet the current of — I don't know, goodness? — washes over the listener from the first inhalation of breath to the last twenty seconds of "Oo". And it's a long song; it could have easily meandered and lost its way over the 6:06, but it doesn't. The sign of a great arrangement is one that conveys the story being told without causing much undue attention to itself. That's what we get to experience here with minimal use of fluff, gimmicks, or cloyingness.

But all of the arranging wizardry is for naught if no one can perform the song. That's not a problem here. The backs and harmonies work consistently throughout. They overextend on a few "look at me" moments, but in general put their collective "foot" through this song. And finally, you need a strong leader to carry you home. My initial description of Caleb Cabiness's voice was "creamy". And I'm sticking to it. He milks every note with a masterful display of emotion while making all of the technique seem effortless. Kudos.

I am also impressed with Clay Hamilton on Sabotage / Home (also an Anderson arrangement) and Locke Heberton on Get Home. Both do wonderful jobs on these particular tracks.

One more arranging nod goes to the apparent collaboration between Anderson, Hamilton, and Brad Stephenson on the closing track The Fall. Off the Beat were the harbingers of overlaying lyrics from other songs into the primary track. The Fall does this so naturally and thematically by going back to the beginning and incorporating Street Lights as a primary focus after the bridge, and then adding Show Me What I'm Looking For and Home for extra effect as they head to the outro. It is brilliant, as none of the snippets of the songs seem out of place as a part of the current song. Had I not immediately recognized Street Lights when it started, I wouldn't have listened diligently enough to find out what else was packed in there. What a joy. And an exhalation at the end of a track is one of my favorite things — that summed up the whole album in such an excellent manner.

Finally, let's hear it for liner notes going old skool. I used to sit and read album jackets (especially Prince and Sting), looking at the lyrics and other tidbits that were written there. It was a treat to be able to do the same with Chi Rho's album. What a great touch! Plus it helped me figure out the other songs included in that final track.

So, my overall score is a "3" for This Restless Maze. The buzziness of the production, some of the intonation problems in many of the soloists, and the lack of balance on some tracks just mires the entire album in the average realm. Even though the high points of the album are remarkable, they aren't enough to elevate this release beyond the die-hard fan.

Chi Rho of Wake Forest University is more than just a Christian a cappella group. While the group may have an affinity for spiritual music, its true talent lies in delivering music in an uplifting and purposeful way.

This Restless Maze shows how Chi Rho can take Christian rock, folk, and alternative songs (among other genres) and deliver an album that feels inspiring from beginning to end. The album's opener is the only major issue of the project, as Street Lights is an extremely somber track, suffering from both repetitive vocal lines and poor mixing, with the bass too prominent. Any of the tracks that follow would have been a good substitute in its place.

Chi Rho's strengths lie with hard-hitting, percussive-heavy tracks, which is felt immediately with Who You Are and Sabotage / Home. From the first bass and percussion hit of Who You Are, Chi Rho proves to the listener that they are in good hands as the track has a nice soulful groove, complemented by smooth-flowing harmonies that add a light touch to the strong demeanor of the song. Sabotage / Home is full of short and quick vocal rhythms, which maintain an energetic rock-feel that could easily appeal to those who like their a cappella music intense, engaging, and upbeat. The group's inclusion of Wade in the Water in the bridge of the song also helps keep Chi Rho's spiritual identity top-of-mind.

This Restless Maze does an excellent job of including various music styles into a single track. The arranging of White Owl is masterful as it carefully integrates elements such as folk and electronic music to create a very surreal, artistic experience. In terms of vocal technique, this track best displays the group's abilities, from the steady and commanding force of the lower voices to the group's natural talent of transitioning through sections of a song.

Wayfaring Stranger is utterly innovative. The song starts with a somewhat ancient sound and feel, then transitions to a more dynamic and modern atmosphere through magnificent layering, powerful vocals, and an incredibly big third verse. It's an experience like no other on the album.

Come Thou Fount shows how Chi Rho can take an audience on a musical journey with spine-tingling dynamics with every vocal entrance, an angelic-sounding lead singer, and a group blend that could compete with any university chorus.

Chi Rho caps off a superb album with The Fall. This track takes the listener on one last rollercoaster of emotions with its varying styles, the grandest of these being its reflective tone, which shows the group reintroduce melodies from tracks heard earlier in the album during the song's bridge.

From the way Chi Rho incorporates transitions between tracks to its ability to deliver songs in inspiring ways, it is not hard to see why This Restless Maze works on a myriad of levels. Chi Rho has a true passion for music and it comes across in each song on this album.

Chi Rho from Wake Forest University packs another collection of Christian contemporary music into one album. This time, it's more of an experience and it feels like each song is connected with the other tracks.

One thing I love about Chi Rho is the group's musicality. The singers seem to lock dissonant chords that only music nerds could understand. The group's takes on Wayfaring Stranger and Come Thou Fount are beyond amazing. I could listen to these two tracks all day. I've heard these songs performed a cappella before, but Chi Rho's version of each song is now the reigning first place finisher. The artistic freedom to revise a well-known work and make it sound fresh is one of the best things an a cappella arranger can experience. And that freedom is utilized properly here. Big kudos to Brad Stephenson who arranged both songs.

White Owl and Show Me What I'm Looking For are my next favorites on the list. The chill effect of White Owl is like a Saturday morning breakfast where everything feels relaxed and worry-free. And Tom Anderson used some next-level chords that are eargasmic. Lastly, The Fall becoming a grand mashup of songs from the entire album is a smart way to end this release with a bang.

I cannot pinpoint any major issue with This Restless Maze. (Although there's not a single notable soloist who made me drop my jaw in awe.) And yet, it's just that the overall feel of this album is so mellow and slumbery — Who You Are could have been placed in the happy section but the singing is not quite there to give it kick.

Still, Chi Rho put so much thought into putting together This Restless Maze; it's not just a mere collection of Billboard's Hot Christian Songs. To those who haven't listened to this album, grab a copy. Chi Rho's fans will not be disappointed.