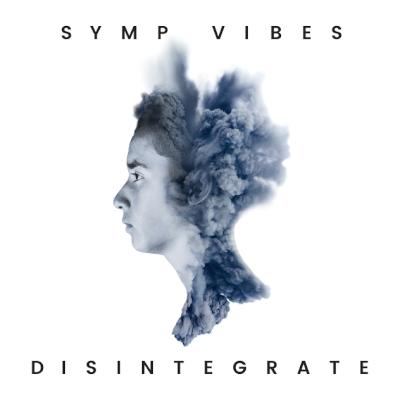 I'm still getting it wrapped in my head that the Brendon Urie who is the lead singer of the songs I Write Sins Not Tragedies and Death of a Bachelor is the same Brendon Urie who was on Broadway in Kinky Boots. His jump is amazing. That is the same way that I feel about this latest EP from Georgia Tech's Sympathetic Vibrations. The jumps they make between songs is truly the most innovative aspect of the recording. It doesn't disintegrate at all; its permanence is almost guaranteed.

This is a very natural-sounding recording but with a crisp and sparkling overlay throughout. You hear each of the moving parts within the arrangement (which are across the board fantastic) but it's always towards a unified goal of making an electric recording. The basses are a bit buzzy for my taste, but other than that, I'm digging what the SympVibes are delivering.

Now this natural sound is both a boon and bastard for the recording. While a listener can appreciate the live replicability aspect of the tracks it does expose the continued tuning, intonation, and blending challenges that have shackled the group for a number of years. Ofttimes, voices don't match extremely well and the blend can be a little off, but the knack for making those chords work anyway is a trademark of a live performance by the group. And they've finally been able to capture that rough-hewn musicality to great effect here. But then they'll have this amazing moment of pristine sound that leaves one stupefied. I'm still drooling over the jazzier movements in the middle section of Suffer from around the 1:20-1:35 mark. Jesus!

The arrangements are the real stars of this recording. Each song is tweaked within an inch of its life. There is never a wasted moment in any of the tracks in the background. That is unheard of. Okay, maybe on one or two songs on an album, but when your five tracks are all jamming like this you know what the hell you are doing. I'm impressed. Richard Huckaby and Caleb Wikle are either true geniuses or they really know the vocal abilities of the guys they sing with. Either way (and, more likely, great arrangers have both qualities). Listen on repeat just to pull out the intricacies and super moments on each track.

For me, the only perplexing aspect of the EP is the fact that it closes with My Love. Check out the review of the single release from October 2016. It was released as a single, and that's even more apparent with it being the last track here. The abrupt ending of the song doesn't allow for the album to breathe. So while the electricity and energy doesn't disintegrate, it does dissipate far too quickly.

So grab yourself a smattering of what the SympVibes are throwing out there and prepare to be electrified. You've been forewarned.

The SympVibes are historically a mixed bag. On stage, these gentlemen are usually aces with swagger and slick moves, real presence, and a real audience connection. But after hitting the recording studio to drop an album, I've frequently felt disappointment, as the group's choppy RARB scores over time demonstrate. With the release of Disintegrate in the Richard Huckaby era of Music Directors, we lose most of the "dis" and experience a stronger blending of both style and execution resting on foundation of largely dazzling arrangements.

Irresistible is a difficult chart to execute well, but the SympVibes handle it easily. With an amped-up soloist, rhythmically playful verses, rich choruses, and an arrangement that daringly features a buzzy bass swimming around on big open vowels, it's the opener you want. Moving down this EP, Panic! At The Disco's contemporary Big Band sound on Death of a Bachelor is very hard to capture a cappella. The background syllables and patterns in the SympVibe's presentation can distract more than enhance, and the frequent punchy staccatos/horns don't really complement (or successfully contrast) this creamy lead. Filters that mute and compress the backs could have sonically shaped this one into a more pleasant listen, staring off Disintegrate with that choppy outcome I feared.

The group really swings back up with the next two tracks. The intro for Until the End of Time is a bit lackadaisical, but then Arrion Jackson drops in with his fantastic solo work. Jackson owns this one with his timeless R&B voice that's all flair with a splash of grit. A production note: all of the leads on Disintegrate could be popped out more from the mix; the soloists on Until the End of Time and Suffer even more so as to not lose the delicate but awesome falsetto work. Continuing along, Suffer is addictively interesting from top to bottom. By ultra manipulating rhythms and intensity, the SympVibes and arranger/soloist Richard Huckaby are actually manipulating our expectations of sound. The impressive result is as good as the product from any professional group.

On the group's final number, My Love's focus is not quite as laser-sharp as the rest; blend and intonation are a little looser, and the energy is a bit too laid-back. It does successfully wind us back down from Suffer, but it's a tall order to follow the brilliance of Suffer with just about anything.

I'm quite pleased with the strides made on Disintegrate; it's cohesive, unique, and content-packed for an EP.

One crucial aspect that has been a constant in the a cappella community is the absence of identity in studio albums or EPs. This dilemma has plagued many scholastic groups, while being nearly non-existent in mainstream music. Luckily for us and anyone who listens to Disintegrate by Georgia Tech's Sympathetic Vibrations, you'll quickly realize that the all-male group does not suffer from this same malady.

The album's artwork is both fitting of the EP's title, and is masterfully done with its striking and appealing design. Each song is brilliantly arranged and most have an abundance of soul. And this is where the group's identity is primarily felt...tracks where soul is infused into their lifeblood.

Until the End of Time establishes a 90s R&B throwback vibe from the opening verse where the tone is self-reflective, layered under utter smoothness. One key feature that helps to sell the track is the arpeggios of the higher vocals that are crisp, accurate, and clean. Add in the track's constant forward progression and lead vocals that would even make Justin Timberlake applaud, and they've struck gold.

Suffer, which is also big on soulfulness, displays a more straightforward energy and different type of swagger. The song is heavy on layering, which can come off as busy at times, but the group is so skillful at controlling the pace of their sound that it never goes off the rails. In addition to a fantastic soloist, the rap section contributes a great deal to the song's modern appeal.

Justin Timberlake's My Love is reworked by the group and opens with a heavier, darker, and more sensual nature. The song is big on theatrics with multiple stop and start moments where the SympVibes make you feel the emotion that oozes through their chords. The outstanding rapping, riffs, and changing rhythms of the bridge also helps to propel the track.

The group's old-school, vintage sounding Death of a Bachelor is also praiseworthy. Although the vocal percussion comes off a bit strong, it cannot take away from the color and tone of the soloist, an impressive breakdown segment full of vocal trumpets and a plethora of vocal percussion tricks, and a backing group who has such a rich and full sound.

Irresistible is an up-tempo beast full of fast singing and youthful vitality. The EP's opener will resonate the most with younger audiences, but it can be easily enjoyed by listeners who like their a cappella with plenty of vocal effects and great movements by the backing voices, or anyone who likes their songs to have a pulse.

While only half the tracks are a "5", the project flows together and ignites the senses so well that it's hard to give it anything other than top marks. Leads are exceptional, energy is authentic, and personality is felt through both arrangements and the way they are delivered.

Disintegration is a great representation of a group who knows who they are and how to share that with the world through music.

Disintegrate is available for purchase online and streams on Spotify.