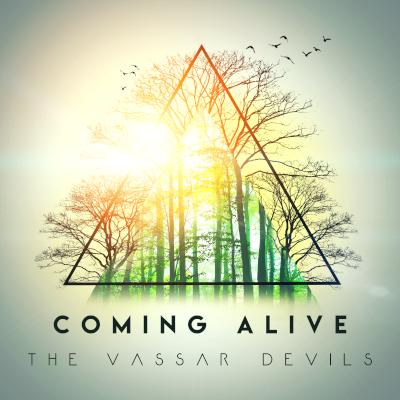 Just scanning the liner notes without even listening to any of Coming Alive from the Vassar Devils, I had a wee bit of concern.

As I've written before, a cappella albums — and collegiate contemporary albums, in particular — arranged entirely (or nearly so) by a single member of the group tend to burn fast and bright early on but flame out quickly. For whatever reason, the inventiveness tends to wane, the attention to detail is sacrificed to the need to churn out a larger volume of work, and the bag of tricks is half full, if that. But there are exceptions.

Matt Goldstein is such an exception.

Save for four tracks where he shares credit with the prodigiously talented Hannah Tobias, everything one hears on this remarkable release is the product of Goldstein's arranging gifts and the results are often quite astonishing.

I'm certainly not the only one, but it's been a refrain of mine in these pages for many years now that slavishly transciptive arrangements of cover songs, as fun as they may be for students to sing, are profoundly less interesting to listen to than those that are truly interpretive rather than imitative and, often at their best, reimagined entirely.

What a joy it is, then, to find an album where interpretation is given such prominence and reimagination is the rule rather than the exception. And no, we're not just talking about uptempo songs rendered slowly, or gender-swapping solos, or (yet another) dubstep breakdown where one didn't exist previously. Goldstein is more artful than that, offering interesting/unusual repertoire selections, and the sort of unexpected, ear-catching artistic choices one might expect to hear from top pro arrangers but rarely from students.

There are almost too many instances to name but here are just a few to taste: the re-harmonized moments in Iscariot and How Deep Is Your Love (as well as the treatment of "imagined you dead" in the former); the syllable and arranging choices at the top of Break Me Out; the entire first three minutes of Runnin' (Lose It All) (before the whole thing takes a much more conventional and cover-y turn); the build and development of Blood I Bled as it progresses (which was one of the highlights of the group's award-winning set at BOSS 2016, along with Privacy and Alive from this album). And there's plenty more where that came from.

Now, in the interest of being thorough, it's fair to say that Goldstein's bag of tricks is filled to the brim, but it's also reasonable to say that he has his favorites. When listening to an entire album of his work, you start to notice them a bit more. A few too many songs have "intro" moments, not present in the original, usually louder (to then contrast with the verse that is about to begin), and riffing on the title of the song or a particular lyric. In various permutations, we also get a few too many "beat drop" moments — vocals building to a huge crescendo and then cutting out with or without a lead voice soaring over them before re-entering in thunderous fashion. And perhaps notably, the Devils have never met a fortissississimo they didn't embrace full-throatedly, and there are arguably too many of them showcased here. On any one track, the volume that we inevitably reach by minute three and beyond may well be impactful, but when listening to the album as a whole, it becomes a little relentless. The group is mindful of dynamics generally, but save for Gone, the softer moments don't last terribly long; we could use a few more of them. And speaking of soft, the group's production team at Sled Dog could be a bit more mindful of this as well. The tech credits are polished and slick per usual, but there are multiple instances where the ever crescendo-ing backs are competing too noticeably with the soloist and, in the case of Gone and Runnin', the backs win — which simply shouldn't happen.

Alas, the nature of collegiate a cappella is such that the stay of most members in most groups is brief. To wit, Goldstein graduated earlier this year. And while he will hopefully continue to provide the group with arrangements as an alumnus (in addition to other groups for which he arranges), it remains to be seen if the Devils can continue to meet, or even exceed, the very high standard set here. In the meantime, though, Coming Alive is one of the better scholastic a cappella albums I've heard in quite some time — and especially from a group that didn't already have a longstanding legacy of superior work — so I highly recommend you check this out.

The Odyssey. Hamlet. Death of a Salesman. Harry Potter. Coming Alive is one of those works that you could spend a whole semester picking apart for themes and techniques. Just when you are ready to sum it up in a neat package, you stumble across a whole new line of inquiry that compels you to go back and listen again more carefully. Here is the crash course.

History: The Vassar Devils are a mixed collegiate group that has been performing since 1987, yet never before released a professional studio album. You might suppose they have spent thirty years honing their craft, waiting for the right moment to spring their genius on the world. Given that all eleven songs on this album (plus the 2016 single I Will Wait) were composed in the last eight years, you might also suppose that they only recently decided to kick it up a notch. Either way, the Devils give us a lot to chew on for a group that is just Coming Alive in the studio.

Structure: There are three general arrangement schemes on this album, all squarely on the pop spectrum. How Deep Is Your Love, Break Me Out, Cough Cough, and Time Machine are straightforward. They settle into a pace almost right off the bat then stay there for the duration. These are the least dynamic, least emotive of the tracks. The second scheme is rolling. Privacy, Nothing, and Gone oscillate between high and low energy, building irresistibly from movement to movement all the while. The last scheme takes us on a journey. Iscariot, Blood I Bled, Runnin' (Lose It All), and Alive begin in one place and then traverse all manner of moods and rhythmic combinations to finish somewhere entirely more fulfilling. The songs on Coming Alive have enough variety to keep you engaged, but enough in common to feel like a cohesive collection.

Style: The Devils hint at their signature sound with a few smart arranging techniques employed throughout the album. Ominous intros, a few moments or even minutes of floating before percussion locks in the tempo (How Deep Is Your Love). Lyrical interplay between the backgrounds and soloist, both in rounds and call-and-response that bring the group together from more atmospheric harmonies (Alive). EXPLOSIVE final choruses coming out of the bridge (Privacy). Though there are no full-on mashups or medleys, The Devils tease a few lines from songs to create subliminal continuity on Coming Alive (Iscariot, Time Machine). The Devils are so in tune with their style that they can slip in an original (Nothing) that feels every bit as familiar and compelling as songs you hear on the radio every day.

Conclusion: Coming Alive has the vocal prowess, arranging ingenuity, production, and heart to become a classic. Cough Cough is not my favorite, but Privacy, Gone, Runnin' (Lose It All), and almost any other track can easily get stuck in your head long after finals week.

This album is a cut above. I had high expectations following the single I Will Wait, and this album meets a good deal of them. I'm going to talk about the whole product briefly, but then focus on the standout track for most of this review.

First of all, there's solid arranging across the board. Matt Goldstein has a pretty good handle on his group's sound and cues into the ear-feel of the Devils. The harmonies are fascinating and tight; I love the trio on the front end of Privacy the most. The syllables are varied and fit the songs appropriately. I Will Wait composer Hannah Tobias also has a dab hand in the shaping of Cough Cough (excellent soundscaping in this one), Iscariot, Alive, and the group's original song, Nothing. Secondly, the strong soloists keep you involved — hats off in particular to Tamsin Chen on Time Machine; her honest tone sets the mood beautifully.

I'm less excited by the production, sadly. There isn't anything pointedly wrong, but there are a few moments that lack the liveliness that some of these arrangements demand, and you can tell it's something that got flattened out in the recording process as opposed to musical choices. The song choice is mostly strong; the composition is fairly eclectic, which does give us a lot of interesting material, but does seem to lack cohesion as an album. These gripes are pretty minor, and I'm nitpicking because I can get this detailed on this product. Any individual track is worth your attention.

But the true diamond of this product is, without a doubt, the opener: Iscariot. This is the wheelhouse of the Vassar Devils — the progressing emotional growth through steady layering, the calls and echoes that build into a powerful arrival, the beautiful reimagining of an already great song (originally Walk the Moon, a personal favorite band of mine). Everything about Iscariot makes me want to hear it again and again and again. The growth is incredible, and the choices Goldstein makes as the co-arranger and the soloist are perfect. The sensation you get on the rest taken by the group on his nearly sotto voce "dead" is truly incomparable. The voicings are the most impressive part — the lines come out so precisely, it is enrapturing.

If you can can only get one track from Coming Alive, take Iscariot. If you can take them all, you won't regret it.