Sound Off A Cappella 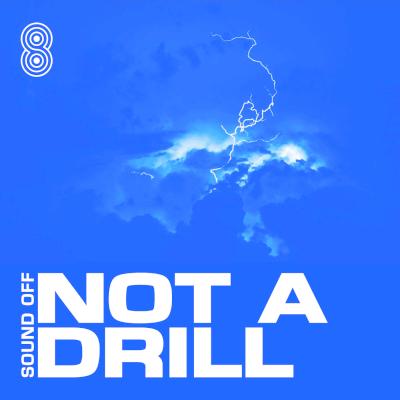 Put a group together that includes a number of well-known and experienced singers and arrangers (one of whom is also an in-demand, award-winning producer/engineer), and a resulting album from such a group — like Sound Off's Not A Drill — is bound to come with high expectations.

And in many ways, the group does not disappoint. This album is as clean and polished-sounding as one is likely to find — capably recorded, seamlessly edited, tastefully mixed and mastered. Some post-production bells and whistles turn up here and there but it's nothing unusual or jarring and indeed, the most prominent instances — some DJ sampling/remix moments during In the Name of Love and at the top of Wild Things — are well-suited to their original source material.

As it so happens, I also know a number of the folks whose work is featured on this album both in front of the mic and behind the console and as such, their moments to shine — the solo work of Liz Mongrello and Eileen O'Hara, the arranging of Kevin Guest, and the producing of James Cannon — brought me a good amount of satisfaction and joy for them.

What's that slight tinge of disappointment, then, that nags at me nevertheless?

It's hard to encapsulate in a single word but "interpretation" might be the best choice (or as close as I'm likely to get). For starters, the group has chosen repertoire that spans a good range of styles, timbres, and general feels. Given Cannon's particular expertise and proven mastery of hip-hop/rap/electronica-infused material rendered a cappella, it's no great surprise that the opening In the Name of Love turns out to be the strongest work and winner of the 2017 CARA for Best Contemporary A Cappella League (CAL) Song. Wild Things benefits similarly. But that tendency to smooth out the edges and give everything a certain digital veneer serves songs like I Want It That Way and Drink You Away less favorably. Each in its own way cries out for a more ragged sound — more acoustic and "chill" for the former and rawer/grittier/bluesier for the latter. Ditto for a cover of the Boyce Avenue cover of Katy Perry's Rise which sounds way too full and lush and expansive by the end, almost sounding more like Perry's version than seemingly intended.

That fullness/lushness becomes an issue as well due to certain arranging tendencies by Kevin Guest and Angus Finlay (who account for all of the all-around solid, if not extraordinary, arrangements showcased here, with some editing by Cannon and Guest as well). Especially in the case of I Want It That Way and Rise — already mellower and/or groovier acoustic interpretations of the originals — the arrangements desperately need room to breathe and space to establish the alternate approach to rhythm and feel for these songs from Postmodern Jukebox and Boyce Avenue. Instead, what we get here as well as on Circular Road and a bit on Fire too is a steady "hum", which at times borders on a drone. Not that the singing is in any way poor or unpleasant, but so constant is the sound, with every beat seemingly occupied with something or another, that the ear doesn't really get a chance to relax and settle in. Choruses don't explode — or have no room to do so — if the verses are already going full blast and an exciting moment is thus lost.

And this leads to a third element: dynamics. Or in this case, the absence thereof. Now one might be able to make a credible argument that much of this repertoire doesn't demand a ton of dynamic variation but especially with songs that are extremely repetitive, a little bit of attention (or more attention) to dynamics can go a very long way.

The opening sentiments still hold true, though. The whole in this case is ultimately greater than the sum of its parts and, if you're a fan of the songs offered here, you'll likely enjoy Sound Off's renderings. I just sense that this group is capable of even more complexity, nuance, and depth, so I'm hopeful this lineup is around for a while and we get another chance to sample their ample talents.

Sound Off A Cappella is an approximately fourteen-member Contemporary A Cappella League (CAL) mixed group based in Boston. I say approximately because fourteen singers are listed in the album liner notes, but only twelve members are listed on the group's website. With eight different soloists on a seven-track album, they are clearly experienced singers, and parts of Not A Drill rank among the best a cappella in my collection. They have a primarily pop style but range into the R&B genre for a couple of tracks.

My three favorite tracks are In the Name of Love, Rise, and Circular Road. In the Name of Love is probably the slickest track, and I mean that in a good way. I wasn't familiar with the original by Martin Garrix & Bebe Rexha, but this version is certainly cool. The female soloist, Liz Mongrello, is superb, and well-suited to the range of the piece — both the range of the pitches as well as the range of the dynamics (from intimate to full-blown belt). Some dub step production on her voice in several spots is done exceedingly well. All of the singers sound great, and the mix is great. Rise, originally done by Katy Perry, is also fantastic. I love Patrick Dennen's solo, especially how effortlessly he switches into and out of falsetto. But my favorite of the three is probably Circular Road; again, not a song I was familiar with (the original is by Heathers). There are two female soloists who move into and out of unison throughout the piece. The soloists' voices are kept very natural, which is great because they are again superb. At first I actually wasn't quite sure if I liked that arranging and directorial choice, since the natural voices don't always blend perfectly when in unison, but it really grew on me as I listened. After I finished the album, this is the song I most wanted to listen to again.

While those three songs are roaringly successful, some others are a bit inconsistent. I Want It That Way is a jazzy take on the Backstreet Boys' song. The female lead has a sultry, velvety voice. However, this version is missing the energy of the original and unfortunately ends up feeling too nightclub-y to me. A couple of questionable production decisions also spoil the mix, such as a spot where the soloist's volume is inexplicably turned down, and an odd locker-room-like reverb for the final ten seconds of the song. Wild Things sounds a bit overproduced to me and is harsh in places. It's almost as if those two songs were engineered by a completely different person compared to the three songs I mentioned earlier, but the liner notes list the recording, editing, and mixing engineer as James Cannon, obviously very well-known in a cappella circles (and he's also a singer in the group), so the inconsistency is perplexing.

Those relatively minor quibbles aside, Not A Drill is a very solid album and one well worth your time.

The end is where this review of Not A Drill shall start. "Oh we on fire, we on fire." The final words of the final song are anthemic, a rallying cry reminiscent of Wavin' Flag by K'naan or Roar by Katy Perry. Except why are we getting fired up for the end of the EP? Rather than bring closure to Not A Drill, Fire instead reminds us of all the other moments that made us scratch our heads.

Another ending, another oddity. In the Name of Love wraps up the last chorus nicely at the 2:55 mark. Led by the powerful solo of Liz Mongrello and electro mixing by James Cannon, this track is one of the more entertaining on the album. The background parts are cluttered to the point where you can't understand a single syllable, but with proper mixing they do convey the right trajectory. The real trouble is that after 2:55, In the Name of Love launches into almost thirty seconds of a spliced together remix. Cool? Yes. Appropriate? Eh. This sort of breakdown would have made a killer alternative to the bridge. Instead it's a bizarre segue into the next track.

What comes next is almost more puzzling: I Want It That Way. As in the Backstreet Boys, but the arrangement is based on a soul cover by Postmodern Jukebox so it isn't even as fun as a throwback. It's just an awkwardly slow memento of what was hot in the '90s, and it's followed by an equally tepid Drink You Away.

I digress. Sound Off A Cappella is a co-ed group comprised of tried-and-true singers, almost all of whom graduated from college a cappella groups or are professionally involved in music. These musicians clearly have the voices and technical savvy to make a bold artistic statement, but due to some unfortunate miscalculations they don't. It was a conundrum for Unannounced in 2015, and two years later we are still getting more of the same.

The same the same the same. That is why Not A Drill is a "3" instead of a "4" for me. In the Name of Love, Wild Things, Circular Road, and Fire start with the promise of being phenomenal. The soloists are adept, the backgrounds are together, the choruses are rousing and the production adds a modern sheen to the whole package. By the second chorus, however, each song gets tired. The melodies are inherently repetitive and the arrangements do nothing to add variation or complexity. All the gusto is unveiled in the first chorus, so after three minutes you forget why you were so enthused with these chord progressions.

Sound Off is great at beginnings. If every track on Not A Drill were condensed to one minute, it would be an intensely riveting recording. To keep us engaged to the end of full-length songs, Sound Off needs to focus less on what brought them to an arrangement and more on where they want it to go.