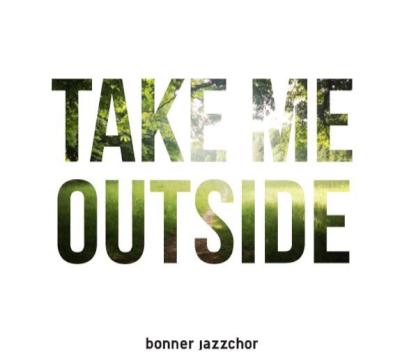 Bonner Jazchor is a German rhythmic choir. Despite the name "jazzchor", Americans would be unlikely to perceive Bonner as a jazz ensemble. Folk-influenced Euro-pop forms the core of its style; jazzy chords give it spice. And as it turns out, categorization is a key element to the experience of TAKE ME OUTSIDE.

On the choral side, Bonner's blend is lovely. The group's intonation is both extremely natural and accurate, all the more impressive given the dissonances in its arrangements. Undoubtedly, the ensemble's greatest strength lies in group cohesion. Bonner's voices are simply united in sound and in emotion, consistently powerful and expressive.

Now to the pop side of things. Short-attention-span listeners (Americans. Let's just say it.) should attune themselves to smooth, blended though a bright tone, mellow grooves, slow builds, and slightly longer formats. This isn't the type of group to throw in a dozen mash-up quotes to keep the audience's focus. Payoffs come in rich choruses, clever chord choices, attention to phrasing, and steady intensity. But in fairness, even patient listeners may miss the more drastic and dramatic changes of texture that could have been more liberally utilized.

The production choices lean towards naturalism, but there are some pronounced studio effects, Green Garden being the most notable. This makes the treatment of vocal percussion slightly confusing, as it isn't strictly natural, but it isn't always as powerful as it could have been either. As an example, the backup "dah"s on Tainted Love actually overpower the snare, generally the driving sound of pop music. This is more a comment on production choices than performances. Perhaps the intentional straddling of choral and pop worlds forms the basis for the production issues. But as a listener well-versed in the rhythmic choir style, I still find myself wishing for more crispness, more levels of depth, more separation of elements, more overall edge. I want more pop from what is essentially a pop choir.

Bonner Jazchor is consistently artistic, but with choral singing, there is always a danger that emotional intimacy can be diminished as we lose vocal specificity. Human, the guest track with SLIXS, brings that issue into sharp focus by contrast. We're treated to the fullness and beautiful phrasing of the choir we've come to love, but also a raw, gritty solo and driving body percussion. Human does indeed focus the storytelling through the lens of a single voice — not to the exclusion of the group, but in concert with it. And this, within the pop medium, brings an intimacy that seems somehow more urgent.

Of course, Bonner is a choir! Choirs aren't "about" soloing, but they are about storytelling. The highest levels of success for Bonner come when the songs and arrangements call for their creative, intricate choral delivery. Baba Yaga is a standout for its intensity in this area. And every track has its memorable moments. But when the song seems to call for something fully exposed, something with abandon, Bonner does sometimes give us something finessed instead. When the choir brings both to the table, the group is unstoppable.

Listening to Bonner Jazzchor takes me back to my youthful days in high school — only this group sounds balanced. This German choir takes its harmonies to a whole new level by mixing choral music with modern elements of contemporary a cappella.

Der Tag ("The Day") kicks off TAKE ME OUTSIDE, setting up the sound that a listener would expect from this established group. The track feels like a well-polished ebb of vocal harmonies. Although I don't understand the German lyrics, it sounds like a very welcoming and soothing experience. One thing lacking about the overall sound of the group, however, is energy, and this is uniformly observed throughout the album. Singing pianissimo or mezzo-piano doesn't necessarily mean losing energy, but this is a mistake that the group is evidently committing here (Green Garden, Break of Day). The energy only comes during the loud passages. On the other hand, in Liquid Spirit, the clapping and snapping must have helped in setting the groove to bring out the vocal grit and energy.

The arrangement styles of each song are obviously well-thought out and not what I would consider weak (notable arrangements include Don't Wanna Dance, Baba Yaga, Tainted Love, and Diamonds and Pearls). I really admire the arrangement ideas of each song — everything seems appropriate and not too much.

Although the good factors of TAKE ME OUTSIDE do outweigh some weak factors, the group needs to work on exaggerating expression and energy on its recordings. Vocal jazz, after all, is an art that requires a lot of vocal confidence to make it sound convincing and believable.

Bonner Jazzchor's TAKE ME OUTSIDE demonstrates enormous musical ambition but has some rough edges along the way. Such a strong foundation and varied toolset are too good not to get the polish they deserve in the future.

From the moment Der Tag began, I was hooked. Bonner Jazzchor's core sound is crisp, warm, and filled with subtle dynamics at every turn. Every voice part holds its own without overstepping its boundaries. The bass section, especially, is wonderfully supportive to the rest of the group. Part of this is owed to incredible production work, but many of this album's feats cannot be accomplished without the solid foundation of great vocals.

For the most part, I love Bonner Jazzchor's use of jazz harmony substitutions, unique vocalizations, percussion, and sporadic major changes of pace. The wide array of arrangers is a huge asset to the group, one that I hope it continues to employ. For how strange and cool each arrangement is, the songs manage to stay coherent with each other over the course of the album. Baba Yaga deserves a special shoutout for being so over-the-top, yet so captivating in its chaos all the same.

There are some consistency issues with the group's strengths, however. As I mentioned, I love the strange sounds and arrangement additions to the group's core sound. When these moments don't land, however, they become distractions to otherwise strong songs. Tainted Love, for example, is a victim of its own ambition — there are so many ideas attempting to be incorporated that they instead cause the song to lose focus.

There are also extended sections without any development whatsoever, which can make them overstay their welcome after being introduced. Green Garden, for example, sounds awesome but feels a minute longer than it should be.

Soloist work varies a lot on the album. Melody singers in Bonner Jazzchor can be super expressive, even as groups in unison, which is incredibly hard to do. Don't Wanna Dance and Human are great examples that include entrancing multi-soloist unison singing and a single strong soloist, respectively. Other times, however, singers can be hesitant and hold back a lot of potential color and energy. September, for example, struggles to captivate due to lack of vocal expression despite its beautiful lyrics.

Issues aside, this is a thoroughly good album with some absolutely gorgeous content. The only thing keeping me from giving TAKE ME OUTSIDE a higher rating is simply the limited use of its own virtues. I look forward to hearing the next project by Bonner Jazzchor, and in the meantime, TAKE ME OUTSIDE is an incredibly diverse and replayable project.