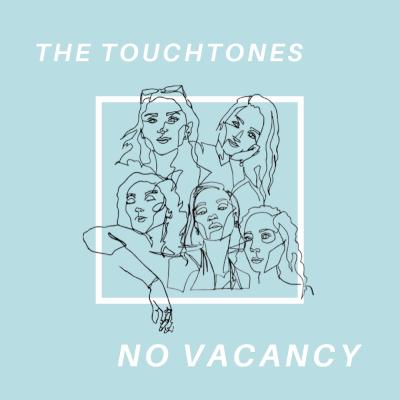 Bold, and yet also moody and reflective in its sonic landscape, No Vacancy seems to be another example of the effectiveness of producing a focused, albeit brief project. In general, what works well for The Touchtones is a clean, rounded, and nimble aesthetic to the group blend that allows the album to go down smooth. While there's often a tendency lately for groups to sound a bit crowded or eclectic in their sound to engage the listener, I appreciate The Touchtones' ability to accent with certain syllables where necessary to add texture while still remaining musical.

The album begins with Somebody Else, which I find to be a smooth and sultry introduction. Even from the first few notes, I can detect potential energy subtly but audibly bubbling underneath the surface. What's particularly strong about this performance by the group is the journey from start to finish, starting from an open softer dynamic with room to expand and gradually engage the listener over time. The "ooh"s and "ahh"s swell nicely and point the song forward until it reaches a healthy peak around 2:50. I also like the punchiness of the vocal "snare" throughout.

Too Good is the highlight of my listening experience on this release. I feel this song really exemplifies how the blend and sonics of the album succeed in general. The production on the vocal percussion really allows the recording to sort of shimmer. There's a lightness to the delivery of background vocals but also a warmth as well that rises and falls at the right moments. This ultimately pairs well with an equally compelling and tender soloist performance that should win over most fans.

No Vacancy is a polished product and a great sample size as an introduction to the group. While it might not have the sheer volume for those looking to perhaps sink their teeth into a proper album, the brevity, in this case, seems to promote solid all-around consistency leaving little room for fillers and sweet nothings.

The latest EP from Cornell's Touchtones, No Vacancy, is largely plagued by repetitive monotony and excessive timidity, neither of which allows the listener to get to know the group or its personality. The result is a small group of consonant songs teeming with potential but lacking direction or ownership.

In theatre, actors are taught to make strong, bold choices rather than noncommittal, timid ones. Recorded a cappella can be similar in the analysis of intentionally conceived choices on the part of the arranger and execution on the part of the group. Unfortunately, too often in this instance, The Touchtones don't seem to make or follow through with strong choices, leaving the covers sounding uncertain where the group's plan is concerned. A prime example of this is Ain't Got Far To Go, which is taken at a notably slower tempo than the original. This could perhaps be justified with more decisive choices, but with an overly light percussion line, very little dynamic interest in long notes, and quiet vocal presence in the solo and background shout chorus, there is a lot left to be desired and the slower tempo feels like a mistake or haphazard. (This reviewer gave similar criticism to this group for Runaway Baby on its last EP, Evolution.) This lack of clarity takes a slightly different form in songs like Queen, in which the extreme repetition is not marked by any kind of growth or journey, resulting in a monochromatic monotony.

There are some bright spots on No Vacancy. Somebody Else, an already chill song with a subdued vibe, is captured well by The Touchtones in Julie Phan's arrangement. The color of Shaye Miller's voice is very appealing and a standout in the middle track, Fragile. The chord choices in Gabrielle Maurer's arrangement of Ain't Got Far To Go are some of the most interesting on the album and are a great example of some of the potential for the group going forward.

With some more attention to devising and executing strong choices, The Touchtones certainly have the potential to surpass the "3" barrier, but No Vacancy stands as a continuation of the group's last EP.

No Vacancy is a short and low-key listen with a lovely sound. Unfortunately, that lovely sound is sometimes undermined by non-ideal decisions in arrangements and execution.

I want to draw attention to Queen, the album's second track, which features two soloists in a call and response style throughout. The idea is good, and there's some great vocal intensity going on ("girl, that's all right!" — I love it!), but because the two singers are in the same range and their vocal timbre is similar, the execution becomes messy as the track goes on. Stronger decisions need to be made regarding when the vocal lines are together and when they are separate. When the "response" voice is playing off of the first soloist before the line has fully cut off, but the notes are either the same or very close (e.g. the "am I a freak" verse), both lines suffer.

Fragile is an excellent example of how a very small pitch shift could better showcase both soloist and background vocals. The first chord does not land because the low alto line feels too low for the singers to hit reliably. The solo is a lovely performance by Shaye Miller; she has a beautiful tone that really shines on the chorus, but the verses feel just slightly too low and don't ring as clearly over the higher background vocals.

The final track, Ain't Got Far To Go, has a couple of tempo shifts that are not informed by the main beat of the song. The beginning of the track is just slightly slower than the rest of the song, which makes the beat drop feel jarring, and there is a very sudden ritardando towards the end of the track (just before the octave-unison section) that sounds almost unintentional. The ritardando also feels like an ending fake-out, which makes the actual ending of the track feel a little underwhelming.

No Vacancy could really benefit from more consistent decision-making throughout each track. The sound and the ideas are good, but the execution needs fine-tuning.

No Vacancy streams on Spotify.