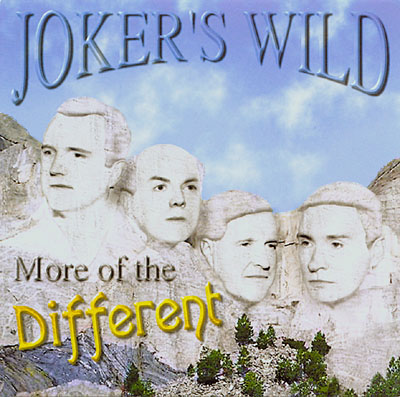 Joker's Wild is a barbershop group. A damn fine one.

I just thought I should put this out there because it explains all that is right — and all that is, uh, iffy — with their new CD, More of the Different. In concept, it's a familiar story: award-winning SPEBSQSA quartet decides to branch out of the old style repertoire and release an album of jazz and doo-wop classics instead.

Hey, as high concept albums go, it's not as out there as "plucky young college students make '80s pop music with only their mouths".

Joker's Wild, despite their new tunes, remains a barbershop group thick and thin. As such, their wildest success comes when they do their pop standards in classic barbershop style. Their rendition of Patsy Cline's Crazy was blissfully beautiful, and the tag on Operator (an old-timey gospel number) rings enough for a four-alarm fire.

Most of the album is like that, so if you like barbershop and don't have a KIBber ["Keep It Barbershop" purist] complex, you should go ahead and order one.

And yet, Joker's Wild is no Acoustix. They don't quite have the panache to create more than a quizzical atmosphere with Happy Together, the barbershop fusion track that opens the album. Nor do they have the sense to bring in a guest soloist for parts that are beyond their ken. David Wright did a bang-up four-part arrangement of We Shall Overcome, and it's got some yummy tag bits, but this quartet was crazy not to bring in a real gospel singer for the gospel overlays. Instead, we get a barbershop tenor who is more Elmo than Aretha, and it spoils the effect.

An overdose of studio effects also interferes with album continuity. Love Me Tender, for example: it's Elvis turned barbershop ballad, not a Queen song. It doesn't need to slap its audience upside the head with a can of extra-strength reverb. The audience might be unconscious by the end of the song, which would be too bad, because the Love Me Tender tag is world class. Unlike most world class tags, it's subtle, a dynamic tour-de-force, a tag truly deserving of superlative cliches.

More of the Different is an excellent album, full of ringing chords and energy and a lovely blend. It's just that in places, it could have done with a little more of the same.

I'm not the world's biggest fan of barbershop. You all know that. It's not a big surprise. In More of the Different, Joker's Wild does a fine job of attempting to convince me otherwise. While the attempt could not be called a complete success, there are several reasons why this barbershop record was not as onerous to listen to as others I've encountered. The best thing about this disc is that Joker's Wild keeps the tempo and mood of the album mixed up; the songs vary from upbeat and happy to slow and mournful, and everything in between. I like that. They successfully achieve that harmonic ring that's so imperative in barbershop. (See? I'm learning!) They do a really great rendition of a German song — I have no idea if the song was originally intended for the barbershop style, but Joker's Wild have a lot of fun with it.

On the flip side, the solos fail to impress me much. I know I go back to this point time and again, but I can't be moved by an album where the soloists don't give me shivers at least a couple times. I can tell that these fine gentlemen are expressing themselves as best they can. I can hear the emotion. However, their execution, while poignant, is not particularly mind-blowing. Therefore, in the end, I can't in good conscience give More of the Different an "excellent" rating, but I do give Joker's Wild kudos for creating a fun and immersive barbershop CD.

More of the Different by Joker's Wild from beginning to end is a solid album. The presentation is good and the singing is excellent. The only issues I have with this project are in the production and track selection.

Throughout the majority of this album I felt that there were serious mixing and mastering issues. I'm not sure why they felt it necessary to accentuate every sustained chord by mastering it at ludicrous levels in the mix and adding massive columns of reverb to it. In many songs, primarily in the final chords, I found myself wincing and physically being forced to move back from the stereo because these chords were too big. It felt as if Joker's Wild were in the room with me, bellowing full force at point blank range. You can sing with power and successfully convey that feeling to your audience without mastering at such high levels. A suggestion may be to use different mic-preamps and sing to the lower end of the equalizer. The only thing that didn't ruin these chords for me is the fact they were right on pitch. If they were using this mastering technique with out of tune chords, we'd be having some serious words right now.

The track list was, as best I can say, interesting. Wir Machen Musik was a fabulous addition to this album and actually my favorite track. In this track all of the levels were at the "normal ear pleasure" setting and you can just see the guys smiling as they sing this one. Then, of course, you have your standard four-part barbershop tunes all over the album, but the big change here is that they did a few that I would not consider in the realm of barbershop music.

An adapted version of The Nylons' rendition of Happy Together leads off the album and later you hear We Shall Overcome, an old African-American spiritual and civil rights anthem of the 1960s. I'm a huge fan of gospel choirs, such as God's Property that have performed this spiritual and spirituals like it, so I was a bit worried about Joker's Wild's barbershop presentation. After a few times through it, I can truly say that I applaud their effort and interpretation of this classic spiritual. I always encourage musical risk and expansion, but in this case I would advise away from this style for future albums. It's a great song, but it's not meant for four-part barbershop groups. Songs like this require a deep soulful sound that just wasn't there from Joker's Wild.

Aside from my personal issues with the production and certain songs on the track list, this really is a fabulous project. These four guys truly understand the art of singing and perform very well together. Any barbershop lover would truly be missing out by not adding this album to their collection.

For proof that Joker's Wild is one of the best men's quartets singing today, just listen to More of the Different, a collection of thirteen near-perfect barbershop classics that will convert more than a few a cappella fans to the barbershop fold, and surely win over as diehard fans any barbershoppers who don't love Joker's Wild already.

Precise entrances and cutoffs, impeccable intonation, and a blend you wouldn't believe show up on every track. And if you're looking for overtones, Joker's Wild has them in spades. Layers upon layers of unsung notes ring and resonate like a barbershopper's fantasy. If you don't know what I'm talking about, get this album. You won't believe your ears.

If I have one caveat, it's the booklet: a visually stunning (and clever) album cover fronts a very spare interior. There is no information about where these guys are from, or how long they've been singing together. I would have liked to know more about their other albums (if any), what year they won their international title, and maybe a word or two about each song. Barbershop music is so history-rich, and knowing the anecdotes behind the songs can really make them come alive.

More of the Different is an outstanding album by one of the best quartets you'll hear. You won't regret the purchase.

Joker's Wild is an International Quartet Champion of SPEBSQSA (Look it up. I'm not going to write it all out!).

The extent of my barbershop a cappella knowledge is watching those four guys in The Music Man. (Starring Shirley Jones, that guy from The Last Starfighter, Ron Howard as a lisping little kid? No? OK.)

So when I hear what I think of as barbershop on this CD, I like it. There are cheesy, cute lyrics like in Sudden Love: "Mercy is it hot in here, or baby is it you?". On most of their songs, they have a great blend, employ nice harmonies, and are definitely "machen musik". I find barbershop a very distinct genre, and More of the Different is at its best when it's more of the same.

A few things that bothered me:

The words "It's gotta rock", used freely in their artwork, have never in my mind been associated and still aren't associated with barbershop. Of course the hologram that flips between Mt. Rushmore with the right heads and Mt. Rushmore with Joker's Wild heads is pretty cool.

In the songs they would have you believe make them different, the bass often sings "bom, boms" and "bow, bows" a la contemporary a cappella. It doesn't work. By placing his voice high in the mix during those songs, blend is lost, especially in Happy Together, when he grinds his voice from note to note in a fairly annoying fashion.

Also, I found listening to We Shall Overcome by four white guys a bit humorous. Who wouldn't? I will refrain from further comment on this!

If you are a barbershop fan, get this CD. Anyone with more contemporary tastes, this is not the CD for you. Maybe for your grandmother?

CDs are $17, cassettes are $12. Order forms are available on the Joker's Wild website (jokerswild.freehomepage.com). This music is now also available for download in individual tracks from the best digital distributors (Napster, MusicMatch, Rhapsody, MusicNow, etc.) The group, now retired, may still be contacted by fax to (724) 935-7873, by e-mail to: jokerswild@clunies.net.