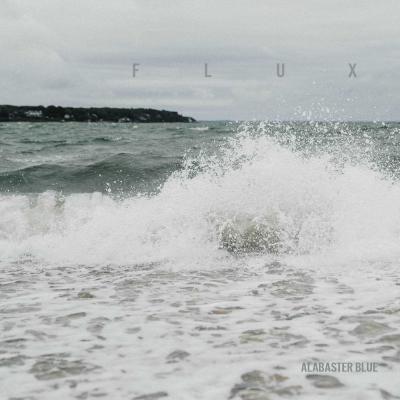 The name of the album is Flux, but it is solid through and through. Alabaster Blue, from the University of New Hampshire, has a consistent sound throughout this release. This makes sense because most of the tracks are arranged by their music director, Pat Berry. Each song has growth, an emotional undertone, and an honest tether that carries the listener through without feeling repetitive in the slightest. This is collegiate vocal arranging at its finest.

Alabaster Blue has a knack for picking powerful songs and singing them with the heart and passion they deserve. And I will always encourage understanding where one's talents lie, and using these talents to their fullest. However, this also makes the album as a whole feel very monochromatic. Cool, edgy, crunchy chords and emotive solos ... it's certainly cool, but eight tracks later, it begins to fade into background ambiance.

Deeper is a nice opener with some driving high hats in the percussion, but it's the next two tracks that are really standouts. New Rules has some really creative arranging and dynamics choices, including a single line in the chorus reminiscent of classic Daft Punk. Liability / Reprise has an authenticity that is hard to find, though the group comes close on Lay Me Down / All I Ask. Evergreen's opening trio has enough attention grabbing power to draw the listener's attention right back for the end of this eight-track journey.

The only critiques I have are that River might not be the right song, or at least in the right key for the soloists, and there are a few times on this album where switching to a soloist with a deeper voice from a soloist with a higher voice is jarring in the mix (River, If She Going). The deeper singer seems to come in a fair bit louder than the singer that preceded it.

These are minor issues and don't take away from the overall experience. This is an album worth adding to any collection!

Flux, the latest from UNH's Alabaster Blue, is refreshing in some ways, and drags a little in others. Overall, it's an album I really enjoy, and leaves the group a few areas it can aim to improve on in future endeavors.

I assume anyone familiar with current, contemporary collegiate a cappella has noticed that we tend to get a number of albums featuring a dozen slick tracks with amazing soloists wailing on the latest Billboard Top 20 hits with overly emotional backings. On this point, I enjoy some of the ways in which Alabaster Blue goes in different directions. While the group does have some of the obvious "popular tracks to cover", the singers also feature some lesser known or up-and-coming artists and songs, like Lorde's Liability / (Reprise) and YEBBA's Evergreen.

Alabaster Blue also has a few instances where it takes originals done by a single solo artist and re-assigns the lead to multiple people, as well as tracks where the group plays with gender assignments, which I really enjoy. It gives the singers a lot of flexibility to highlight different strengths in the arrangements, add nice harmonies, or embellish the originals a little more. Liability / (Reprise) is a nice example of this, with Pat Berry (the group's Music Director, who also arranged most of the album) tackling Lorde's original. It's a great fit for him, especially highlighted by the line, "But you're not what you thought you were", which gets dropped down low for the emotional point of the song, then thrown up the octave as it picks back up. Berry placed this excellently in his range, and it works with the different feel of the song.

Another place where I really like the changed/split solo is on New Rules. I enjoy that the group not only splits the solo between three people, but that the arrangement includes a male solo (Matt McGrath) in addition to the two ladies (Haley Dumaresq and Brianna Clark). I'm always a fan of playing with gender/sexuality in covers, and it is kind of fun to have a guy singing, "I keep pushing forwards but he keeps pulling me backwards". Overall, New Rules is far and away my favorite track on the album. It is — as I believe the kids would say — A BOP. The production is also excellent — I wish I knew whom to credit for the work. It has lots of moments of electro-flair that land excellently and help spice up the fun arrangement. I won't share how many times I've listened to this version already, but it's been stuck in my head all day while writing this.

The album as a whole tries to capture that club music style, and it works better on some tracks than on others. River is the one that falls the flattest, in my opinion. Having seen the potential both from the arranging work as well as the production on something like New Rules, it feels like there is little in the way of dynamics or standout moments on what should be an easily impactful song. The other weak point is the mashed-together Lay Me Down / All I Ask. The arrangement is trying a little too hard compared to the rest of the album. It would work for me as the Act I finale of a Broadway show, but doesn't quite fit in with the rest.

Alabaster Blue has a lot to be proud of on Flux. It's not only a ton of fun, but the group carries some real emotion into what could have been pretty uninteresting "club" tracks. The group also highlight a lot of strengths in its singers. I hope Alabaster Blue carries a lot of these same successes into future recordings, and I'm excited to see what comes next for the group. New Rules is certainly going to be showing up on a lot of my aca-playlists from now on.

Since I'm returning from a two year reviewing hiatus (Hi everyone! I'm back!), maybe it shouldn't have come as a surprise to me that my first review would take a bit of time to get into the groove. I certainly have my issues with Flux, the latest album by UNH's Alabaster Blue, but I'm all the more happy to report that this mixed group has produced a solid, confident, and ambitious album that, while not without faults, accomplishes what it sets out to do.

It's always interesting to see how a group chooses to open an album. Deeper is an instructive choice: the original was performed by Ella Eyre and is groovy, but not nearly as polished and electronic as the Alabaster Blue cover. If the vision was to create a club tune from a jaunty indie tune, this group accomplished it admirably. The implied mission statement is to make an album of transformative covers instead of imitating the originals, which is laudable regardless of success. This start bodes well for Alabaster Blue.

If I didn't find much to mention about the second track, New Rules, maybe it's because the next track is my personal favorite. In a departure from the electronic sound of the previous tracks, Lorde's Reprise of Liability is arranged as a gorgeous choral piece, with some great moments (the high pipe-like sustained notes before the bridge deserve special mention), and an incredible (gender swapped, which as far as changes go is as simple as it is effective) solo by Pat Berry, who not only arranged this piece but also the two previous ones. His performance is fragile and vulnerable, but his vocal control is the same as he demonstrates in this arrangement and others on the record.

Before we move on, a word on liner notes, a rare sight in the age of Spotify. While soloists, percussion, and arrangers were provided by the group, I found myself wanting for additional information that liner notes should contain. The varied and effective production deserves mention across the album, generally and in a few spots in particular. For digital music, listeners should still be able to easily find online who produced, tracked, mixed, or mastered any of the tracks. Similarly, original artists (let alone the composers!) covering the tracks are helpful, too. I appreciate that this information is rarely available these days, but that doesn't mean it ought to be so. As for posting the credits for its next album, the group might benefit from checking out my esteemed fellow reviewer Jonathan Minkoff's thoughts on the matter.

Back to River, another Berry arrangement which is a somewhat angsty, slickly produced cover of a more jarred, angular song until the second verse kicks in and the soloist changes from Sarah Drake's angry mezzo to Alec Paulson's smooth bari. I have some issues with the track overall (the drum solo could be about a quarter the length, to name just one), but that change and the subsequent development provide great effect both sonically and narratively.

Of the remaining songs, I want to highlight Lay Me Down / All I Ask, a Sam Smith/Adele mashup/medley. Sean Vigeant sings Lay Me Down over an appropriately saccharine backing, but as soon as Alison McCarron takes over with All I Ask the song picks up steam and is more reminiscent of Florence and the Machine than Adele at some points before transitioning into what is for all intents and purposes a Broadway finale. There's some lovely counterpoint between the soloists with their respective themes, then a somewhat unnecessary breakdown before the big, massive finish. While the song doesn't hit all of the marks, it hits most of them really well, and in that it's quite representative of the album it is on.

A few moments in other songs that shouldn't go unmentioned are the great groove (Pat Berry on vp! Is there anything he can't do?) and solo (Matt McGrath, also vp on River and Evergreen) on If She Going (opb Union Moon). Also, the fantastic drop in 2U, another Berry arrangement that uses two soloists to great effect.

Overall, I enjoy this album, and what I've heard suggests that Alabaster Blue (and the group's fearless leader Pat Berry) had a very specific intent for each song which the singers mostly accomplished admirably. Some of the details are questionable, and a few songs are not to my personal taste. I think Flux is an album that Alabaster Blue should be proud of — it's a demonstration of confidence and vision, and even if there are some flaws in the execution, it is worth listening to.