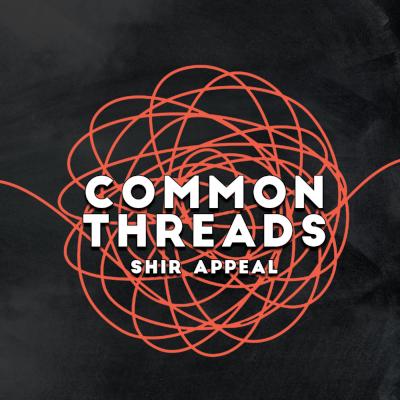 It is always enlightening to dive into a Shir Appeal album. If you are a fan of this mixed group from Tufts University, you know exactly what to expect. This is the third album I have reviewed (Linguistics and Perspective being the first two), and all three have displayed an impressive array of influences with their "common thread" in Jewish heritage. With styles ranging from traditional folksy to pop, and languages ranging from Hebrew to Spanish to English, every song is arranged with lush harmonies and recorded with utmost precision. You could replay Common Threads 100 times and on the 101st listen still find a new countermelody to enjoy or an aspect of Jewish culture to explore. Here's what I uncovered on my first five waves of listening.

First wave: Yo M'enamori. Of the twelve tracks, this one grabbed hold of my ear and would not let go. The arrangement is minimal — just enough to set the mood and leave the stage wide open for Micaela Silver to glide through the verses and let loose on the runs through the chorus.

Second wave: In a sea of legato, drawn out phrasing, Eden and A-Ba-Ni-Bi stand out. Eden is everything you want from a contemporary chart topper. The arrangement is punchy, with backgrounds cycling through changes at a danceable clip. Rhythmic syllables, open block chords, and harmonizing with the lead all over a slightly overdone percussion loop. A-Ba-Ni-Bi tries to be light, emphasizing mostly upbeats, but drags too much to be a really energizing point in the repertoire.

Third wave: Isaac. One of only three songs in English, it is an anchor when you need something to which you can sing along. The arrangement isn't a showstopper, but Noah Smith lends his smooth bass register on lead vocals to make a calming sojourn into indie folk.

Fourth wave: What is there swimming beneath the surface of minor keys and half notes? TREASURE! Kol Haneshamah is an epic hands-to-the-sky spiritual. Meah Achuz Or is a complex narrative, sometimes wading in patient ambiance and other times bursting with emotion. Like the Dawn and Healing are similar, exchanging some of the twisting for a more familiar ebb and flow. Romemu and Shelo Nevosh just groove. These six tracks tonally blur together, but the more you listen the more you fall for each individually.

Fifth wave: Senbet Leyunate and Tzion are similar to what I heard on the fourth wave, but with less momentum. The arrangements on Common Threads do not hinge on climactic moments, but rather revel in a mesmerizing, chant-like state. In this case, there is a fine line between mesmerizing and droning that these two songs don't make it across.

You could listen to Common Threads 100 times, but should you? My hesitation is the same as it was with the last two releases from Shir Appeal. The musicianship and multiculturalism impart a generally good feeling, but there is rarely a torrent of emotion to keep me coming back. The constant backdrop of block chords blunts the dynamic peaks and troughs, sacrificing spotlight moments for the safety of a cushy blend. That trademark rich sound works well for big numbers like Kol Haneshamah. As the group does with Yo M'enamori and Eden, it would be great to hear Shir Appeal streamline, lighten up, and wail.

I have long lauded Tufts Unversity's Shir Appeal for its multilingual album projects. Common Threads is no different in this way, with arrangements of songs in English, Hebrew, Amharic, and Ladino, the latter two languages of which were heretofore unfamiliar to me. From educational and conceptual standpoints, Common Threads has a great deal of value, but it leaves much to be desired musically and feels like a step back from Shir Appeal's past few albums.

The first few tracks display a personality that has been somewhat of a trademark for Shir Appeal in the past: specifically, the refrain in Romemu being reminiscent of the buoyancy in a favorite of mine, Chalonot, from Perspective. There is a certain exposed quality in many solos, and the other sections in the song are stagnant dynamically. Unfortunately, this becomes more of a trend as the album wears on. The chords in Eden are voiced well, but the dynamic flow through phrases and articulate energy feels lacking. In songs like Tzion and Isaac, repeated phrases drag on with a monotony that could use some direction dynamically or texturally, or else be omitted or reduced somehow. From a dynamic standpoint, there are moments in Healing in which the soloists and backgrounds are not in concert and this contrast does not serve the product as a whole.

Soloists receive an "average" rating here because, while not displeasing, the expressive quality is not overt. For example, the "ah"s in Yo M'enamori are little more than just "ah"s; without variations in tone quality or dynamics, the emotions conveyed within such a stretch without words are sometimes indistinguishable. Across the board, solo and background voices alike could benefit from a sense of urgency where energy is concerned. The more impassioned musical moments feel laid-back, creating a dissonance difficult to rectify as a listener.

Meah Achuz Or features a notable background intensity and reverb with the trio of Micaela Silver, Maya Lazarus, and Maia Goldfarb that creates an allure seldom heard on the rest of the album. Arrangements by alumnus Louis Ades (a current RARB reviewer), including Senbet Leyunate and A-Ba-Ni-Bi, feature a strong, fleshed-out foundation that stand out as cohesive. The moods captured from the various cultural influences are certainly unique, perhaps none more so than the Amharic song, Senbet Leyunate, and the Ladino piece, Yo M'enamori.

In appreciation of Shir Appeal's legacy and tradition, Common Threads is worthwhile as part of the group's output of projects that blend cultural differences. With more focus on purely musical elements, I look forward to the group's future endeavors.

In many aspects, Common Threads is almost perfect. There's only one detail that should have been given more attention — pronunciation of the Hebrew words, especially since most of the songs are sung in this language. Specific examples include Romemu, A-Ba-Ni-Bi, and Shelo Nevosh. Other than that, Common Threads could have been the ultimate Jewish a cappella album in my collection rack. Although this lack of attention to this one little, but important detail does not ruin the listening experience, it's quite clear that songs are sung by a foreign tongue. Accents will sound funny to some, and the westernized Hebrew words might not click to a native speaker's ears.

Now that I've highlighted the language, it's safe to say that everything else is great. Shir Appeal has a well-balanced sound when singing homophonic lyrics/syllables. Also, I can't ignore the amazing work from Plaid Productions, especially in the vocal percussion production. Vocal percussion doesn't usually get a lot of credit in the recorded a cappella scene, but this album is setting a standard. Eden is one example — the vp might not sound organic, but it sounds really good. However, I think it's worth mentioning that the sound quality of vp editing/production work has a noticeable decline on the succeeding tracks. It's not as good as Eden, but it's not bad.

Shir Appeal has a knack for rearranging music to suit the group's musical taste, and it turns out, sounding much better than the original. Romemu's chord progression/song flow is modified a little bit to add shine to the song. A-Ba-Ni-Bi's tempo groove is also changed to dotted eighths, which makes it sound jazzy-ish. This tells me that the group's musicality influences the music the singers perform and not the other way around.

My favorite tracks so far are Eden, Tzion, Meah Achuz Or, Yo M'enamori, and Isaac. Kol Haneshamah almost made it to my list but the lack of an exciting build to a chord-repetitive song makes it anticlamactic. Arranging music with repetitive chords and lyrics needs a proper storytelling style to pave way to a great ending — but that's just me being picky.

Common Threads is one of the best Jewish a cappella albums I have ever heard. It's not perfect, but it's great overall.