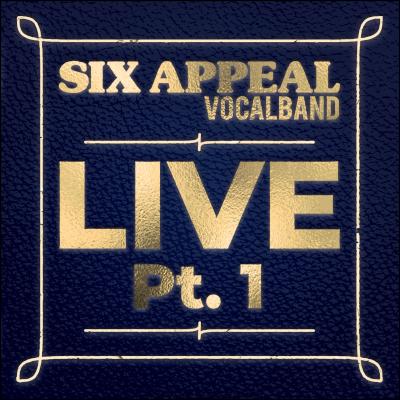 I'd heard a lot about but not a lot from Six Appeal, that hyper-electric band out of Minnesota who came to take the a cappella community by storm. Full of bombast and bravado, the guys of Six Appeal deliver an excellent follow up to their two previous releases, Plan A and Ugly Sweater Party, with the album Live, Pt. 1. With some crackling energy, the recording leaves no doubt as to why these guys are Harmony Sweeps National Champions and Grand Champions of the 2019 Moscow Spring A Cappella International Festival. It's not an album that you'll listen to a lot, but it's one that you definitely want to have in your collection for that "I knew them when" moment in the not-so-distant future.

These guys are excellent showmen and musicians. Even if there weren't family members in the group, they have such incredible vocal qualities working together that if you'd said they were all brothers, I would have believed you. The harmonies really mesh well together. The arrangements are pretty basic, but they do the job and have a sense of playfulness about them. Arrangers Michael Brookens and Jordan Roll know how to construct vocal patterns and rhythmic passages that highlight the skills of the performers and play up to their abilities.

The major issue with most live concert albums is the extraneous spoken moments that take you out of the listening experience, because you weren't there to experience it with the audience to get all the references. This mix is very forward; it sounds like the recording is taken from the soundboard and edited heavily to be crisp and ever-present. Instead of getting the feeling that we are in the audience listening to the recording, I feel like I'm up on stage with the guys listening through the monitors like I'm a seventh member (one can dream). And you can edit out the random audience comments that seep through, so again, jarring but not altogether unpleasant. And unlike studio recordings, you are getting just the group (not unfiltered because they do use effects on a few tracks, especially Tell Me Something Good), so tracks that could have benefitted from additional pads, or extra layers for umph are good, but not stellar (listening to you Circle of Life — and what's the "Sorry guys, get out of here" line about — see earlier reference to not knowing what's happening on stage). Another live issue can be balance, and Iris doesn't fully gel during the middle of the track, and the background of Kiss sounds so swallowed.

I wish I could have heard more of Reuben Hushagen's bass throughout the album, but especially on his solo call-out on Happy at the end of the show. He all but disappears when he should be thumpingly highlighted. Berko is just the right amount of showy as a vocal percussionist. The Brothers Jones (Trenard and Evan Taylor) round out the band with a distinctive sound that is captivating.

As I said before, this isn't the best album out there, but I think it'll be an essential one for audiences. Can't wait to hear what's coming out on future recordings.

Six Appeal boldly goes where few other vocal groups have gone before with Live, Pt. 1, serving up nine live recorded tracks that display majestic vocals, infused with the group's incomparable character. But perhaps its biggest accomplishment comes in its ability to show that live a cappella can be just as stunning, loud, and exciting as any other genre.

There's no denying that studio offerings are many listeners' go-to preference. A clean, well-dressed track with minimal blemishes is hard to ignore. However, live recordings have the ability to offer a deeper, more human connection when done right.

And Six Appeal succeeds at this.

The group's energy is through the roof on Live, Pt. 1 and it elevates every track on the album.

The album's opener, Some Kind of Wonderful, starts off with a bang. The booming and bouncing bass keeps the song's momentum progressing forward, while the warm tones of the upper voices are allowed to round out the arrangement with color and zest. It's hard not to love the conviction and passion that Six Appeal presents on this track.

I Wanna Be Like You is a swinging, playful, and often complex track that is pure gold. Each vocal line takes on a life of its own due in part to Six Appeal's high level of musicianship. The group experiments with many wonderful instrument sounds all while remaining in the pocket the entire time. And the scatting is incredibly fun to listen to.

Other tracks such as Kiss and Tell Me Something Good do a fantastic job of showcasing the group's vocal depth and range. The arrangements at times can seem a bit unchanging, but they work to really solidify the group's soulful nature.

Listen to the Music is an absolute crowd-pleaser combining dynamic showmanship with powerful singing. When Six Appeal locks in on a big chord, it's downright glorious! And when the group wants to flip the script and deliver sincere emotion, as on Iris, it can do so in an instant. The arrangement serves up crisp harmonies and a well-balanced sound. This is the BEST all-vocal cover of the song that I have ever heard!

Every part must be stellar to deliver a great live performance, and one part that deserves immense credit is the percussionist. Six Appeal's vp is so clutch, rounding out every song with intricate rhythms and hits that create one satisfying groove. Part of the success of this release has to be attributed to the drumming.

The few critiques I have come mostly in the way of stylistic choices. I'm not a huge fan of some of the vocal effects, such as the grunts and theatrics on Tell Me Something Good. And for me, there are parts on Happy that just seem to drag.

Aside from this, I think an album like this is vital to the a cappella community. Especially when it's this good. Hands down, Live, Pt. 1 deserves a place in your music collection!

Those who have read my past reviews are well aware that I am hesitant about groups that release records of "live performances" for a number of reasons. Of those reasons, the biggest issue is that it's often very difficult to achieve the proper balance amongst all the voice parts, causing the tracks to sound muddled. Well, it turns out that I need to make a correction of sorts — as long as you are Six Appeal, then you have nothing to worry about.

I really wish that I had been in the audience for this performance. Not only do the six guys absolutely crush their set, but you can hear the excitement and energy on the stage through the album. That is definitely the benefit of recording the live shows — it can be difficult to recreate that performance atmosphere in the recording booth, and Six Appeal uses that atmosphere to its advantage. Whether it is talking to the audience or engaging in some playful banter on stage, it adds a little more color to the album that you simply cannot get from a studio recording.

As for the music, I am bopping my head and dancing in my chair from start to finish. As a Disney fan, I tuned in closely to both Circle of Life and I Wanna Be Like You, and the guys do an incredible job on both. The swing ending in I Wanna Be Like You is very smooth and nothing that I would have thought of doing, as the original is such a high energy song from start to finish. That being said, it works really well here and sets up the finale beautifully. Overall, it sounds to me that Brookens's arrangements take a little more risk and do some things that aren't as common in a cappella. Whether it is muted trumpets in Tell Me Something Good or the rockin' breakdown in the middle of Kiss where the focal point is being passed off between points, it is refreshing to hear new sounds and ideas brought to the medium. I can only hope more groups (be it scholastic, community, or even pro) look to Six Appeal's lead to incorporate these types of sounds into their arrangements.

One of my only criticisms is that I wish there was a little more on I Want You Back. After teasing us with N*SYNC (which is never mentioned in the liner notes) at the beginning, Six Appeal quickly transitions to Jackson 5's track of the same name and never revisits the N*SYNC intro again. While I am not the biggest fan of mashups, that could have been a good opportunity to combine the two genres and songs in the same arrangement.

Overall, Live, Pt. 1 is definitely one of the best live recordings that I've listened to, and it is definitely a must listen for all a cappella fans. Just two questions from me to Six Appeal. One, when is Live, Pt. 2 coming out? Two, can one of you teach me how to imitate the muted trumpet?