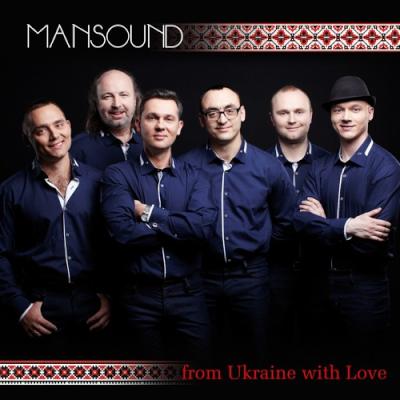 From Ukraine with Love is by turns inspirational, cheesy, musical, pitchy, solidly professional, and quite a bit out there. Based on my own encounters with the post-Soviet working musicianry, I guess that's par for the course.

Reasons to buy this album: you're looking for arrangements of otherwise hard-to-find Chinese repertoire, you are interested in Ukrainian musicians generally, or you belong to a gay men's chorus and you'd like to hear some of the same songs that you perform in a similar yet very different context. I do not say this to be snarky in the slightest, nor do I have any idea if the singers in this group would identify with that last demographic. For a modern Western audience, it's a pretty good reference point for hearing an all-men's party band cover Katy Perry, Lauryn Hill, and Bruno Mars, alongside a heartfelt and sincere rendition of You Raise Me Up.

I quite like the Chinese numbers, particularly Baikal Lake. I found the whole premise of multiple Chinese-language songs by a group from Kiev quite charming, and it sounds as though the group enjoys singing them. Chasing the Light is also lovely, while The Ordinary Road feels to my American ears like a pastiche of 1980s movie ballads I can't quite remember.

Hoi, tam u L'vovi is tons of fun, and also it feels like it comes from a totally different album on account of the chirpy guitar accompaniment and female guest soloist. I like it, but also I'm not sure what it's doing here.

Shchedrik is another outlier — better known in English as Carol of the Bells, the group seems to have applied a different set of production values for this track than the rest of the album. It also sounds identical to the version from its 2005 Christmas album, three tracks of which I found (somewhat inexplicably) on my hard drive, including this song under a different transliteration. The group's version is quite good, in any year and by any standard. According to the liner notes, about half the album was recorded in one studio and the other half at another. No dates, but there's probably a pattern there for those looking for it. Certainly the wordless jazz of Swingle-style Minuet and Peer Gynt keep up the better-production values trend.

Working-band pop songs form the heart of From Ukraine with Love: I feel they get the job done. Vilen Kilchenko is a great soloist, his colleagues mostly hold up their end, and the group has an excellent bass and capable percussion.

The album ends on a joyful, often comedic rendition of It Don't Mean a Thing that put a smile on my face and good vibes in my heart. From Ukraine with Love mostly sounds like it's very close to what this group sounds like live. It's a very retro sound by American a cappella standards, but it's also reassuring: if these guys were performing at your cousin's wedding, they would put on a show and you would have a good time.

If you're in the mood for something decidedly different in your a cappella listening experience — world music meets American hits with bits of comedy, classic jazz, across-the-seas folk, and even some sad fodder, too — Ukraine wrapped it up with affection for you.

In an era where the most successful groups are keeping a laser tight focus on concept albums, on creating a real thematic product that sounds like one unfolding story with a narrative arc, it's much harder to settle into and appreciate the extreme world buffet approach of From Ukraine with Love. Less of an album, and more of fifteen tracks (with a hearty offering of medleys) that the band must like, source material is definitely an issue here. ManSound, an all-male sextet, was brave enough to sing in multiple languages for this release to represent work from multiple countries (something many American groups wouldn't consider), but at least with the group's US-based material, this is far from the best music to keep covering worldwide. I appreciate the strong counterbalance of listening to the novel folk music much more.

Immediately after the group's cheesy "4th of July!" ending to Firework, we get a chance to hear the strong unified ensemble sound and balance of ManSound in Swan Geese. The peaks and valleys in trying to match the right songs to showcase ManSound's musical strengths while still being entertaining for the listener are quite marked in From Ukraine with Love. Songs that are silly and over-the-top got checkmarks from the band; likewise, overly dramatic fare (long passages with big falsetto spotlights, highly romantic crooning) appear regularly here, too. How, then, should I reflect on the outcome of having Hoi, tam u L'vovi become my personal favorite, with its genuine instrumental accompaniment (!) and female guest lead (!)? Well, the strings sound authentically joyful, and guest artist Oksana Bilozir adds a huge burst of freshness to this work. It's definitely the right source material for this group, and I'm so glad it exists. Even with the strings, it sounds way more organic (and incredibly more compelling) and than the cheeky Katy Perry we're-just-fun-guys opener, or the we're-just-cool-guys Shape of You and Uptown Funk tracks.

ManSound also loves vocal jazz. The standards, big band era favorites, and especially the lesser-known pieces come across strongly for these musicians in this genre. The buoyancy of Peer Gynt is particularly nice in the vocal jazz landscape. Production is quite light throughout From Ukraine with Love, letting us hear these enthusiastic voices unfiltered. The real treat, however, is ManSound's bass, who gets a fair (and well-earned) amount of time showcased on the jazz pieces, especially on Mask. His personality is big enough to fill up a whole record by himself, with technical skills to match. ManSound sure is lucky to have him anchoring its group.

We can't claim ManSound doesn't offer something for everyone; unfortunately, we need an album that sounds like there was a clear, agreed upon vision from the group, too. From Ukraine with Love has a lot of karaoke hits to bop to, and even on the folk songs, you'll hear familiar melodies. I'll take a ManSound album with less of the familiar and more daring risks the next go-around.

As "the leading vocal band in Ukraine and former Soviet Union", ManSound is back on the scene with its new release, From Ukraine with Love, which is a mix of both current pop selections from artists like Charlie Puth and Katy Perry, to folk songs from both China and the group's home country of Ukraine. As you listen to the album, however, it's clear that the group is very comfortable in the latter, with the former leaving a bit to be desired.

The first thing that I noticed in the more modern tracks is in the bass line. With Firework, the arrangement seems to be just a touch low for the bass, causing the sound to become very muddled as he's reaching to stay in key, most notably in the second verse. There are also moments where the bass line does not quite fit with the rest of the track, notably in the second part of the chorus. Here, the bass switches from a quarter note to an eighth note rhythm, adding to the eighth note rhythm in the percussion line and an added bass line on top of it. This leads to the three lines trying to compete with one another, causing it all to sound completely muddled and jarring from the tenor lines and solo above it. Along similar lines, the ending of Uptown Funk also sound very jumbled, where it seems as if the arrangement is too busy and is trying to accomplish too much. I don't think that there are actually too many parts going on — I simply think the mix was put together in a way that caused a lack of balance between all of the voice parts, creating a very chaotic ending.

The chaotic moments, however, are not nearly as much of an issue on the ballad or jazz tracks, and this appears to be ManSound's bread and butter over the last 25-plus years of existence. You Raise Me Up is beautifully sung from the whole group, particularly from the soloist Vilen Kilchenko. In this track, though, there is still a little bit of the bass issue where it sounds a bit muddled. I think it was just given too much weight in the mix; minimizing it a little bit would have fixed this problem. One of my favorite tracks, however, is a track that isn't fully a cappella. As on previous albums, the group includes some guitars and other instruments to add a little extra element to a track, and this comes back in Hoi, tam u L'vovi, which is a Ukrainian folk song. With guest soloist Oksana Bilozir, this playful song is sure to put a skip in your step. The album ends on a strong note with the Duke's Don't Mean A Thing, showcasing the jazz chops of the group. The harmonies throughout are really solid, and I really enjoy soloists Yuriy Romenskyi and Vyacheslav Rubel trading off the scat lines, and their attempts at sounding like a trumpet. Sure, it's a little cheesy, but it fits really well on this track.

Overall, it's a tale of two parts — the strength is in the jazz and ballads, and I think that ManSound has done a very good job with those pieces on From Ukraine with Love. However, if these musicans are going to be considered a great group across all of Europe (rather than just Ukraine), work needs to be put into the more modern songs to make the arrangements more complete and easier to perform across all voice parts, with cleaner and crisper mixes when recording.