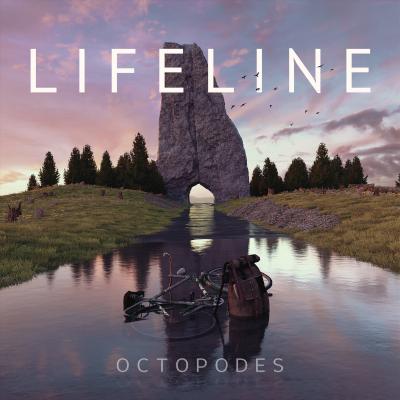 I associate the Octopodes with creativity, vulnerability, and consistently impressive sound work. 2019's Lifeline still checks all of the boxes that make the Octopodes so memorable and easy for listeners to connect with.

This round opens with the lip-pouty, finger-snapping club piece Alibi. It works well for an opener, though it's not representative of the power and imagination yet to come.

The production work offered by Liquid 5th is transfixing. You'll rewind multiple times; not to catch a lyric, but to sink into another impressive soundscape, to catch another impossible transition, to marvel at an effect or even the beautiful vocal balance and clean mastering from Eric Scholz. The Octopodes remain successful at creative arranging, but without production like this, their work just wouldn't gleam. Stargazing first captures our attention on the studio end, but the precision of Electric is nearly unbelievable. The timing, the layering, the continually shifting segments that only get stronger and more complex: if you're not sitting up and leaning forward, are you on the right record?

Great news: a cappella mainstay Hide and Seek still holds up in 2019. Here, the Octopodes demonstrate a full expressive range in their delivery, from nearly aggressive force to fragile vulnerability, and it works. The rawness felt in Hide and Seek gets an encore in Space Between, where soloists are given lots of room to sing their stories.

If the snappy jazzy opener didn't hook you, maybe some rowdy jazz will do the trick in Change of Heart, which is driven by exciting, song-shaping dynamics. Also exciting? A lead worthy of Beyoncé's microphone, which we get from Mellissa Picker on Halo. Arrangers Kahler Suzuki and Julian Dorsey deftly weave in a few Hide and Seek lines that complement the action nicely, too.

Lastly, O. Production throughout Lifeline could have stopped at your standard pop/rock filters with some copy-and-pasted drumming, but everything is custom and fit to size here, especially the work tailored for O. This leads to a powerful, nearly tear-jerking experience for the group's closer, built on an effective blend of spoken words, murmurs, heartbeats, and varied breathing from a clever arrangement penned by Suzuki, who also offers the high impact solo. Way to wrap up with a something to talk about.

I have lots of love for Lifeline: not what you'd expect, just what you need. Enjoy this impressive release from a reliably noteworthy group.

Remove the negative preconceived notions that are typically attached to a cappella recordings, from thoughts on a full-bodied sound to critiques on the art presenting mostly covers. After you have done this, imagine that music, like any other art form, can be transformed and morphed and is only restricted by one's imagination.

You are now ready for the brilliance and impact of Lifeline.

This new project by the JHU Octopodes is a testament to how progressive music will continue to be, if you have individuals who are willing to step off the path of stagnation and recognize an experimental world of what could be.

No moment on Lifeline is taken for granted as the Octopodes serve up a suspense-laden album of purposeful and methodical tracks of electronic a cappella goodness that sound pristine and also reverberate on an emotional level.

Stargazing is a great point of reference representing many of the best moments on Lifeline. The track has a strong progression, from its initial heavier tone all the way to its rhythmic dance stylings by the song's end. As a listener, you need something to latch onto, and the track offers just that through its expansive production offerings that are highly nuanced and a joy to listen to.

Electric shows the group's ability to generate a similar impact, but in a more subdued environment. Whether it's the scintillating tempo switch ups, the gorgeous use of harmonies, or simply the extraordinary female-driven lead, each movement works in tandem with the next, fusing into a wonderful concoction of dynamic moments.

Where the Octopodes truly flourish is in their transformative abilities to make a song their own.

No groove has been funkier, no sound has been tastier, and no track has sounded less a cappella than Change of Heart. You would think that the complex rhythmic lines alone are enough to leave you shouting for more, but this is only the start. The group takes electronic and flips it on its head into a jammin' neo-soul production full of smooth vocals and immaculate chords, stopping you dead in your tracks and wondering how any of this was possible.

The Octopodes continue their assault on your eardrums with a stunning, reimagined take on Halo that's choral, delicate and balanced, all culminating into a grand showstopping chord that's downright spiritual!

And the most angelic of singing is saved for the final track on Lifeline. O is filled with an abundance of airy textures showcasing a wide vocal and thematic range, detailed editing and gripping storytelling felt through emotion and pacing. The lead's delivery is so utterly gripping that you never want the moment to end. This is much more than a track; it's a powerful, stirring, and breathtaking performance.

I think that it's fair to say that when we look back on what had a hand in bringing about the next evolution in a cappella music, Lifeline will be part of what groups used as inspiration. This is an album that should not go unnoticed!

The Octopodes of Johns Hopkins University are a group of recent repute, not terribly far-removed from their ambitious all-original album project, The Kraken. An entire generation of college students later, the group still displays its musical mettle with this most recent album. Although it proves to be an uneven cover-to-cover listen with a stellar opening that trails off, there is a great deal to appreciate in Lifeline.

The first three tracks set a high bar in many facets: energetic background vocals, clear presentation of intentional interpretation, interesting rhythms, and solid stacking of often complex chords. Out of the gate, the raw energy and contained coolness of the Octopodes takes the Lawrence song, Alibi, and transforms it into a jazzy number right out of a speakeasy. Without skipping a beat, soloist Jeremy Earnest's strong turn on Stargazing is matched only by the great dynamic control of the background vocals and tastefulness of studio effects from Liquid 5th Productions. Electric keeps the momentum going with its continued strong background vocals, varied and well-developed sections from an arranging standpoint, and stylistically-appropriate solo embellishments.

Unfortunately, that's where the bulk of the praise I have for Lifeline ends, largely because of this one sentence: the strong opening tracks are followed by a cover of Hide and Seek by Imogen Heap.

I know it's 2019, but there are some songs that, no matter how much time passes, still should probably not be covered by an a cappella group not only because they've been overdone, but because the original songs are so difficult to cover, improve upon, or make one's own in a meaningful, artistically worthwhile way, and I firmly believe that Hide and Seek is one of those songs. I recognize that perhaps someday I will come across a stellar rendition that endeavours to do just that. But with its metronomic monotony with a few reimagined (see also: simplified) chords, this cover is not it and severely impedes this album as a whole.

The tracks that follow feel half-baked with exposed solos and elements that don't seem to match up in terms of energy, the balance between consonance and dissonance, arrangement innovation, studio work, and pace. Additionally, the penultimate track, Halo, seems to encapsulate the album in ways that feel final, only to move on to O, which meanders from a sense of album unity only to end on a weak, faded note.

Despite the missteps, there are musical bright spots throughout the album, and I can appreciate the musical prowess of this generation of the Octopodes. While I recommend the first three tracks most strongly, Lifeline is certainly worth a listen.