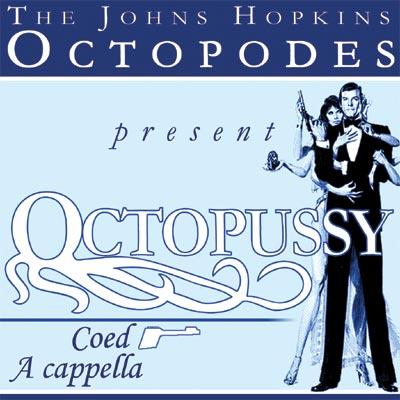 The JHU Octopodes have done some remarkable things in making Octopussy. According to the liner notes, the CD was "completely recorded, mixed and mastered in the closets and bedrooms" of group members and Dan Bui, another JHU student. I read this fact after listening to the first track, and was amazed. The recording quality is a lot better than many recordings coming out of professional studios, and I'm sure a bedroom costs a lot less.

Michael Vu was the primary engineer on the project, and he deserves a lot of credit for his good work. He also does the percussion on the album, and clearly spent a lot of time learning how to produce and layer it with skill. The tracks are frequently quite processed, and most of the time it is appropriate. However, there are times when it sounds like these guys got a little trigger-happy with their new toys. Come Undone, for example, has so much distortion on some lines that you can barely hear the words. Assuming this is the first major project they have turned out as engineers, I am willing to forgive them their excitement and am excited for them to hone their skills and learn to moderate their use of electronics when the talent of the arrangers and performers is sufficient.

Another remarkable aspect of the disc is its short length. With only seven tracks, the group was clearly able to polish their performances instead of rushing things to turn out 15 tracks so each member could get a shot at soloing. The track order is also well-planned. They start off with their strongest song, bury the weaker tracks in the middle, and anchor the final portion of the disc with the phenomenal penultimate track, Delerium and Sarah MacLachlan's Silence, as arranged by Off the Beat's Ian Lear-Nickum. The flow works well and keeps me listening through the end most times, so long as I don't skip back and forth between the two best.

Linkin Park's In the End is a great track. It features a dazzling arrangement, heavy but appropriate production, an entirely believable rap from Vu, and a solo by Ian Spicknall which starts off a bit too Broadway but settles into rocking when he kicks up the angst. Silence also benefits from a great arrangement and solid performances from both soloist Kristen Mugford and the background.

Each of the other tracks have flaws, but are still worth a listen. The soloists on Standing Still, Come Undone, and Tonight and the Rest of My Life have moments of weakness. The production goes a bit overboard on Fast As You Can and Push It, and Fast As You Can simply bothers me as a choice of cover for a cappella. I know Fiona Apple is cool and all, but I don't think the tune's crunchiness translates well.

In all, Octopussy is an effort to be applauded. Its home-brew nature is a signal of greater potential for groups with less money and the inclination to learn to do the work themselves. And the performances are solid. Good work!

Neat arrangements, fun songs, and clean vocals punctuate this release from The Johns Hopkins Octopodes (pronounced "ahk-TAH-po-deez", thank you very much). This album entertains the listener with a nice, albeit brief, collection of Top 40 songs. The Octopodes demonstrate a good understanding of how to translate the average pop tune into a vocal piece with interesting backgrounds and vocal percussion. They deserve special recognition for creating a high-quality production despite recording, mixing, and mastering the tracks "in the closets and bedrooms" of the group members. Having listened to the album in my car and and on both the stereo and computer, the sound was always clear and clean.

Although the album is imperfect, I had a great time with it. Many of the studio adjustments, including some big help on the percussion, are obvious, but add to the flavor of the music. There are chords sung out of tune, the soloists often lack the power behind the words, and sometimes the music drags. Tonight and the Rest of My Life features all of these flaws at different points. Nevertheless, as a self-professed fan of pop music (no shame here), I liked the vocal interpretation of songs already in my CD collection.

Michael Vu, who arranged six of the seven songs appearing here, nicely arranged Latin choral elements throughout several tracks, giving the music a haunting and powerful feeling that contrasts beautifully with the solo. In the Delerium/Sarah MacLachlan song Silence, the background and soulful solo by Kristen Mugford play wonderfully off each other to empower a vivid sound.

In my collection of college albums that runs the gamut from bottom-of-the-pile to worn-out-from-overuse, Octopussy will feature somewhere in the top third of the genre. I look forward to The Octopodes' next release.

Listening to The JHU Octopodes' Octopussy will show you exactly why.

The Octopodes arranged, performed, recorded, mixed, and released Octopussy entirely on their own. In so doing, they serve up a delicious lesson to collegiate a cappella across the country: when in doubt go D.I.Y. Heck, when not in doubt, go D.I.Y.!

True, the percussion would have benefited from a once over by Bill Hare. The kick drums just can't match up to the sharp, hard-hitting snare. A professional mixing and mastering job would have fixed the subtle problems with levels and unmistakable silence of digital black. But overall the sonic image has clarity, depth, and detail. It actually sounds better than the majority of collegiate albums that are recorded in professional, non-a-cappella-focused, studios.

This album is organic, polished, energetic, and exciting. In so many ways, Octopussy is compelling. The Octopodes are unapologetically modern. You won't find tired, rehashed arrangements of worn out '70s and '80s cover songs here. Arrangements are busy without being scattered. A tasty mixture of percussion and active backing vocals are balanced by sustained, locked chords and an occasional soaring descant line. Studio effects provide texture and contrasting timbres without distracting from the natural sound of the human voice. The 7 songs run over 30 minutes, and not once did I find myself wishing a song was over. As if listening to the album isn't enough, you'll gain a greater appreciation for the dedication and D.I.Y. skills of The Octopodes by reading Mikey Vu's comments in the RARB Discussion Forum. Here's a snippet:

"we recorded in bathrooms, bedrooms, blanketed closets... anywhere we found quiet enough space where the room wouldn't color the sound too much, one person at a time. if you saw how we did it, you'd see how much of a ghetto hack job it really was, but in the end being able to spend literally 900 or so man hours recording, editing, mixing and perfecting at about 50 cents an hour was priceless… Sure, our disc didn't touch a real studio, nor a real engineer. Hell, it wasn't even mastered, but for half a grand, we couldn't ask for more."

The Octopodes may not ask for more. But after you hear this album, you definitely will.

Ordering information can be found on the Octopodes' web site or by writing to octopodes@jhu.edu.