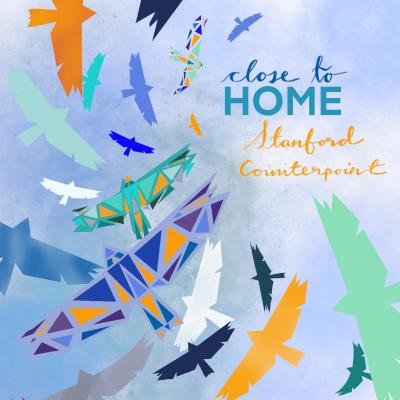 Stanford Counterpoint's album Close to Home is an enjoyable all-female recording. These singers also perform a repertoire of mostly all-female artists. The tracks are pleasant to listen to, with lovely arrangements that are mostly written by members of the group.

There aren't a lot of fancy studio tricks on this album, which is both good and bad: on the plus side, I feel as though I truly know what these singers sound like and how talented they are. But on the negative side, Close to Home doesn't have the studio gloss and pizzazz that we're used to with contemporary a cappella recordings. A lot of the album sounds very treble-heavy, and the group could've stood to bring out some of their lower notes with some studio enhancement. Home and Don't Wake Me Up feel a little thin without the richness of the low end balance.

One exception, though, is Light of a Clear Blue Morning, whose arrangement is a trio of soloists (Shelby Whinery, Hannah Prausnitz-Weinbaum, and Grace Taylor). It's treble-heavy and yet lovely; these three voices sound beautiful together, and the simplicity of this arrangement is one of the most memorable moments on all of Close to Home, giving the group a unique sound that sets them apart from other all-female groups. More of this, please!

Nothing else on the album quite hits the same high mark. With most of these songs, I really wanted to hear more dynamics, both across the song and in specific phrases. The sustained notes in the second half of Home drag, where they could've had more elasticity with some phrasing and dynamics. Similarly, I wanted Back to Black to embrace some intense crescendos and decrescendos around the choruses. Is This Love feels especially flat in its monotonous delivery.

Counterpoint redeems itself with its final song God is a Woman, which is an engaging, well-arranged performance. The group could've pushed the dynamics to even further extremes, but the soloists' delivery combined with the changes in the backs really work to make this track memorable.

Close to Home is an enjoyable album that shows this group's talent for performing and arranging; Light of a Clear Blue Morning and God is a Woman are two tracks that show Counterpoint's strengths and promise.

There's a certain spirit to Close to Home that is warm and inviting and makes it evident that the singers of Stanford Counterpoint share a genuine musical bond. You truly feel it in the more dynamic tracks on the album where the group's conviction and talent are in abundance. But while the group's heart is in the music, it doesn't always translate to a technically pleasing performance on every track.

Close to Home as a whole feels like a slow build up.

The album's earlier tracks struggle to connect with listeners, possibly because there's a substantial amount of stylistic uncertainty. The opening track Home has a graceful and calming demeanor to its sound to open but loses its footing along the way due to cluttered layering and variance in pacing. It's hard to determine which style choices are intentional and which are not.

Something and Back to Black both raise the bar by offering more cohesive vocal lines and an overall more appealing balance. Both tracks also do a better job of solidifying a musical identity, even though pacing is still a bit sedated.

While there's not much technically wrong with Don't Wake Me Up, it does little to stand out among the other tracks.

Where Close to Home sees a drastic shift comes in the presenting of Light of a Clear Blue Morning. It is in this track that listeners will notice quite a disparity when comparing the initial tracks against the later ones. Counterpoint chooses to display a lovely trio of singers who bring a mystique and beauty to the track that's surreal and captivating. The ladies are adept at executing uncommon harmonies and a silky blend that brilliantly culminates into this spiritual, folky lullaby. It's as if you are listening to a young version of The Dixie Chicks!

The final two tracks are where the group really settles into its sound and fires off on all cylinders. One of the major contributors of this accomplishment comes in the decision to take full advantage of the octavized bass. While present in earlier songs, its utilization in the second half of the album has an undeniable impact.

Is This Love delivers immense soul over a well-balanced arrangement, where every part effortlessly gels with one another. It is arguably the most complete track on the project.

As for God is a Woman, it simply feels as if every other track leads up to this one. Take all of the best parts from the other tracks and you get this one. The group's sound is extraordinarily passionate, there's a well-articulated groove, and most importantly, Counterpoint just sounds so confident in its singing. These women sing with a fearlessness that lets the final track leave a massive statement on who they are!

Although Close to Home offers a mixed assortment of art, its final movement gets the job done. The old adage of saving the best for last rings true for what Stanford Counterpoint has delivered on its latest project.

Close to Home is the latest from Stanford's Counterpoint, an all-female group on campus. As an album, it has a number of things in its favor. For one thing, it's not very long; Counterpoint has chosen seven songs. This allows the musicians to showcase some variety in song choice, arranging style, and soloists. It doesn't, however, fall into the perennial format of college group albums of a dozen (or more!) songs which struggle to distinguish themselves from each other by the end.

It's also well-mixed and mastered. Occasionally I wonder if albums from all-female groups fall slightly short because the production work tries to overcompensate for the "missing low end" in ways that don't always serve it well. Bri Holland, who mixed all but one song on the album, is certainly no stranger to working with female groups, and the choices made — specifically on that low end front — feel matched to what each song actually needs. I also want to highlight Elena Georgieva, who not only arranged a number of the tracks, but also did the mixing for Light of a Clear Blue Morning, a standout of the album.

Counterpoint also has excellent cohesion as a group and blends together beautifully. This helps bring a number of songs up in my estimation. In Back to Black, for example, while the arrangement itself isn't anything unexpected, the later section has background unison chords that hit and lock really tightly. Similarly, Don't Wake Me Up highlights how well these singers work as a unit, dancing around each other in little interwoven or echoing phrases. Another strong track on the album, God is a Woman, also features a sweet, crunchy slide into a resolution that just gels perfectly.

I think the group made some good choices in not overextending itself, and perhaps that slightly narrowed focus helped in being able to lock in these songs. It's not an album that's trying to blow anyone out of the water with off-the-wall, surprising new takes on anything. But if you just want a simple collection of polished, tightly-sung numbers, then I would definitely check out Close to Home.

Close to Home streams on Spotify.