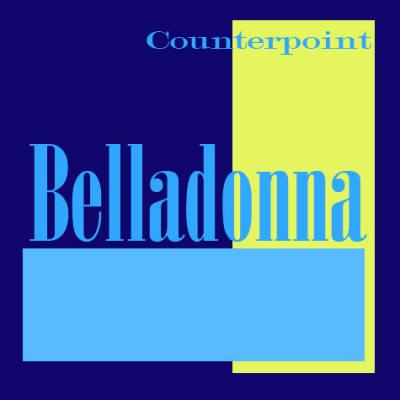 In the "old" days (read: just a few short years ago), all-female collegiate groups that played around with octave pedals and sampled VP to fill out their sound on the low end were few and far between. Those that did received a quite a bit of attention and their fair share of awards due in no small part to a sound that was simply that much richer and fuller than the competition.

What was once a novelty is now de rigeur; all-female groups must do more than add fancy shmancy processing to get my attention. As you may have already guessed, Stanford Counterpoint, the university's second-oldest a cappella group (after the Mendicants) and its oldest all-female group, didn't quite succeed in that department with their latest album, Belladonna.

Don't get me wrong: Belladonna is a pretty good album — especially if you're a fan of the somewhat esoteric repertoire, which includes Mika, Nate James, Ingrid Michaelson, The Bravery, O.A.R., One Republic and Lustra, peppered with a bit of more mainstream fare like The Beatles and The Pussycat Dolls. What you'll get is a reasonably faithful arrangement of the source material, with a thundering, octavized bass and slickly sampled percussion anchoring a relatively uncomplicated background block that rarely varies from the arrangement of the initial verse-chorus. So you get the song you like performed serviceably and pretty much the way you might expect to hear it. That doesn't make for terribly interesting a cappella in my book, however.

As alluded to above, the arrangements are the album's biggest shortcoming — they're just not all that exciting at all. Block chords and/or plodding rhythms prevail and what's worse, what you hear in the fist minute is pretty much what you can expect to hear for the next 3-4 minutes of the song. Almost without exception, there isn't a single arrangement that truly builds or varies dramatically in any meaningful way. Bridges, be they instrumental or lyrical, never kick the song into another gear or raise the listener's pulse even a blip, and final choruses just kinda sit there — bland re-statements of the same chorus you've heard multiple times before.

My issue with arrangements is nothing new and, to be fair, there are times when the soloist can bail out what might otherwise be a less engaging listen. But here — with the possible exception of Bear Douglas on her back-to-back Si Te Vas and Adia — Counterpoint let me down as well. The group opted for medium up-tempo, sultry/smooth alto solo after alto solo that quite frankly left me bored after a while. Sure Yao Yang does a really nice job with Kingdom Falls, but when it's followed by The Way I Am and Believe, I almost felt like I was hearing the same overall "sound" again and again. Individually, none of the tracks are weak — with the possible exception of an ill-conceived, ill-chord-substituted, Casio drum-machined Beatles medley that had me rolling my eyes — but in succession, they join forces to become a bit of a snoozer.

The ladies of Counterpoint are undoubtedly gifted singers, and from their inclusion on several BOCA compilations, we know they can produce great work. This album is merely okay work. I imagine their fans will like it, but I don't know if it will gain them any new ones.

Just over a decade ago, I entered the world of collegiate a cappella as a freshman at USC and a founding member of the Sirens. Back in those days, there were several complaints about recorded female a cappella. There was a lack of bass that made most of the songs sound thin, compounded by the wussiest vocal percussion imaginable.

Women's groups were most successful on mellow songs with minimal percussion, where beautiful blend, complex arrangements, and an engaging soloist could captivate. But putting out an a cappella Sarah McLaughlin album isn't so effective or listenable.

Fast forward to today. The magic of Pro Tools pumped up the bass, and ladies are unafraid to spit out percussion with the guys. Enter Stanford Counterpoint and their latest album, Belladonna.

They kick it off with Buttons by the Pussycat Dolls. This lively number had me bouncing around the house singing: "Loosen up my buttons, uh huh". This song's appeal for me only increased when it stopped my baby from crying when we were waiting at a long stoplight. I think she liked the rhythmic bass vibrations.

They follow it with a catchy song originally by Mika, but the range required in the soloist meant that the verses were a bit too low for her — she almost talks through them, but the choruses were right on.

Of the remaining tracks, only two of them are upbeat. The rest are slow- to mid-tempo — standard picks for female groups. But like female a cappella a decade ago, Counterpoint is most successful with these kinds of songs. With so many mellow songs in a row, the album starts to drag a little. Each song by itself is interesting, but it is hard to maintain that interest for an entire album of such songs.

If none of their soloists knock my socks off, I find them all to be appealing. Scotty Doesn't Know sounds a little forced, and the Let it Be/Hey Jude medley could have had a better transition from one song to another and the separate tunes could have been better arranged. It was overly simple.

On the whole, however, I enjoyed this album and found their song choices to be much better than many other college albums I've heard. Put these tracks in your iPod and make a "mixed tape" with some more upbeats songs and you'll have yourself a good listen.

Let me step you through my reactions during my last listen of Belladonna. (Spoiler alert: the album is good, but unspectacular mainly due to uninteresting arrangements.)

The album opens with Buttons, a song that Counterpoint has modified to introduce their group, the "13 honeys straight from Stanford University". It's a nice intro track.

We move on to Grace Kelly. Frankly, I was disappointed; I had high hopes because it was my very favorite number at a recent concert I attended. Counterpoint's version falls a little flat. Soloist Ericka Sohlberg was okay, but not special, and this song is really all about the solo. The song ends. Someone says "ka-ching". Why?

The next four songs all seem kind of the same. Good tuning, good mix. Soloists were all very good, none were great. Background vocals were all sung well. Arrangements were all kind of boring. When I looked through the liner notes I realized here that Counterpoint did all of their own arranging. That's admirable; however, the arrangements really seemed the "weakest link" of the album. My opinion: singing and songwriting are two different talents, and these ladies possessed more of the former than the latter.

Kudos to them for tackling the Beatles. The sandwich of Let It Be, Hey Jude, then Let it Be reprise works well. I give Ashley Hogan credit for a nice arrangement, one of the best on the album. The tempo change in Hey Jude after the first line is kind of abrupt. The more gradual tempo change when going back to Let It Be was less jarring. Overall, the song left me wanting more — one of the few songs on the album that did that. Stephanie Cao had a really nice voice, both in this song and in the high harmony part in The Stranger. I wish she had done more solos on the album.

Amsterdam comes on. My 8-year old daughter starts singing along. So do I.

Next up is Say (All I Need), the best track on the album. They finally put all the pieces together: a great solo by Anne Levitsky, a good tune to work with, and a good arrangement by Yao Yang. Interesting things go on in the background, subtly changing during the whole song. Like Let it Be/Hey Jude, this one left me wanting more.

Si Te Vas comes on and doesn't do anything for me.

It takes guts to solo on a Sarah McLachlan song, Adia. Bear Douglas does a fine job on the solo, but the arrangement (also by Bear) is nothing special. I've gotten used to that by now.

Scotty Doesn't Know! At last some emotion! The song is fun, but kind of loud and repetitious.

The album finishes and I'm left trying to analyze it. What do I conclude? The songs are nice but not spectacular. It's a pleasant listen, but one that you start playing and then forget about it until it's over — not one that grabs your attention and makes you replay tracks. The soloists are pretty good. In fact, all the singers are pretty good. They could probably have used more passion/emotion. They certainly could have used more interesting arrangements. I'm mainly left hoping their next album takes them to the next level (pardon the cliché) because the potential is certainly there.