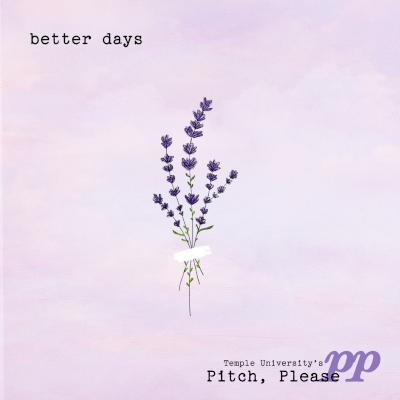 The unfortunate continuation of puns in a cappella does not obscure the mega-talent apparent in the mixed group Pitch, Please from Temple University. Even though the group has only been around for seven years, it can easily make the claim as one of the most formidable queer advocacy groups on the scene today. The musicianship pairs blessingly with the messaging on the group's debut release, Better Days. This is a recording that you'll want to own and play sequentially instead of skipping around like a collection of singles so that you get the whole artistic experience.

The album starts off with a pretty but also pretty useless (or not needed) intro. There Will Be Better Days is simply that, a sort of circular statement of affirmation — kind of a mantra that doesn't really lead well into the next track which is a gritty rendition of Janelle Monae's Americans. This song makes a statement on its own (figuratively and literally) and that would have sufficed. Granted the track does reference the aforementioned titular line in the spoken word section, but the song is just as powerful without it.

Other than that, the album is stellar in production and performance with sublime blend and engaging soloists.

As an advocacy group, solo assignment can signify that who is singing is as important as how they are singing. In the three previous decades (wow, WOW) "gender-flipped" solos more than likely would swap pronouns of the love interest. Collegiately, it was Greg Binstock on the Bub's Bills, Bills, Bills from their '01 album Next that was one of the first times I noticed the pronouns didn't change. Here, gender expression brings as much weight as possible to these tracks. Representation matters.

A messaging pair is The Village and Green Light, as they complement and complete a storyline if you know either of the videos. Tommy Yoe's pensive wail on The Village delves easily into the brusqueness of the latter. After I understood the connection I couldn't stop fawning and being fascinated by the combination of the two.

Two standout performances are Wesley Rosenberger and Maggie Kozak. These two tenors are top-notch. Rosenberger's Blind Faith is a masterclass in subtle manipulation of an audience's emotion. He floats on top of the sound and moves through the lyrics in a way that I can best describe as decadent. But it is Kozak's brilliant straight tone singing that barely contains the raging power beneath the surface. It's a vocal timbre that is not for everyone, but if you dig it, you dig it and my shovel is full. Green Light is played on repeat. I still tear up thinking about it and listening to it.

My favorite song on the album may be the first half of the closer Light of a Clear Blue Morning that has just enough Dolly in it that I'm smitten, and even though it is in the style of the Wailin' Jennys, it really sounds more like something Trio (Dolly, Linda Rondstandt and Emmy Lou Harris) — one of my all-time favorite groups — would release and I'm living.

Josh Carter is the sole arranger on the album which is a good thing as there is evidence of really knowing the strengths of the group and utilizing the singer's capabilities to an advantage. Though I would have liked to hear others' attempts because that could have diversified the sound even more.

All in all, Better Days is hella great for an album, and especially as a debut release. I do hope that it doesn't take seven years for Pitch, Please to release another album. The world would be a lot less brighter.

The musical acumen of Pitch, Please from Temple University is plentiful in the group's latest album, Better Days. While the bookends are a great deal more refined than the middle of the album, the ingenuity and wit the group possesses is on display throughout.

The way that Pitch, Please comes out like a house on fire in the first two tracks is a perfect example of how to hook a casual listener in the digital streaming age for longer than a few seconds. Additionally, the transition between the first track and the intro to Americans is seamless and perfectly continues the journey and energy captured in the first verse. The newly-composed material to introduce Under Pressure is exactly the kind of ownership that cover groups need to stand out from the source material in new, meaningful ways. The return of the There Will Be Better Days (Intro) theme in the finale, Light of a Clear Blue Morning / Tomorrow, is a simple, yet masterful way to homogenize the full album-listening experience and that use of musical motive goes a long way with a casual listener, the heady academian, and everyone in between.

That said, there is an unevenness to the core of the album and in many of the songs that employ these sharp tricks. For example, while Americans begins powerfully, there are moments of space that feel distinctly empty in between background puncutations, and the inflection and tone of the soloist doesn't always align with the lyrical message. While the barbershop-inspired chromatic lines in the Under Pressure intro are slick from an arranging standpoint, they're some of the least interesting dynamically. The ballads that make up the center of the album, The Village and Green Light, both take too long to arrive at their uptempo destinations and do so without much buildup from the background.

The group need not look far for improvements; in fact, they do many of these things in other areas. For example, the drop in the finale track, Light of a Clear Blue Morning / Tomorrow, is perfectly directed to its peak by the "there will be better days" background entrance. In addition to the first two tracks, the seamless transition between The Village and Green Light makes the latter track that much more appealing and the album as a whole more continuous. The background vocals, while beautiful and even downright glorious in some spots, are often treble-heavy in songs like Americans, Under Pressure, and Past Lives, and the group could benefit from grittier vowels or some of the filters present in the opening and closing numbers.

The mastermind that is Josh Carter, who arranged all of the songs on the album and produced it, clearly has a handle on excellent techniques and musical skill. For a debut album, Better Days is a very strong offering, and for the queer advocacy group that Pitch, Please is, the group should be proud of its purposeful, intentional messaging in assembling an album. I look forward to following the group's journey.

One of the many benefits of listening and critiquing albums for RARB (other than the obvious — listening to the amazing music) is seeing the direction and trends that are sprouting up in the a cappella world. Over the years, we have seen many groups across the country with cultural focuses — South Asian a cappella groups like UPenn's Penn Masala or Jewish a cappella groups like Maryland's Kol Sasson. But, in recent years, I'm seeing more groups with different focuses, such as the service/civic engagement focus that Binghamton's Note to Self prides itself on. Enter Temple's Pitch, Please.

Up until this album, I don't think that I've listened to an a cappella group that had a specific focus on queer advocacy. As a member of the queer community myself, I absolutely love this concept as another way to bring our constant fight to the forefront. Pitch, Please has put together a fantastic collection of tracks on Better Days by some phenomenal queer artists, mixing both high energy and powerful messaging throughout the album. Janelle Monáe's Americans is a great opener following the brief intro of There Will Be Better Days — the opening few bars is just a wall of sound that's beautifully blended, and both Sydney Fowlkes and Macey Saphore are awesome on the solo lines. As the track goes on, you can't help but want to get up and dance and also join the call to action.

The head-turner is without question Blind Faith. Josh Carter, who arranged all of the songs on the album, has done a great job in giving Wesley Rosenberger his own moments throughout the song to really come out and shine. From the start, Rosenberger's baritone vocal just seems to float across the track, and he shows some wonderful control with rifts throughout the song, particularly in the second verse and at the end of the final chorus. The thing that really stands out to me about this track, though, is the background vocals. Carter did a brilliant job ensuring that the group really paid attention to dynamics, adding nice little swells and falls to give the arrangement more color and emotion all while gradually building from the piano intro to a forte climax in the final chorus. Absolute perfection from start to finish. And speaking of emotion ... Tommy Yoe's solo on The Village. It's no question that this song resonates with a lot of us in the community, and Yoe delivers a powerful performance while showing off some incredible range in the choruses.

Carter did an incredible job arranging the album, but I do question the lack of the famous bassline in Under Pressure. I am all for taking arrangements and changing them up, but something as recognizable as that bassline probably shouldn't be messed with. Not to hear any variation of it until right at the very end leaves me a little unsatisfied. And while we've talked about the emotional connection that Pitch, Please was able to convey in previous tracks, Past Lives doesn't hit with that same connectivity.

That all being said, Pitch, Please has done incredibly well with its first full-length album. The musicality of the group and how they've seemed to cut out a little niche for the singers makes me very excited to follow them for years to come.

Better Days streams on these platforms.