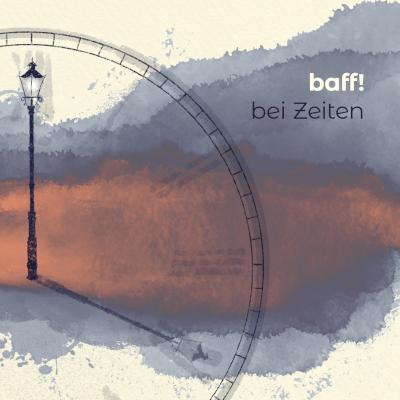 bei Zeiten has some of the best pure singing I've heard on a record in a while. The four singers of baff! have brought their A-game to this new recording of mostly self-composed songs. It's also refreshing to hear a quartet that sounds like a quartet. There's some overdubbing, some added percussion lines, a few guest voices here and there. But mostly we have great voices making lovely music together.

As before, I prefer the upper-voice soloists to the lower-voice ones, although this time around the group blend seems excellently balanced and the bass lines have a notably pleasant timbre. The soprano-heavy songs bring me the most joy, such as the jazzy showcase of Herbstmorgen or the breezy groove of my favorite track Marie. The overall vibe is somewhere between soft rock and lounge music. Heute Nacht reminds me of the Pussycat Dolls, while Standby has a generic '80s vibe that falls somewhere between Heart and Glenn Frey, before breaking into rap toward the end. As a white American, I find rapping Germans to be inherently entertaining; your mileage may vary. In any case, the following track is a spare and moving cover of Aloe Blacc and Avicii's Wake me up. The song is transformed here from journey song to jazz ballad. I love it.

How much you like bei Zeiten overall will depend on how much you connect to the individual tracks. For me the album was a slow starter – the opening track is well-performed but didn't grab me, and its successor Palaver, palaver is boppy, catchy, though ultimately not very filling. The best tracks are in the middle, and then we start to get spacey. The saxophonish Sind wir bald da? is maybe not a song for listening to every day, even though it has a lot going for it. I really like the pared-down intro to Sekunden zähln. I also lost interest in the middle, then snapped back into focus for the big choral finish. As a complete track, I'm not sure what to make of it.

Zeitlos ends the release on a strong note, with good singing underpinned by a simple snapped groove. The lyrics ask you to "Come on, let yourself be moved by it!". This album is definitely worth a spin.

Baff!'s bei Zeiten ("At Times") is the crowning achievement of a jazz/pop powerhouse with quite a few achievements under its belt already.

This group has swept First, Second or Audience Favorite in practically every jazz and pop event imaginable: Scala Vokal Ludwigsburg, A Cappella Festival Konstanz, So La La A-cappella-Festival Solingen, vokal.total Graz, Vocal Champs Contest Sendenhorst, and a-cappella-award Ulm. And baff!'s recorded work hasn't gone unnoticed, either: CARA awards for Best Folk / World Song in 2018; and nominations (that this reviewer predicts will turn into awards) for Best Pop and European Album in 2021 for bei Zeiten. All this is to say that baff! is the real deal, the all-too-rare talent in today's autotuned, computer-tweaked studio world that can actually do it all. These musicians produce recorded excellence, but they have the chops to wow the crowds and the judges as well — and some quintessential element of live talent and true group connection survives and thrives in their recordings. This is a true ensemble, not merely a collective.

What's more, this group of street seasoned, but still youthful singers is as original as it gets. A stunning eleven of bei Zeiten's twelve tracks are penned by group members, with the group's one cover, Wake me up, showing such a bold reimagining that the original will be your second favorite version after but a single listen. Jazz and pop fans, especially those who delight in German, have a new crush in baff!.

Baff! walks a fine line between the oft incompatible realms of jazz and pop, embracing and intertwining elements of both to surprising success. Rather than creating a muddy brown from mixing too many colors, the group carefully blends the best of both worlds. The rich chordal and textural expression are colors from the jazz world that form an ever-present back drop of emotionally moving musicality, while the intensity, modern stylings, and production add the bolder colors of the pop world that ground the sound in honesty and relevency.

Standout tracks, which somehow include about half the album, are the opening track Zeit, the majestic stadium-filler Sekunden zähln, the instant jazz classic Herbstmorgen with soaring soprano work (in 7, no less), the ethereal, transformative Im Sand; the intimate, vulnerable Heute Nacht; and the incredibly creative, emotional retelling of Wake me up. Any track not mentioned is still a winner, just not quite as impression-forming as these.

Even if you don't speak German, bei Zeiten is well worth your time. This is an album that makes fans out of the curious and crosses the cultural divide of language. Treat yourself to that joyous transformation.

bei Zeiten (At Times) is my second experience with baff!, the first being a review of the group's 2017 album, Weiter atmen (Keep Breathing). After I listened to bei Zeiten several times it was interesting to go back and re-read my 2017 review to see how some things have changed and how others have stayed the same.

The same: baff! is still a four-member group. The song writing is still essentially all composed by group member Jonathan Mummert. The album is once again nearly all originals, with Wake me up by Avicii being the exception; and yet also being so far from the original that it almost might as well be considered a new song. The arrangements still seem a little empty at times with so few singers in the group. The lead line is still frequently passed around between group members, and while all singers are very good, the alto and soprano soloists stand out in particular (Lilly Ketelsen, alto; Florentine Faber, soprano).

Some changes: the group has improved the production dramatically. Recordings are clean, voices are well balanced, and the tracks are now rich and full. Moreover, the group seems to have really found its style and there is a unity to the album that I don't recall from Weiter atmen.

That being said, for the most part this style doesn't grab me. I would describe this ensemble as a contemporary jazz quartet, with occasional departures such as Standby (which is more rock and a rap towards the end), and Sekunden zähln (Counting Seconds) which is more pop. To continue on about Sekunden zähln for another sentence or two since it was my favorite song on the album, it's got a very catchy melody and even features a background choir of about 75 singers who are all credited in the liner notes. It also has some of my favorite lyrics. baff! did the reviewers a favor and provided English translations; here is a verse from Sekunden zähln:

Let's count seconds, the entire day.
Let's count laps for hours just because I say so.
Let's think together that we weren't here.
Today we'll waste time and mine will go to you!

The idiom for "waste time" translates literally as "give away time", and I really like the imagery of "wasting time" together being a gift from one to another.

On the other hand, a lot of the other lyrics don't really grab me, such as these from Das Mädchen von nebenan (The Girl Next Door):

Or these from Zeitlos (Timeless):

Being tired of trying to be someone else, as if you weren't free.
Taking a break, just shutting down, finally on stand-by.
Helplessly waiting for the day when you will succeed to fly.
Overwhelmed with aspirations, seeing what the day will yield.

Or these from Im Sand (In the Sand):

I fly to Utopia, I swim to Atlantis...
But if I knew how far I can fly, I wouldn't have to stand here
waiting for the water to come, to see what the future brings.

Just not quite my cup of tea — a little too stereotypically in the “hopelessly and helplessly longing” genre.

However, if a jazzy album full of longing lyrics in German, along with a 50% tempo version of Wake me up (in English) sounds intriguing, then this is a great album for you. As for me, I appreciate what the group is doing, but probably won't be listening to most of this album very much in the future.

bei Zeiten streams on these platforms.