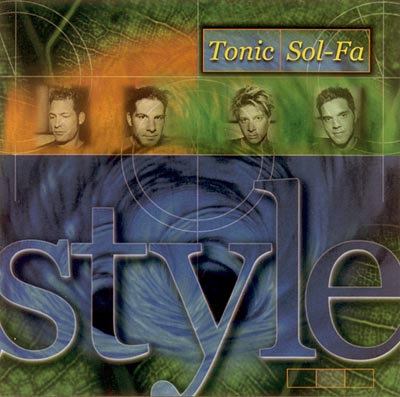 Tonic Sol-Fa's Style is a bright, tight, and clean-sounding album reminiscent of many of The Blenders' recordings (that might be because it was mixed by Darren Rust of The Blenders). It's a pretty short album (only 30 minutes, with 11 tracks) and features six cover tunes and five originals.

The covers are very well done, and are not your standard a cappella arrangements of these songs (thank goodness). The original songs are not too bad, but are nothing amazing. They sound like originals that an a cappella group would write: one song with some sort of Na-Na-Na chorus, one doo-wop song, one Route 66-like song, and then there's the last song, Oklahoma Wind. This last tune stands out from the rest. It's good and actually sounds like they wrote the melody first with a guitar and then wrote an arrangement of that song. Unfortunately, it's pretty short, like this album, and ends rather abruptly.

The production quality of this recording is top-notch. As I mentioned earlier, it's super-clean and bright. I didn't notice any mixing or production problems. It's a decent album, nothing incredible. There's nothing going on here that hasn't been done by other four-person a cappella groups for the past five years or so (except maybe the brief use of the "auto-tune effect" on Love You Forever). It's very upbeat, very well sung, just not very exciting.

In the words of my grandfather, oy, have I got a problem.

You see, I know Tonic Sol-Fa is a talented, energetic group of guys who can make terrific music together. No, I've never personally seen them live, but I have friends who own their albums and vouch for their ability. I even have a business associate who saw them perform at a corporate event and greatly enjoyed the experience. What's more, on their latest release, Style, they sound, well, pretty terrific.

So you should run out and buy the album, right? Wrong.

As noted above, read this knowing that this is my first exposure to Tonic Sol-Fa and that my generalizations are based solely on my impressions from Style and not from a thorough knowledge of their discography. I give this caveat because I suspect that what I'm about to say will prove most unpopular with the group's fans, and frankly, might even seem a bit harsh to the casual a cappella listener.

In listening to Style, I was continually struck by the thought that four gifted singers, at least one of whom can render solid vocal percussion and another who offers a resonant bass, plus a crafty, knowledgeable engineer, does not a top-notch a cappella group make. Tonic Sol-Fa has all of these characteristics — pitch perfect singing (possibly aided technologically but I'll give them the benefit of the doubt), multi-layered percussion, an extremely vocally agile bass — and yet, Style still left me severely underwhelmed.

Onward to a mildly inventive, though still wow-lacking cover of Eleanor Rigby and then to another original called The Road. Here again, a chorus of "When the road is long/And you can't go on [which doesn't quite rhyme, which bothered me]/You can depend on me/I know in my heart/You'll come back to the start/You can depend on me" had me searching for the liner notes to see how long it was until the next song.

The next three songs are covers, and as such, I cannot take issue with their composition. In fact, of all of the songs on the album, these three were among the most enjoyable. Man of Constant Sorrow had me yawning a bit by the end, but Witchy Woman was an intriguing take on a song I don't much care for, and the Scooby Doo theme made me smile (even if I was cynically wondering if the group was simply searching for its own Carmen Sandiego-like TV tune).

And so on, and so on. Overall, the originals left me unfulfilled and the covers were capably rendered , occasionally interesting, if rarely inspiring. Yes, I do have nagging questions about the group's abilities to perform live, given the seemingly extensive use of overdubbing (for VP in particular) and studio effects. But that's typical of many of the newer groups emerging these days. And frankly, my main issues here are more fundamental and have nothing to do with the guys' abilities as singers or stage performers — they sing damn well and I'm sure they put on a fun show.

Ironically, it's the very title of their album that fails to come across. The CD lacks style, and by extension, pizzazz, flair, and panache. The arrangements are good, but not great. The singing is polished, if not virtuosic. The vocal percussion is solid and steady but never truly impresses. A football analyst might call what's missing an "intangible" — that extra-special something that would elevate this album from another first-rate but workmanlike effort to a must-buy repeat listen that lives in my CD changer for more than the only 30 minutes it takes to listen to this entire album. To paraphrase Spike Lee, it doesn't have it.

It really gives me great concern as a reviewer when I am forced to give an album a perfect score. Thank goodness I found one track that I didn't love quite as much as I loved the other ten.

Seriously now, I thought that this was a truly outstanding album. Great voices, terrific blend, fantastic arrangements, catchy originals...hmmm, I'm gushing, this is not good.

Style has a lot of well-used studio effects, and I have a sneaking suspicion that there are more than four voices singing in a lot of areas; I heard doubling up of voices, layered tracks, counterpoint, etc. I found myself wondering if these guys could possibly be as good live. Then I thought, "Who cares?". The disc is great, and I'm not likely to catch them live anyway, unless they plan to tour Australia in the near future!

I can't really say that I have a favorite track — I enjoyed the whole album. I always admire groups that can produce original work, but usually find songs I'm familiar with more enjoyable. Not so in this case; the five original songs on this album are all catchy, balanced, well-written numbers, a couple of which I could easily envisage in the domestic pop charts. I particularly enjoyed Ready-Made, a groovy number with a smooooooooth bass solo.

I groaned when I read Eleanor Rigby in the track listing. Let's face it, The Beatles are absolutely done to death in the a cappella world. However, Tonic Sol-Fa's version maintains the integrity of the original song, but adds in a really cool bridge that brings the song into the 21st century.

There was essentially nothing wrong with Land of 1000 Dances. It was just a little more repetitive than the other tracks, and didn't warm me up as much.

Perhaps the ultimate accolade is that I really dislike the original version of Witchy Woman. In fact, I hate it with a passion. But I still gave Tonic Sol-Fa a 5 for it, and I haven't been pressing "next" when it comes on, either.