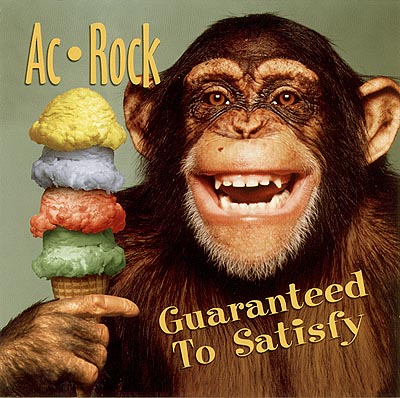 These guys should be movie stars, and I say that with complete and utter seriousness.

Hollywood will always, always have a need for nice-looking young men who can be The Band at movieland's bar mitzvahs, weddings, corporate Christmas parties and other miscellaneous galas. Ac-Rock is straight out of Central Casting. With their cheerful cover tunes, wholesome sound, and general air of upbeat professionalism, they're perfect for the job.

And if you ever have a need for that sort of Americana, they are perfect for you. In this age of flags, ribbons and anthrax, there might be more call for that sort of thing than we black-clad artistes would normally think. Ac-Rock is fun and entertaining and only a stone's throw from the absolute middle of the road. They have the same repertoire as the oldies station you hear in the grocery store, dentist's waiting room, and state fair pavilion. Chuck Berry, The Beatles, Steve Miller, The Eagles, The Cars. (The Cars, oldies? I'm afraid so. The '80s are now two decades past and fair game for the nostalgia kingpins. Sorry.)

Ac-Rock's main distinguishing feature is that they don't use any instruments, which is routine in our corner of the world and their gimmick in the rest of it. Every cover band needs something for people to remember them by — why not be talented singers who are good enough not to need any instruments? Works for me.

Hollywood likes gimmicks too. If you know any casting agents, you know where to send them.

Once upon a time, men used to gather together to sing in groups of four. It seems quaint now, doesn't it? Well, Ac-Rock is still at it. And they've got matching outfits to prove it.

Not that there's anything wrong with a cappella quartets. Ac-Rock proves, on occasion, that there's a lot to be said for the simpler sounds. And just because you don't have a fifth guy doesn't mean that you can't have some vocal percussion. In fact, the best thing about Ac-Rock's new CD, Guaranteed to Satisfy, is the VP. You could accuse it of being crude and simplistic — you can really hear the guy saying the "digga-du"s on songs like You Might Think — but I'd argue that it's clear, bold, and confident.

However, the album as a whole fails to deliver on the promise of its title. The album's first problem, which starts right on the opening song, is that the songs often feel like they're being sung under tempo. It's not exactly sluggish (they've still got some energy), but it's definitely too deliberate and slow. The songs aren't peppy, and when an album features Rockin' Robin, the songs had better be peppy.

The second biggest failing is the way the group sometimes chooses to sing the guitar and keyboard lines. Far too often, they opt for a nasal whine. In the case of You Might Think (by The Cars), they shoot for a rough distorted sound. It ends up sounding like they invited Beavis (of Beavis and Butthead) to sing with the group.

Finally, there's the problem of the song intros. They all hurt the effectiveness of the song they're supposed to set up. The What's Your Name Rap is at odds with the classic song it's supposed to introduce. There is a sort of segue between them, but they don't make sense together. I'm corny enough to think it's cute to put Rockin' Robin and Stray Cat Strut next to each other on an album and put a filler called CatBird Link between them. It's a cute joke. But in terms of pacing, CatBird Link only serves to distract you from Stray Cat Strut. Again, the cuts don't match up musically, and the intro has a quirky energy that the song itself lacks. Finally, there's Studio Daze. A more apt title would have been "We were trying to sing Runaway and we messed up and laughed and thought it would be charming to show you what it sounded like.". This intro has the smoothest segue to the actual song, but that only serves to make you think that they're still messing up when the real song starts. (The goofy arrangement does nothing to dissuade you from this notion.)

As if the three intro tracks weren't bad enough on their own, together they really mess things up: Ac-Rock put the intros on separate tracks (which is a smart idea), but they don't list them on the back cover (which is a very bad idea). You Won't See Me is the fourth song on the back cover, but it's really track number 5. Abracadabra is the eleventh song on back cover, but it's really track number 13. Ice Cream Man looks like it should be track 14, but it's really number 17. This makes it a pain to quickly jump to a song you want to hear. The tracks are properly numbered inside the booklet and on the CD itself, but the back cover is where the info ought to be.

There are a few good cuts on the disc, but if you think Ac-Rock deserves a space on your shelf, I'd recommend their earlier albums over this one.

If you enjoy the original versions of the songs listed on Ac-Rock's CD Guaranteed to Satisfy, you will enjoy Ac-Rock's covers. If you don't like what's listed, then don't buy it. If you are in the middle, you will still probably enjoy what they have done. I found myself listening to this CD even when I was not collecting information for this review. It's fun.

I enjoyed the way Ac-Rock tried to remain true to each song's original artist and arrangement. They come amazingly close to what I remember of the Beatles' Drive My Car. The song very favorably emulates the Fab Four and their instruments.

If you remember what Ocean Drive, S.C. was like in the '50s and '60s, you will understand how Ac-Rock could have shut down the jukeboxes at the Pad or Galleon and sung It's Alright or What's Your Name. The shaggers wouldn't have missed a beat dancing, Weejuns shuffling on the sandy dance floors.

If you want to hear music from THE classic rocker, listen to their energetic presentation of Chuck Berry's No Particular Place to Go. Not even Star Trek's transporter could move you back to the '50s any faster.

The only song that really did not appeal to me was the last one, Ice Cream Man. It's not sung badly, but it just did not do anything for me. I expect it's a hit with the K-8 crowd.

Some will argue that Ac-Rock used too much reverb in their production. Yes, I thought so too, but it also seemed to work as a fill-in for some of the dead space left by the types of music and the arrangements. If there are only four performers singing a cappella rock and roll, the group will need the reverb.

What I probably enjoyed the most about this compilation is that it is apparent that Ac-Rock has sung together a lot. Their web page states that they have sung for over 200 K-12 schools in the past six years. The list of corporate clients is over 90 strong. They have packages for stage and dinner shows, trade and industrial shows, or whatever you wish at conventions. "Been there, Sung For Them" should be this group's motto.

Finally, how do you pronounce the group's name? Just like it sounds if you know that it is derived from "A Cappella" and "Rock".

Available through Mainely Acappella, Primarily Acappella or the Ac-Rock website.