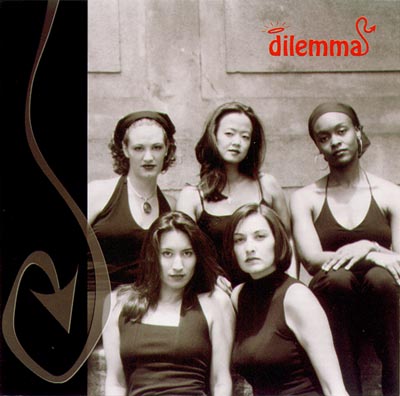 Solid arrangements and pure willpower lead this project into the a cappella community. It's obvious that the members of Dilemma believe in themselves, and with the release of their self-titled album Dilemma, they should be very proud of what they've accomplished.

This project features both covers and originals that come together to form a cohesive effort that many groups would be proud to present. A nice mixture of songs ranging from Alanis Morisette to Lauryn Hill to Pat Benatar to Sting and even the Temptations are spread across this album. The diversity of original artists that they chose to cover didn't lead me to believe that they could create a consistent sounding project across the board. I was wrong. They chose songs that allowed them to keep the album's flow consistent throughout, leaving their main style and sound almost unchanged between tracks. Kudos!

Where they struggled the most is vocal maturity. On a lot of the tracks, I felt that you could replace these singers with five good female college voices and create the same sound. Not one of the soloists on this album stood out to me as a having a true mature soloist voice. The closest soloist to achieving this sound was Rahela Abbas, but even she fell just a little short of what I would like to hear. No worries, though; this is nothing that a little time won't fix.

Overall, a very solid effort from an obviously new and upcoming a cappella group. I would like to see their next project be more independent than this one was. This album featured the work of Andrew Chaikin on vocal percussion on a couple of tracks, as well as an arrangement by Deke Sharon. Nothing wrong with using some help on your first album or two, but this group is ready to open up its wings and fly on its own.

RARB alumnus Gabriel Mann can do it all when it comes to a cappella, but he might want to consider a subspecialty producing female groups. He has helped Dilemma and The USC Sirens produce two of the best treble recordings I've heard. The man can do more with an octave pedal than most producers can with a real bass.

Dilemma's greatest internal strength on this debut CD is saucy solo work by Denise Shepherd and Christine Chang. Shepherd shines on her soulful original Wishing, although a rather boring arrangement mars Chang's tasty turn on It Hurt So Bad.

I was disappointed to see that three out of the four best tracks on Dilemma rely on the assistance of (male) outsiders. Deke Sharon's arrangement of We'll Be Together makes the most of five voices, while guest VP Andrew Chaikin drives the rocking Can't Get Next to You and Don't Leave Me This Way. That said, they are terrific tracks, and I can't argue with any process that creates results like this.

Ironically, it's the skippable tracks on this disc that raise my hopes for Dilemma. The dull and ill-tuned I'm Beginning to See the Light and The Sweetest Thing (Tell Him) were recorded by a previous incarnation of the group two years earlier than the rest of the CD. If Dilemma improves as much in the next two years as they did between 1999 and 2001, they're headed for a stellar future.

The self-titled debut CD from San Francisco's female quintet Dilemma leaves me a bit cold. The fundamentals are solid, but it feels like they're still getting their feet wet, instead of taking the plunge.

Their sound is sleek and slinky, with touches of blues, soul, dance, and jazz. Their individual tones vary from deep and gravelly (in a good way), to classical and light, to nasal and pop-y. Most of the time they make this work, although there are times when the change in timbre is quite distracting.

Their solo work is pretty good. Denise Shepherd and Christine Chang, specifically, turn in great work. Shepherd's lead on her original Wishing (one of two great originals on the disc) and Chang's turn on Susan Tedeschi's It Hurt So Bad are highlights of the disc. The former is soulful, strong, and sexy, while the latter is so bluesy and ballsy it blows me away, leaving me wishing the background matched her rough, raw energy.

The backgrounds and arrangements stagnate. The jazzier and groovier songs could stand to swing and sit back more on the beat, and the dance songs would benefit from more driving energy. Instead, they perform quite accurately and carefully, to the detriment of the energy of the disc. Andrew Chaikin supplies the percussion on Can't Get Next to You and Don't Leave Me This Way, both of which benefit from his driving energy, although wicked percussion isn't the simple solution. Dilemma's own percussion is just fine.

I find I'm most drawn into the group's sound when they are all singing as if they had the lead. Their versions of Alanis' That I Would Be Good and Sting's We'll Be Together clearly hit their peaks when they hit the breakdown near the end of each. Each voice is all of a sudden paying more attention to her line's motion and energy. They go somewhere, and this causes my ear to go along with them. Good stuff.

My last gripe is that Song For a Winter's Night and I'm Beginning To See the Light could have been left off the disc. They don't mesh with the sound of the rest of the disc, and they aren't performed well enough to merit disrupting the flow.

This disc is a solid debut CD: a talented, if somewhat timid, step into the professional world. With some more time and experience under their belts, they'll be all set to start turning heads in a big way.