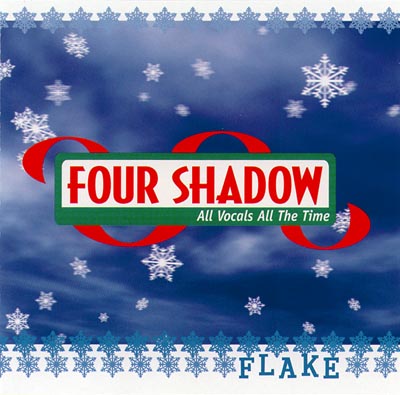 The first thing that bothered me was the transition from You're a Mean One, Mr. Grinch to O Holy Night. How do you possibly pull this off? I think it might have been a better idea to hold the former for a later spot on the album track list.

I did enjoy Karl Schroeder's bass vocals on this album. He did an excellent job of capturing the style and feel of a bass guitar. He obviously studies his craft with the highest level of attention to detail.

The highlight of the album was That Time of Year, an original to Four Shadow. This is a fabulously well-written song. Andrew Tullar gives the song enough commercial "popness" to make it catchy, but still enough guts to make it a keeper. Major kudos on this track!

Maybe I just had extremely high expectations for this album, but the truth is it doesn't do much for me. There are plenty of great a cappella and instrumental Christmas albums on the market. With that said, I just don't see much reason to add this one to your collection over other, better albums.

Four Shadow has done it again. I enjoyed their previous album, Where Have You Been, and have been looking forward to their next release. Flake is a delightful Christmas compilation.

The tone of the group is a bit different on this album. There is only one original song, and there are only two silly songs: You're a Mean One, Mr. Grinch and Blue Christmas. Let me stress that these changes are not bad ones. These guys can really sing. Their harmonies, solos, percussion and arrangements are great. I am interested in seeing them perform live — there are four guys in the group, and there are way more than four parts in these arrangements! The album is a nice mix of music, ranging from rocked-out versions of Rudolph The Red-Nosed Reindeer and The Little Drummer Boy to beautifully done traditionals like O Holy Night and Ave Maria. Andrew Tullar is the songwriter and soloist on the pleasant original track, That Time of Year. Stacy Carolan, singing Blue Christmas, does an Elvis impression that also reminds me of the cartoon character Droopy the Dog. (There is also a funny monologue, thus making this one of the "silly" songs.)

Though it isn't That Time of Year yet, this is still a great album to own. Good work, Four Shadow!

Every so often you get an album across your desk that makes the reviewing job pretty easy. Such albums tend to share the common bond of not being exceptionally atrocious or wonderful, allowing an easy grasp of the disc via only a few listens. Thus, falling into this category could be a compliment or a criticism. Fortunately Flake falls solidly on the high end, with generally endearing and capable performances across the board.

Four Shadow, a four-man group based out of Minneapolis, is a quartet of sweet-looking and -sounding guys-next-door. This would be the a cappella group you bring home to Mom, with generally strong tuning, good blend, and the all-important sound that they really enjoy what they're doing. Flake has some creative arrangements that I wish had been credited; whoever was responsible for the interesting chords on Rudolph, O Holy Night, and O Come, O Come, Emmanuel deserves kudos. Some of their riskier attempts fall a bit short of the mark, as with the humor in Blue Christmas, the carol mish-mash of Christmas Soup, and the upbeat-technoish take on Little Drummer Boy. But capable solos, led by Kevin Steinman's more poppy interpretations, and a particularly strong command of ballads like tracks #3, #7, and #10 more than compensate.

I think it would be difficult to make a Christmas album which really pushes the envelope in excellence and creativity, so Four Shadow gets a hearty pat on the back for making a solid, all-around pleasant contribution to the ever-growing stacks of holiday albums. Nice job, guys.

Available through Mainely A Cappella and www.fourshadow.com.