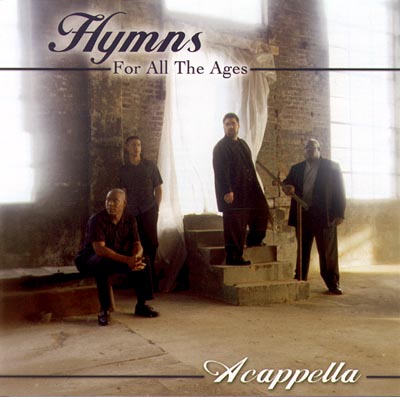 God bless America. This country is the home of industrial music, fortified processed food, and market-to-the-masses Protestant religion. The Acappella Company's disciples are witnesses to all of the above.

Okay, the link to fortified processed food might be a little tenuous. But as a metaphor, it's on the mark: conveniently packaged, injected with lots of powdered vitamins, it fits inside a casserole dish and looks at home in almost any kitchen. Acappella, too, owes much to 1950s Madison Avenue for its latest album of traditional American hymns.

Great Is Thy Faithfulness reminds me of carousel music. Burdens Are Lifted at Calvary has the same cadence as the Del Vikings' Whispering Bells, with an instrumental that sounds like the Sesame Street kids parading around the neighborhood with Oscar and Big Bird. The Great Physician could be karaoke over a department store muzak version of The Little Drummer Boy.

It gets better: There Is a Habitation has that poky, western-cliche Happy Trails feel, while Where He Leads Me I Will Follow is built around the bass line from Michael Jackson's Billie Jean.

All of these productions are well-sung and technically massaged into a highly professional package. (Sometimes the engineers get carried away, and the whole thing sounds like it was played on an electric organ, but we won't dwell on that.) The one thing I was not reminded of — anywhere, on the entire disc — were the majestic 19th century hymns that this album is allegedly built around. Those hymns were based around women in floral dresses and maybe hats, men in their best suits, dusty Southern churchyards, and a certain amount of subdued propriety. My great-grandparents sang them, my grandparents sang them, and my more religious relatives probably still sing them today.

Comparing that music to Acappella's Hymns For All The Ages is like comparing those churches to today's religious megamalls, where hundreds and sometimes thousands of people show up in blue jeans and stay afterward to bowl or eat at the in-house McDonald's. The Gospel is reaching at least as many people as ever, but in a very different way than its 19th-century incarnation. At times, the link is nearly invisible, and so it is with this music.

Acappella's Hymns... is hugely professional and for the most part quite moving. The four primary singers and the additional vocalists (the notes do not distinguish duties by song) are all gifted and skilled. The album as a whole has gone through the finest production. There are in fact few other groups this reviewer can bring to mind who sound so solid across all their tracks; inevitably, Acappella recalls Take 6, and at times The Nylons at their best.

The music performed on this disc is perhaps not literally "for all the ages". With one or two exceptions, the arrangements are vigorously contemporary; only We Praise Thee, O God and, to a lesser extent, Pass Me Not sound at all traditional. The remaining tracks are slick modern reworkings of spiritual and gospel standards, with the emphasis on modern: percussion, wonderfully nimble walking bass (a delight!), overdubbing, and shimmer across all the parts.

What results is an acoustically very pleasing album. Many listeners used to more obviously traditional approaches to spirituals may find this ministry not immediately moving. But they should give it time, and warm to the crisp sounds offered up by Acappella.

As a person who has sung a lot of sacred music, I was faced with a dilemma in Acappella's Hymns For All the Ages. The track list includes a very nice selection of tunes familiar to many churchgoers. Those of us who know these songs have preconceived ideas about the appropriate emotion, meaning, and style for each one. Acappella's contemporary-sounding arrangements pose a challenge to those set ideas.

Acappella may just have pulled it off. As I prepared for this review, I listened to the CD numerous times, more than I usually do. Each time, I came closer to embracing Acappella's interpretations. Finally, the songs began to feel reasonably comfortable. Some of these songs will never be on my top play list. But some of the others are growing on me.

If you wish to experience what I have been going through, listen to the first cut, Great Is Thy Faithfulness, which the group manages to stylize into a waltz. Then, listen to cut 6, Victory in Jesus, which I can only call Jimmy Buffett Gospel and brought to mind the sacred music of a Caribbean church. The country sound on cut 9 made me want to jump on Ol' Paint and head out into the American West. Nothing prepared me for what I heard.

There are only a few production problems. It sounds like the first few tenths of a second of the opening track were cut off. Several songs sound like the highs are clipped or seriously limited.

Having gotten that out of the way, I eventually have found this to a pretty good album. Acappella sings very well. Their use of electronic enhancement in most cases is appropriate. They even have a couple of tricks to focus the attention of the listener.

I can see how Hymns For All the Ages might be used to introduce a generation to these songs. With nontraditional styles of worship sweeping the American religious community, I can see this CD being incorporated into services. I can see my son listening to it. After countless spins, I can finally see me listening to it, too.