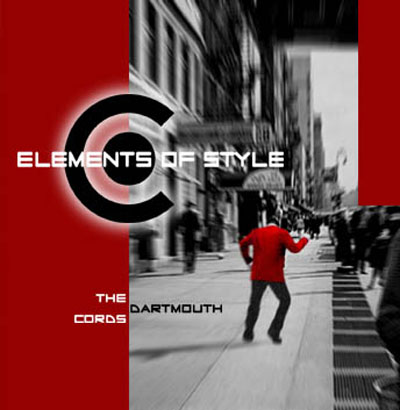 When I was singing in a college group, most of the auditionees we saw fell into two categories. There were the musical theater dorks, who were confident, powerful soloists, but who stuck out in block like Ethel Merman in the Vienna Boys' Choir. Then there were the choir dorks, who did a gorgeous job on backgrounds, but struggled to scrub the squareness from their solos. One of the other groups on campus was known for preferring the musical theater auditionees; we put our money on the glee clubbers.

Sounds like The Dartmouth Cords have the same audition philosophy we did. I wasn't at all surprised to learn that lots of Cords also sing with The Dartmouth Glee Club. It shows in the smooth blend and way-above-the-norm tuning of choral pieces like And So It Goes and Twilight Song. Musical errors, such as sharping baris in the Stone and Light intro and sour chords in Romeo and Juliet, are few and far between. Unfortunately, this choral slant also shows in some of the solos, which can be a bit too staccato and matter-of-fact (Crazy; Romeo and Juliet) for this pop/rock repertoire. The Cords attack some of the most physically demanding solos in rock (Pride; Janie's Got a Gun), and their lungs often come in just a bit short. Oddly, soloist Chris Boies easily handles the throat-splitting held notes of With or Without You, but struggles to sustain on Lady in Red.

With a couple of exceptions, arrangements are one of The Cords' strengths. Most songs are designed with care, with subtle and not-so-subtle shifts from verse to verse. On the other hand, The Cords don't credit Off the Beat for inspiration on their Don't Stand So Close to Me arrangement, and it's a hell of a coincidence that it includes a King of Pain quote in the same place.

The real problem is here is the overly familiar repertoire. Out of 15 songs, there are only three that I don't already own a collegiate version of. One of those three is a Dartmouth hymn, and another is I'm Too Sexy, which is a musically questionable choice for a CD, anyway. Next time, I hope The Cords apply their considerable talents to some fresher material.

College a cappella continues to increase in quality. The Dartmouth Cords' album Elements of Style is another in a quickly increasing list of CDs that amaze me. The Cords spent three years and involved students from seven different graduating classes in producing Elements, spanning a diverse group of songs.

My notes were frequently on the positive side. The CD starts softly, as if in a cathedral, with U2's Pride. The tune quickly picks up energy, tempo, and emotion. It presents a very nice landscape of ups and downs in all three areas. The vocal percussionist is very nice, but most of the percussion is created by the rhythms of the singers. What a great way to start the CD.

Jumping to track 4, I'm Too Sexy, you can find the same types of comments in my notes. The Cords sing with good energy, driving the song forward toward the conclusion. The soloist, Conner McGee, does of great job of forcing the background singers to keep up, and they do. As I listened, I thought that this song might be good enough to sell or at least get some radio airplay. The same could be said about Lady in Red.

I thought two songs on this CD were tremendously gutsy: cut 13 (Billy Joel's And So It Goes) and cut 14 (the Dartmouth traditional Twilight Song). These are classic college men’s glee club arrangements and do not have the energy level to stand up well when measured against the other songs on the CD. However, I love that they had the moxie to do this. It is important for a cappella groups to sing without embellishment; sing with no jive; just stand and sing. You can learn the fundamentals of the craft by doing so. Then, you can take those skills to sing Depeche Mode's Enjoy the Silence. Yes, they are from two totally different musical genres, but you need to master the first in order to succeed with the second.

Two particular negative points should be learned from this CD. Even an excellent arranger cannot save a bad song, and a bad song can be made even worse by the arranger. List to track 8, Romeo and Juliet. It is ruined by a short verse and chorus that are repeated over and over and over for five minutes. The arranger blew it by trying to expand an idea worth two minutes of the listener's time beyond the song's natural length. The same can be said about cut 11, Man on the Moon. I don't care how long the original hit was. Next time, get an outsider's opinion. If the outsider isn't clamoring for more after a couple of choruses, cut the song.

Did I like the CD? Yes. Were there some songs I'd rather not hear again? Of course. Can we all can we hear the improvement in modern college a cappella? Absolutely, every time we listen to another group's CD.

Being Varsity Vocals staff, I'd heard of the Dartmouth Cords, but I'd never heard them. So I was excited to receive Elements of Style. The guys in corduroy don't disappoint. I love this album, even though the disappointing tracks (Man on the Moon, Romeo and Juliet, and In the House of Stone and Light) mar its true excellence.

Speaking as an '80s child in college in the early '90s, I found The Cords' repertoire comforting, but not innovative. Blessed with great arrangements, strong musicianship and exceptional production values, they fail (if you consider "average" failing) to maintain energy, intensity, and creativity throughout the songs and album.

These guys can rock, notably on the opening and closing numbers. Unfortunately, those tracks and others inexplicably shift to adult contemporary cheese rather than maintaining the intensity and edginess of the originals. When the AC style is warranted (Crazy, Lady in Red and Barely Breathing), they excel.

Track lengths exacerbate the tendency to bore. Most selections last longer than four minutes with one just shy of six. DANG! Less is more, and I really wanted less of Stone and Light, Romeo, Pride, and Man. Even the diehard fan wonders when they'll be over.

Adam Green and Allan Mabardy are prolific arrangers, contributing 10 of 15 tracks. Their outstanding arrangements confusingly suffer from mediocre endings. Each penned some of the best (Don't Stand So Close to Me and I'm Too Sexy) and the worst (Stone and Light and Blame It on the Boogie) songs, respectively. One can see how their skills developed. Kudos to Aaron Fiske, whose work on Crazy and Enjoy the Silence is top notch.

Purists beware! I like studio effects, but the tenors are heavily processed and the basses are occasionally too buzzy and unbalanced.

Ironically, my favorite track is the electronica track, Enjoy the Silence. Fans of Streetnix's Ignition and the song Tic Tic Boom will rejoice. The track's MAJOR fault is that the arrangement eliminates the harmony lines. Are you kidding me?! Otherwise, I would have supported a BOCA selection and CARA nomination.

Highlights include Chris Boies' brilliant vocals on With or Without You and Lady in Red, the kitschy machismo of Conner McGee's I'm Too Sexy, and the inclusion of the Dartmouth traditional Twilight Song.

I was surprised to learn that Elements of Style is the group's third album. The liner notes are atrocious: no mention of previous recordings and a lack of supporting vocalist or percussionist credits for any of the tracks. Ghastly and unforgivable. I know there are some mad Cords moms out there.

The Cords will be special to me for years to come. Despite the small faults, I fully recommend Elements of Style; I'll just skip over the songs I don't enjoy.

For current ordering information, send mail to cords@dartmouth.edu or visit the group's website.