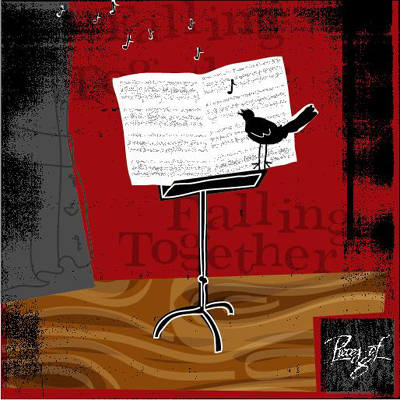 Falling Together is ultimately a strangely mixed bag. The singers are earnest in their delivery, at times to the point of compromising tone and transforming sincerity into insipidity. Tuning is right on, but blend suffers from overly-distinctive voices jangling instead of jingling (especially in unisons). This last problem is abetted by the production, tending to faithful (i.e., not smoothing out, warming, or changing most of the voices on most tracks) but occasionally introducing echos and filters to largely distortive effect (e.g. on the Cohen track).

All told, for this reviewer it is emotion which gets shortest shrift. As I said, the singers are earnest, but so consistently earnest in such the same way for track after track that they sound hobbled. This may be a problem of the medium, but one wishes they could cut loose and strong-arm their chords a bit more. Emblematic of the singers' apparent approach is track 8, a medley of Kansas City and Route 66. Both songs refer to long-ago institutions (Route 66 itself, and Kansas City as, if you will, a cosmopolitan destination resort for the rural hard-up and fancy-free). The problem is that the singers seem not to believe what they're saying. They do not transport us, but rather repeat the lyrics as if the song were an exercise of musical production.

That is the crux: whether due to the singers' approaches (tone, blend) or to the nature of the genre (elaborate chords, syncopated delivery), the songs do not sound sincere. They sound staged, and the singers equally posed but insincere.

All in all, dissatisfying.

Confident, tight, and classily stylized, Pieces of 8's Falling Together is bound to please many jazz a cappella aficionados, despite a few weak points. With a track list consisting of jazz standards, reinterpretations of other well known tunes (two from The Beatles, one from Jesus Christ Superstar) and one original based on a religious text (The Price of Wisdom), the disc presents a nice variety of moods and dynamics while maintaining a smooth flow. All tracks were arranged by the disc's producer, Charles Mead.

The group's tuning is almost always exquisite, and their close harmonies are strong and tight. The blend, however, isn't as smooth as it should be at times. The women tend to have brighter, pinched tones, which sometimes clash with each other, or with the breathier baritone and tenors. Much of the time this works very well stylistically (You Took Advantage of Me especially), but at times it can become grating. When soloing, however, the women can really soften their tone, resulting in a couple of beautiful leads on You Don't Know What Love Is and I Don't Know How To Love Him. The men's turns on the leads are not as successful, unfortunately. The solo on Blackbird, particularly, pulls the overall quality of the track down, despite a nice supporting block.

The arrangements themselves are generally quite interesting and appropriate, sometimes smoothly moody (You Don't Know What Love Is and The Price of Wisdom), sometimes excitingly vibrant (You Took Advantage of Me and Kansas City/Route 66), sometimes just cool (Bird on a Wire). They tend to have several sections, and the transitions sometimes result in an energy drop or an awkward shift, but generally drop back into a section which restores the flow. Occasionally there will be a really quiet section thrown in for effect (the quiet transition out of Bye Bye Blackbird, for example) which will lose my attention on many of my listens through the disc.

Despite my few gripes, the album is generally a pleasure to listen to. The arrangements keep things interesting, and so does some neat production styling (the vintage phonograph effect on Bye Bye Blackbird, the radio-voice effect on the lead on Bird on a Wire, and the horn imitation in You Don't Know What Love Is, for example). In general, this disc is a strong and enjoyable jazz performance. Worth a listen, if you're in the market.

Pieces of 8's latest entry is an average album from what seems to be a better-than-average vocal jazz ensemble. Highlighted by lush chords and new arrangements of many overdone jazz standards, Falling Together offers jazz enthusiasts a credible but altogether uninteresting assortment of cabaret pieces.

Most of the issues are on the production side rather than the performance side, and although I pride myself on a wide-ranging appreciation of music, parts of Falling Together either put me to sleep or kept me awake because of strange harmonies and arrangements. Bird on a Wire exemplifies most of the vocal percussion, distortion, blend, and studio mixing problems I noticed throughout the recordings. The choice to use vocal distortion and post-production mixing on some pieces and not others (You Took Advantage of Me) makes the album feel inconsistent and disconnected. Tuning is right on key, but the lack of blend is especially evident in such familiar pieces as When I'm 64 and Kansas City/Route 66, bringing down the tuning/blending score.

Soloists punctuate the album with fresh and rich mezzo and baritone voices, with a convincing performance by bass Clayton Cromley. Still, each sticks out a little too much in the background and it's easy to pick out each vocal line. Especially disturbing is the microphone pick-up of various vocalists during their solos, who seemed like they were moving around my head when I listened to the album on headphones. Breath sounds are noticeable in multiple solos and background sections.

The arrangements, written by Charles Mead (also the album's producer), attempt a balance between creativity and faithful interpretation, but sometimes come off as cloying and annoying. This musical theater enthusiast found that the arrangement of I Don't Know How to Love Him from Jesus Christ Superstar tried too hard to transform the beautiful ballad into a jazzy cabaret number that practically turns into Rent's Seasons of Love for a brief moment. The tuning is on, but the arrangement is distracting on its own. Repetition of emphasized phrases such as "I have seen/Yes, I've seen/I have seen/Yes, I've seen" in The Price of Wisdom are somewhat disturbing and elementary, contrasting with the feeling brought by the song's dissonance and minor chords. Somewhere is credited only to Leonard Bernstein as composer, despite the insertion of a few lines from Harburg and Arlen's Over the Rainbow from The Wizard of Oz.

To jazz enthusiasts new and old, Falling Together leaves much to be desired. From unintended breathy transitions to serious blending issues to poor arrangements, Pieces of 8's album falls short of the potential evident in the simple vocal talent of its members.