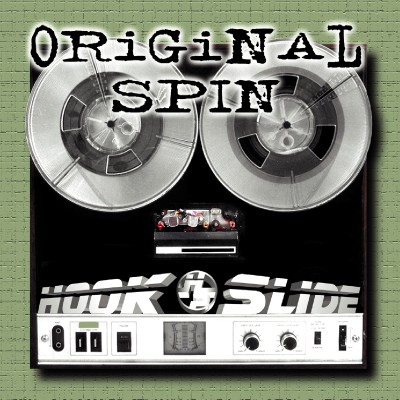 Hookslide is a likeable San Francisco-based all-male pop group with lots of energy and tight high vocals. 2 Covers. 11 originals. Good ratio. Good soloists. Good arrangements. It's a good group, but they have some work to do before climbing the extra notch.

Production-wise, there is some distracting autotune abuse. Here the too-tight back ups on Original Spin can sometimes sound like a harmonium (Needed More, Don't Let Me Go). It's worth noting that the negative effect of excessive autotuning can last beyond an individual song. It's a little bit like showing how the magic trick is done; it takes some fun out of the next trick.

Bill Hare does do an excellent job mixing the upper voices, but I would have preferred a little more presence in the low end to balance things out. VP, bari and bass occasionally lack the satisfying oomph that modern a cappella recordings have begun delivering as a matter of course. Hookslide's sky-high arranging choices play some part in this as well.

Though there are only 4 members, Original Spin's tracks evidence bass, VP, 4-part back up and leads. It's an artificially rich sound, but a good choice in helping to fatten up the recording while remaining a small enough ensemble to survive at being pro.

The writing is pop. Most songs depict relationships gone slightly sour. The lyrics don't often tell a story or even paint an image so much as find sometimes clever, sometimes cliché ways to describe the emotions of longing and dissatisfaction. ("Baby it's you that I can't deny/Baby it's you if you wanna try/Oh and it's you I need by my side/Baby it's you, you, you that's on my mind")

The notable exception to this is the playful Funk Bus, which sounds so evocative of The House Jacks as to be almost a kind of tipping of the hat to the more well-known San Fran-based a cappella group.

All in all, Original Spin is an enjoyable first full-length release from Hookslide, but not quite a must-have.

In a world of rapidly proliferating groups and competent a cappella recording engineers, it becomes harder and harder to truly stand out amongst an ever-growing catalog of solid CDs. Hookslide shows that a decent command of the fundamentals — strong blend and pitch, energetic block-singing, capable soloists, and some catchy songwriting — goes a long way to get you there.

Original Spin features only two covers, a capable take on the requisite early '90s tune Don't You (Forget About Me) and a satisfyingly dramatic version of Aerosmith's Dream On. While the originals were largely solid, I was still a bit surprised by the largely group-penned playlist, since the full repertoire on their website includes so many covers. The somewhat inane lyrics won't win any awards, but creative arranging and an edgy, bright sound more than compensate, lending the tracks an infectious energy and enthusiasm.

There is a certain level of polish that attention to detail and precision in rehearsal and the recording studio can accomplish. The gap between that and true excellence is rather hard to define — a weird mix of creativity, charisma, and (not to be clichéd) some je ne sai quois. While Hookslide doesn't quite knock it out of the park, think of Original Spin as a nice line drive to right field.

Hookslide's Original Spin, the group's first full-length CD, nobly brings this California-based men's quartet into the recorded a cappella world. Between spunky original pieces written and arranged by all four members, memorable covers including a near-perfect imitation of Simple Minds' Don't You (Forget About Me), and the CD's final cut, a tribute to the Parliament Funkadelic, these guys entertain with the energy and creativity of George Clinton himself.

As most debut albums do, Original Spin has its flaws. The seasoned a cappella aficionado will note a rather "unplugged" production quality; most songs sound like what I would imagine hearing if Hookslide sang in a concert hall without amplification or other equipment. This accounts for over half of the blend issues I discovered on the album, in addition to the rather unoriginal vocables most professional groups eliminate through mixing or studio distortion. In both cover songs, dynamics produced by human voices rather than the slide of a volume button in the studio are a bit grating to someone with a sizable familiarity with recorded a cappella. Still, I like knowing that if I ran into Hookslide on the street, I'd hear something pretty close to the sound on Original Spin.

I have to give the album a 3 for tuning and blend because while the tuning is quite good, changes in dynamics that are milliseconds off and uncultivated use of syllables in the background add up to a background that sounds more like a budding collegiate group than a professional one. Yet this all tells me they're not faking it with fancy electronic mumbo-jumbo. Hookslide is the real thing.

Despite the CD's shortcomings, the guys in Hookslide are no greenhorns. Clever arrangements of originals run the gamut from R&B/doo-wop (What Sin) to boy band (Needed You) to the aforementioned funk. The group's animation and spark come from bass and percussionist Jonathan Pilat, whose vigorous rhythm and slap bass sound propels most of the songs. Pilat also wrote the CARA-winning arrangement of Aerosmith's Dream On, in which baritone George Hoffman does justice to Steven Tyler's outrageous lead vocals from the original.

Given the nature of recording and the theatrical charisma which it lacks, Original Spin offers novice a cappella fans and Hookslide groupies an excellent glimpse into the group's musical capabilities and promising talent. Veteran ears will find this album slightly below the standards of professional recorded a cappella. Nevertheless, it's found a spot in my CD rotation rather than in my closet.