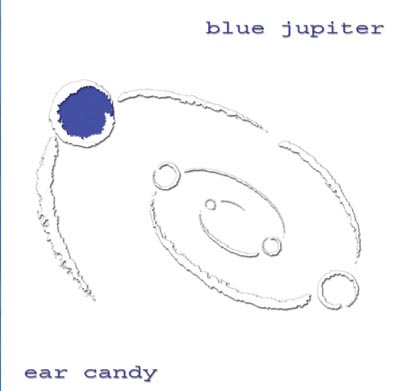 Ear Candy opens with the campy scene of The Jupes heading off on a singing road trip with one reluctant member. A fine but unmemorable jam follows as they "scan the radio". But after this bit of revving up, the CD explodes with energy, creativity and deft musicianship. From the funk stylings of Sir Duke, to the depth of Hallelujah (a song the masses will recognize from the Shrek soundtrack), to clever originals (like Green Shaggy Carpet Ride) that could easily achieve a cappella standard status, to finding the spark of excitement in overly well-worn classics like Stand By Me, Blue Jupiter has their act together. Dynamics, blend, phrasing, and production are all excellent. Most importantly, Blue Jupiter is not rehashing the same old, same old. Their sound is their signature.

Influences? Sure. You can hear faint strains of Rockapella, m-pact, and The Blenders (no surprise there, as Tim Kasper, Blue Jupiter's manager, is one of The Blenders), but The Jupes have come into their own. If they can manage to stay together through the long haul which is pro a cappella, this all-male pop quartet (soon to be quintet, according to their web page) will inspire singers for years to come.

Pull out your telescope and keep your eye on Blue Jupiter. These guys are going places.

I think that's the best way to sum up my feelings about Blue Jupiter's Ear Candy, as thoroughly polished, fabulously arranged, magnificently produced, and fantastically sung a debut album as a group could ever hope to release.

Those who like rockin' covers should check out Blue Jupiter's take on Stevie Wonder's Sir Duke, or their spin on the Santana-Rob Thomas collaboration Smooth, or the Harmony Sweeps Chicago Regional co-winner for Best Arrangement, Mr. Pinstripe Suit from Big Bad Voodoo Daddy. Wanna hear these guys tackle something a bit more ballad-y? Have a listen to the gospel-influenced Hallelujah, originally by Leonard Cohen. OK, but can they write their own stuff too? Sure! The Sean Altman-esque Green Shaggy Carpet Ride is a treat, and Nightlight, acoustic guitar notwithstanding, has some of the most poetic lyrics I've heard from a pop a cappella group in some time.

Any gushing review for this terrific effort from Blue Jupiter needs to single out Marty Gasper, the latest triple (quadruple?) threat to hit the a cappella world. Yeah, the guy can sing, but his talents only begin there. All of the v.p. on the album is by Gasper, and I'm just baffled by the fact that I had never heard of this guy before now — he's fantastic. And just for good measure, Marty also was one of the engineers and one of editors on the album, and he mixed it too! If there's an MVP award for a cappella in the state of Minnesota, he gets my vote.

Yes, I have quibbles — even a rave review has a few qualifications. Blue Jupiter is a group of four guys and there is noticeably more than four guys' worth of music-making going on throughout the album. The v.p. alone is a 5th track in most cases, and some songs — most notably Stand By Me — have vocal harmonies that need more than 3 backup singers. One wonders what these guys sound like live, though their website shows a busy concert schedule, so I imagine they still manage to sound pretty darn good. Somehow the tricks don't bother me, because they're used to such wonderful effect. Whether the guys just have great instincts (since they engineered, edited and mixed the album themselves), or whether credit should go to their manager, Tim Kasper (of The Blenders), when the music is this good, the studio effects — be they overdubs, pitch adjustment/autotune (which, at least to my ear, sounds like it's used liberally throughout) or any other digital wizardry — just don't matter all that much to me.

A couple of other minor points. Chris Chatham, you have a killer tenor. But you don't have to try to be Scott Leonard to prove it. By the end of Sir Duke, you're pushing a little too hard. To all the guys, a little dynamic variation would be welcome. Don't get so wrapped up in how bright the sound is at the expense of a little finesse and feel. Lil' Red Ridinghood was the one that bothered me most. Sounds great, but the chorus is way too bright and in my face. Mellow can be good too, ya know. Keeping it a bit mellower in Stand By Me would have been nice too. And 99 Bottles of Beer as a theme to carry through the album? OK, it's cute the first time, but it gets old fast. The music speaks for itself ... the attempt at comedy just cheapens it.

But I'm really nit-picking here. I'm putting this one in my CD changer, loading up the MP3 player and calling all my fellow a cappella friends to give them a heads-up. Last year it was Cadence's Frost Free, a killer debut album from a group I'd never heard. This year it's Blue Jupiter's Ear Candy. Buy it. Now. Wow.

The drive from Bloomington to Indianapolis is boring as heck: You're heading through cornfields up a 2-lane highway, praying you don't get stuck behind a tractor. For a city girl like me, this is the gloomiest and longest hour of my life. The day Blue Jupiter's debut Ear Candy came in the mail, however, all that changed. I found myself rolling down the windows, cranking up the bass, and bopping along to the tunes as I would with any pop album. Before I knew it, the RCA Dome was in view and the sky turned a fantastic shade of blue. I can't describe how much this album rocks.

The perfect road trip companion, Ear Candy offers a fantastic mix of familiar pop songs, with an old standard and a few new original pieces too. The group has managed to create a CD I've copied for every player I own (car, computer, stereo, and yes, even the CD player in my shower), so that I wouldn't forget it in any one place. Amazing production quality combined with the outrageous talent exploding from the guys themselves manifests in this must-have for any a cappella enthusiast. The opener, On the Road, sets the listener up for what could indicate disaster (the first verse of 99 Bottles of Beer on the Wall) but instead pleasantly feeds into Groovin' to Blue Jupiter, a burst of energetic scat that I love to listen to while shampooing.

There's so much on this album that deserves mention that I can't even fit it all in one review. Tim Foust's bass could rival that of former Rockapella lowman Barry Carl, especially in the crafty Sir Duke and Hallelujah arrangements. Sometimes I like to pretend my name is Michelle, and that's what he's singing to me on the last track. Green Shaggy Carpet Ride, penned by Foust and Marty Gasper, is certain to be in constant rotation on a cappella radio shows. Chris Chatham's solos make me melt, and soulful Christopher Eloranta on Hallelujah has become my A Cappella Man o' the Month. Even Stand by Me keeps my attention where other versions have put me to sleep. Simply put, Ear Candy is one of the best debuts I've ever heard, destined for numerous awards. I always swore I'd never become a groupie, but honestly, if I weren't in school I'd be on the road following them around the Midwest on their college tour this fall and winter.

The room I grew up in at my parents' house has a green shaggy carpet. The guys in Blue Jupiter can take me for a ride on it anytime.

Ear Candy is available through CD Baby or via their link on the group's website.