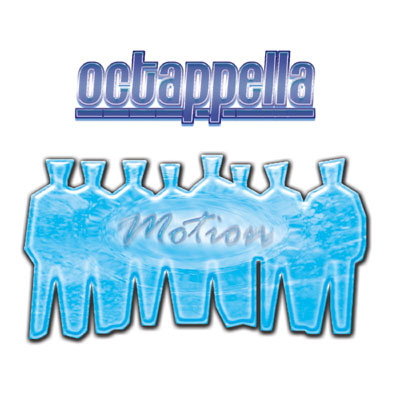 Octappella is a group of eight guys and Motion is their second album. It is mostly covers, with four originals and one parody. The originals are pretty good; my favorite is Awe by Wes Brewer, which has a catchy background.

Baldhemian Rhapsody is one of the better tracks on the album. Octappella's version laments going bald at age 19. First of all, this is a very difficult song to do. The solo is great for the most part, and the background harmonies were pretty tight. There were a few shaky moments, but on the whole it was my favorite track on the album.

Generally, the music on this album is sort of bland. The songs are inoffensive, the pitch is a little shaky, and the blend isn't perfect. The soloists are good, but not outstanding. The production is fairly minimal, with the exception of a really odd popping in the soloist's voice on the opening track.

The arrangements are pretty solid, but not always well executed. When I First Saw You got a little messy with multiple solo lines clashing in the climax of the song.

These guys need to clean up the blend and execution of the arrangements, and judiciously use modern technology to enhance their music.

The last track, a U2 cover (MLK) could have been very pretty, but the mix in the background brought the tenor line too far forward in the opening chords. The blend needed to be perfect, and it was not.

All in all, Motion is a decent album, but not one I will add to my permanent a cappella collection.

Octappella's Motion isn't a perfect album, but it's a heck of a lot of fun. The group's impressive intensity of sound channels well into kicking tunes like Standing Outside the Fire and Man in Motion. The aforementioned Garth Brooks cover captures most of the best of what Octappella has to offer: a sparkling sound, effective arranging, extremely strong block singing, and generally rollicking fun for singer and listener alike. But it is a shame that numerous small errors in tuning and attention to detail (e.g., entry and exit by block singers) mar an otherwise strong collection of tracks. And while the majority of tracks are upbeat, capitalizing on the group's infectious energy, the few ballads failed to match that level of excellence. In particular, a more subtle approach to U2's MLK would have emphasized the group's exceptional blend and creative arrangement, rather than slamming the listener with chord after chord.

The album's highlight, Baldhemian Rhapsody, is easily one of the best humor tracks I've ever reviewed. It remains the only humor track that made me laugh out loud while listening; wittily rewritten lyrics to Queen's over-covered standard include the names of famous baldees like Michael Jordan and Patrick Stewart while lamenting the soloist's state "whenever the wind blows". I would have appreciated a bit more attention to tuning among those first tenors, but the humor more than makes up for the occasional missed note. Motion also boasts a number of originals, a standout being Wes Brewer's catchy Awe. The original lyrics point heavily to Octappella's Christian roots, but non-religious listeners will find a number of decent hooks here as well.

Ultimately, I get the feeling that Octappella would be a phenomenal group to hear live; their energy and arrangements are so effective that I wish they had taken a bit more time in rehearsal and studio to iron out the wrinkles. While Motion is a formidable effort, the few moments of brilliance amongst otherwise merely pleasant tracks leaves the listener just short of fulfillment. With luck, their next outing will take those moments and spin them into an album really worth shouting about.

If the Billboard charts were designed to track the listening habits of only the state of Utah, Octappella's Motion would probably be sitting at #1 right now. While Octappella's at-times stilted, sticky-sweet sound might draw big crowds in Provo, it's doubtful this group's warm hometown reception will extend to the other 49 states. Octappella are about as cool as my grandmother, and their saccharine debut interests me about as much as her Christmas fruitcakes.

Now that's not to say that these guys lack talent — quite the opposite. Most of Motion is characterized by a solid group blend. There are times when the soloists carry a great deal of power and emotion in their voices — especially Ryan Judkins on Man in Motion and Matt Cropper on most of his tunes. Overall, there is a lot of confident singing on Motion. Octappella should be proud to have put out an above-average effort their first time around.

If I were married to one of the guys in Octappella, I'm sure the original songs on this album would be very touching and meaningful. But I'm not. If Octappella plans on performing and recording originals in the future, they should only allow Matt Cropper to write them. He wrote and sang the solo on The Voice, which I was surprised to find myself kind of looking forward to after the fifth spin. The other originals are full of hackneyed lyrics and forced phrases. Like a bad gift from one's significant other, I guess it's the thought that counts...

There are two real stinkers on this album: I Want You Back and Baldhemian Rhapsody. If I were in charge of the world, I would pass a law requiring that no one should ever attempt Michael Jackson's countertenor solo in any register but the original one. Also, at 2:08 into the track, the accompanying solo is embarrassingly square. Awarding this one a "2" was extremely generous on my part. Baldhemian Rhapsody starts off a little bit funny, but come on — even Jerry Seinfeld probably couldn't come up with five minutes worth of quality bald schtick. The singing goes very sour in the last couple of minutes, too.

On a positive note, Octappella display a high level of professionalism and skill when tackling more choral works such as Prayer of the Children. My hope is that Octappella's next effort will showcase more of songs of this type. Likewise, I think it best to let others handle the pop covers next go-round. Overall, Motion is a good first effort, but leaves plenty of room for improvement.

For current ordering information, visit the group's website or Primarily A Cappella.