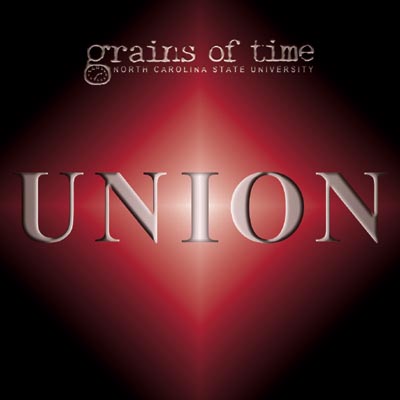 The Grains of Time have a choral sound, more like that of a glee club than most collegiate a cappella these days, especially for an all-male group. Blend is smooth, harmonies lush, and chords for the most part locked into place. The singers shine on homophonic tracks or those keeping syncopation to a minimum. A Quiet Place is a standout, with intensity of feeling reminiscent of early Boyz II Men and a lovely barbershop-esque tag (barbershop shows up explicitly on Doin' the Raccoon). Homeward Bound shows off the group's strengths to great effect; it is subtly full of motion and quite moving. To Make You Feel My Love is also quite good, a few cracks in the lead's voice notwithstanding.

Although the choral or barbershop sound lends itself less naturally to the poppier selections, the singers generally acquit themselves well on these tracks, too. Because of their classically-trained sound, the group lacks some of the problems that can plague an all-male group, like excitable, uncertain rhythm, overemoting, showboating, or forced humor. As a rule, the Grains are in step with each other, in touch with (and in agreement about!) the feeling of a given song, and suited to the songs they choose to sing.

Some tracks are not as good as the others. Windmills suffers slightly from an arrangement that I feel fails to capture the driving motion of the original, and from a soloist audibly more comfortable lower in his range than higher. King of Spain shoots for some of the wacky humor for which all-male groups are (in)famous, with mixed results. Much the same may be said of Mr. Grinch, with the addition that the soloist, who does hit most of the notes, does not have the gravity to make the part funny. Comfortably Dumb features a vocal kazoo interlude; res ipsa loquitur.

The Grains do not use percussion. This doesn't matter except on a track already uncertain, the cover of Rockapella's Indiana. After a naked opening that shows off the dangers of multitracking (the soloist does not match his own pitch), the song drags on for a while before abruptly ending. I do not understand why collegiate groups continue to try covering Rockapella. Rockapella sounds on its recordings exactly as it does in performance. Collegiate groups rarely have the same ability; covers never turn out right. Percussion at least would have helped the song reach its strange ending with a bit more punch.

All told, the Grains have put together an enjoyable album with few very weak points. Their pleasant sound helps them make the most of many tracks, and is definitely worth a listen.

Bad news first. I seldom, if ever, hand out 1s for repeat listenability. But Union is an album I just don't want to hear again. Subpar production and uncreative arrangements of a cappella staples (Take 6's A Quiet Place; You're a Mean One Mr. Grinch; the ubiquitous Windmills) make for a tedious if not fully unpleasant listening experience.

Good news: there is hope here. Union is less than the sum of its average and nondescript tracks, largely due to a lack of vision or direction by Grains of Time. The group makes a few cardinal mistakes that could be easily corrected in their next outing. First, cut the numerous humor tracks. So few of them ever succeed on disc without the visuals that live audiences enjoy, and Union is no exception to the rule. Second, choose a genre or two and nail them. The album bounces all over the place from the disc-opening national anthem (the Banner should open ballgames, not CDs) to the aforementioned humor tracks to a number of barbershop-style arrangements to collegiate pop; the resulting lack of focus and style leaves the listener unengaged, particularly when most of the tracks are so mediocre.

But the group can sing. That is evidenced by largely solid tuning and energy and particularly lovely choral numbers on Homeward Bound and Prayer of the Children. A number of the barbershop tracks (Short People, Doin' the Raccoon) stood out as well. Whether this means the group should devote itself to these genres or redouble its efforts at pop (with more engaging and interesting arrangements and song choices) is a decision for the members, not a reviewer. Regardless of which direction they choose, their next album would benefit from more nuanced and targeted production, better repertoire choices, and greater attention to detail in their arrangement and performance. It is clear that Grains of Time is capable of putting out a fun and appealing album, and I look forward to the next effort — one that, with luck, should earn a few more spins in my CD player than Union.

Rich with layered sound, perfect tuning, and soulful arrangements, Union marks the latest achievement for the octet Grains of Time of North Carolina State. Their polished and refined music is sweetly pleasing to the ear, and fans of both the collegiate and barbershop genres will enjoy the thirteen tracks that run the gamut from Garth Brooks to Dr. Seuss.

Grains of Time has perfected their music with this wonderfully diverse album, free of vocal percussion but not of energy. Although a rather mellow mix of songs dominates the album, there is no lack of emotion or sound integrity that other college groups often fall short of when recording. The men's blend and tone quality is smooth and refined. One excellent example, To Make You Feel My Love, puts the tenors in falsetto, never straining to reach the high notes, but instead producing a round sound (I hear the ghost of choir teachers past in my head) that beautifully gives the background vocals a complete, full resonance.

The balance of the mellow and the comical shows that Grains of Time is capable of all kinds of music. Randy Newman's Short People is presented with both humor and integrity to the original. Too often, collegiate groups take their comical songs too seriously. Not the case here. Even Dr. Seuss has a writing credit on Union with You're a Mean One, Mr. Grinch, a delightful holiday piece to be enjoyed year-round with soloist and arranger Mike Brady doing a convincing imitation of the memorable original. And my personal favorite, Indiana, is a fitting tribute to the Sean Altman number with a classic feel that makes me feel like I'm back in the land of NASCAR and cornfields...oh, wait. I'm actually there.

All in all, a noble and polished sound with few faults to find. Union is an excellent submission to the collection of collegiate albums this season and an effort of which these eight men can be proud.