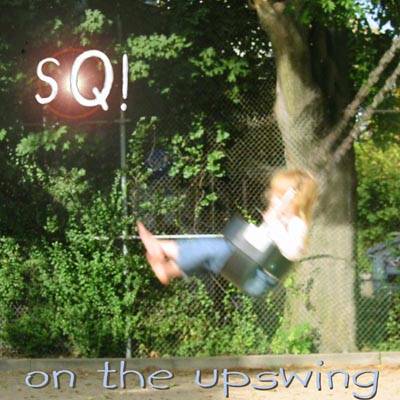 I would bet money that sQ!'s album On the Upswing: a) gets a track on BOCA 2003 — All You Want, Two Step or Think; b) gets nominated for CARAs for Best Album, Best Arrangement: Jeff Wong for anything he arranged or Sara Shansky for Two Step, Best Solo: Jill Beirne for Think or Dave Rosen for Two Step, and Best Song: See my predictions for BOCA; c) wins CARAs in the solo, arrangement and song categories (they might not get best album, read on to find out why).

In case you are confused, this album is quite fantastic and worthy of any discerning a cappellophile's collection.

sQ! has strong everything — soloists, arrangements, percussion, production, etc. Thumbs up to Jeff Wong, the mastermind behind it all.

Each track features a different soloist, which is a good choice and yet a bad choice because the stellar soloists are so stellar I wanted to hear more from each of them. Especially Jill Bierne — that girl has pipes! Most people shouldn't attempt Aretha, but Jill is phenomenal; it made me want to hear her on Come On Over (which was done a little under tempo, by the way).

They may not win best album, because while the beginning of the album is strong, the last few tracks are a bit disappointing. The songs are less interesting, and the overall effect doesn't compare to some of the previous tracks.

To reiterate: This album is superb — watch for them come BOCA/CARA time.

If the singers of sQ! were to give up singing and become painters, I bet they'd all be impressionists. On the Upswing is sQ!'s first album, and on it, the group paints some moody pictures, but each is hazy on the details.

The group's greatest strength is creating an atmosphere that envelops the listener. Well-textured arrangements, creative percussion sounds, and healthy reverb create a sense of tension and suspense that feels rich and mature. The group's arrangers use active voice parts, dynamic syllables, and widely spread chords to keep songs on edge. The good arranging deserves a solid 4.0 out of 5. The problem is execution of the details.

It seems that at any given time, two background singers are out of pitch — one sharp and one flat. The women seem to be chronically out of tune in some very obvious sonic places (the hook of No More "I Love You's"; the choruses of Come Undone; the verses of Come On Over). The women are often badly balanced and blend poorly. Widely-spread chords worsen many of these pitch problems, instantly drawing the ear to the top. Clashing pitches really hurt blend, not to mention the chords. Some of the early chords in No More I Love Yous were so destroyed that they sounded like the horn on a freight train in the distance. Though the tenors and baritones are often held back in the mix, they're guilty of some pitch inaccuracy, too (Motown Philly).

The solo performances are inconsistent. The warm and womanly soloist on All You Want wears her heart on her sleeve, while the strident soulstress on Think belts out some serious energy. The guys on Demons pack some despair into the song, along with some flat pitches. Most of the remaining soloists fail to capitalize on the moodiness of the arrangements, especially the last four.

I liked what I heard from the percussionists and basses. The VP sounds really add to the atmosphere of each song. Drum kit sounds are unique in each song; the rhythmic patterns are insightful, and the tempo is consistent. Some of the percussion sounds were tight enough to make me wonder if sQ! sampled and sequenced (Two Steps; Demons; Motown Philly). Though sometimes lacking syllabic punch, the bass lines were on pitch, active, and well-EQ'ed.

Generally good studio work puts a polished sound on otherwise rough songs. The panning and deliberately bad EQ on the spoken parts of Come On Over is cool. A generous ladeling of reverb and some delay enrich already well-textured arrangements.

There are things to like about On the Upswing. It's impressive how well sQ! creates moods on this album. The group should emphasize intonation in rehearsal (or use an intonator in the studio!) and do some singing in stairwells to see if their soloists can pour out as much feeling as their arrangers.

According to their website, Tufts sQ! has been around since 1994. One would expect a somewhat experienced sound. Yet, surprisingly, this is the group's first album, and it's characterized by the problems and shortcomings of a typical college group's early efforts.

Overall, On the Upswing is less than memorable. The album made me wonder why Tufts sQ! has an exclamation point permanently stuck in their name; it's awfully misleading. The songs plod along and then end uneventfully, with little accomplished in between. The lack of energy and dynamics on this disc is staggering. Perhaps this is due to a lack of things to be excited ABOUT — which brings me to my biggest, most underlined, most important-est piece of advice for sQ! (or any other group attempting to improve their sound): it is the job of the musical director to create musical moments in the arrangements and to spend time on dynamics. These qualities are the basic elements of good musicality. There may not have been many mistakes, per se, on On the Upswing, but there also aren't many beautiful spots for a listener to look forward to, or reminders of why we like listening to a cappella in the first place.

A few soloists are appropriate and enjoyable and nearly carry their respective tunes on their backs. Dave Rosen's voice fits Two Step very well, as does Jeff Wong's on Everywhere You Go. I gave the lowest individual song scores to tunes in which I felt the soloists simply did not have the necessary skills to invite a favorable comparison to the original artist. Christina, Aretha, Boyz II Men? Hm. Biting off more than they can chew?

On the Upswing will serve as a fantastic yearbook for the members of Tufts sQ!, but is not a viable product for the discerning a cappella listener.

To order this album, visit the album's webpage at Mainely A Cappella.