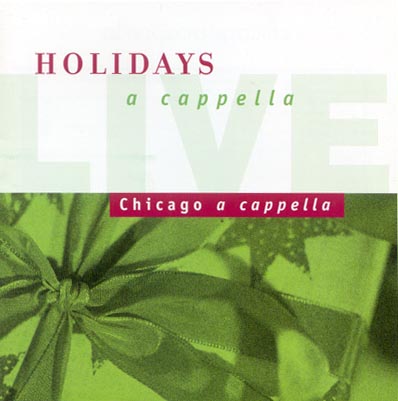 I think it's safe to say that Chicago A Cappella's latest release, Holidays A Cappella Live, is not your average everyday holiday album. Whether that makes it more or less desirable as an addition to your library will very much depend on what sort of music you like to enjoy come the holidays.

If you're a modern-day traditionalist, looking for Jingle Bell Rock, Santa Claus Is Coming to Town, or even the more solemn standards such as Silent Night or White Christmas, you won't find them here. If you're Jewish and expecting the Marcello Maoz Tsur or the usual Al Hanisim, look elsewhere. You're better off ordering your Christmas and Chanukah classics from K-Tel.

But if you've been looking to expand your definition of holiday music beyond English, Latin, Hebrew and Yiddish to include works in Icelandic, Ukrainian, Swedish, and Sanskrit, this is the album you've been waiting for. To call this album eclectic might actually be an understatement.

Frankly, an album showcasing such (arguably) esoteric repertoire also makes reviewing a much more difficult task. Since a great deal of the music is new to me, I found myself actively resisting the temptation to give as much weight to the music itself as to its performance. Putting aside my opinions of the compositions, the "live" nature of the recording makes the performance itself even more difficult to assess, since one should perhaps be a bit forgiving of ambient noise and tiny vocal miscues, given that there is no studio trickery at work and no opportunity for a second take.

That said, it's to Chicago A Cappella's credit that the need to make such allowances is, for the most part, rendered unnecessary by fabulous intonation, blend, dynamics and energy. Truth be told, I can't say that I loved all of their selections. Some go on a bit long and become repetitive; some are just not my particular style. And this certainly is not a CD you're going to throw on as background music for your office Christmas party or show off to your relatives visiting for the holidays as a hip example of modern a cappella (stick to Voices Only: Christmas for that sort of thing).

But there can be no question that this nonet of singers is incredibly gifted. Having grown upon on The King's Singers, the comparison for me was inevitable. Sure, this group has three extra people, and they're a mixed group (vs. the all-male KS), but the enthusiasm with which they approach music of all languages and cultures and the precision and musicality that they bring to their performance of said music puts them, if not quite on the same level, then pretty darn close.

I really wish I could give this one an unqualified recommendation. The singing on this album is some of the best I've ever heard. I couldn't believe Chicago A Cappella only has nine members; the group has a full, rich sound befitting a choir five times its size. Combine that with a fantastic, diverse repertoire and a wonderful feel for how to shape a musical phrase, and the result should be sheer magic.

What's the problem then? Holidays A Cappella Live is one of the noisiest, most poorly recorded live albums I've ever heard. The CDs from my high school choir concerts sound better than this. Crying babies? Check. Ambient hiss? Yup. Passing cars? You bet. Awkward, abrupt fades at the beginning and end of each track exacerbate the recording issues. To be fair, director/bass Jonathan Miller places a disclaimer in the liner notes to this effect, but the fact that he's honest about it doesn't make it any less annoying, and anyway, he's wrong. Maybe you can't get rid of every little background noise, but the coughs shouldn't be louder than the singing.

But enough about that. The liner notes brag, "With equal conviction and style, the group communicates the purity of early music, the passion of spirituals, and the intricacies of vocal jazz.". For most classical choirs, this statement would set the listener up for disaster. But, astonishingly enough, Chicago A Cappella actually is equally comfortable in all these styles. Highlights include Morton Lauridsen's heartstopping O Magnum Mysterium, former King's Singer Bob Chilcott's delightfully weird Christmas Day 1666, and five spirituals whose stunning arrangements are paired with beautifully authentic renditions.

As a Jew, I must give special props to the group for its selection of Chanukah music, which makes up a respectable five out of the album's 23 tracks. As Adam Sandler said, "There's a lot of Christmas songs out there, but not too many Chanukah songs", and the token Chanukah songs most groups throw onto their Christmas CDs are boring and overdone. The Chanukah standards on this disc are arranged in fresh and surprising ways, and Robert Appelbaum's Funky Dreidl is riotously enjoyable.

The only questionable repertoire choice is Vanraj Bhatia's Hemant, which attempts to condense four rag-based improvisations into a single choral piece. "The effect resembles a four-voiced soloist, singing with sitar and tabla", read the liner notes. Um, no, it doesn't. It resembles an incoherent mess. There's a reason Hindustani classical music doesn't contain any harmony. Considering that the (admittedly beautiful) Sanskrit text has nothing to do with any holidays — it's about an old woman suffering through winter's bitter cold — I really wonder why this is on here.

I have to mention the golden voice of Elizabeth Grizzell, who is featured twice. She brings a wonderfully pure tone to the simple Irish carol Wexford Lullaby, and her turn on Have Yourself a Merry Little Christmas will bring tears.

In short, despite the poor sound, Holidays A Cappella Live would make a fine addition to the CD changer for the holiday season, as long as the volume isn't turned up too high. When deciding on track scores, I rated each piece solely on musical merit, then deducted a point from each one on which the recording bothered me. The fact that all but two tracks still got 3s or better indicates just how good this group is.

My advice to Chicago A Cappella? Fire your sound guy. You're doing everything else right.

Chicago A Cappella is an impressive choral ensemble, and I strongly recommend their album Holidays A Cappella Live for any choral music fan. Though their lineup consists of only nine singers (two sopranos, two mezzo-sopranos, two tenors, two baritones, and one bass), they are often capable of sounding like a group twice their size. Their repertoire is eclectic and diverse, which many listeners will find refreshing and enlightening. Few choral albums can rival the range of languages heard here; there's music from the English, Icelandic, Swedish, French, German, Ukrainian, African-American, Hindu, and Jewish traditions. Despite such an extensive linguistic and stylistic range, Chicago A Cappella manages not to spread itself too thin, and is up to just about any challenge.

OK, bad news first. The only drawbacks to this album? Probably not anything that hasn't plagued the majority of choral recordings out there. First, like most live recordings, the range of sound is annoyingly wide. The soft moments are too soft and the loud moments are too loud. At a live performance, this is exactly what you want, but on disc, it's a pain to have to ride the volume button. Second, the blend consistently suffers due to conspicuous soprano voices. Conversely, their lone bass (director Jonathan Miller) isn't loud enough throughout. Perhaps the addition of a second bass singer could kill two birds?

Lastly, though overall this is a remarkably professional and well-sung album, Holidays A Cappella Live includes two performances that miss their mark. Whether or not listeners appreciate the difficulty of Hemant, most are sure to be turned off by this piece, which attempts to create a "sitar" sound. The group doesn't quite get the instrumental riffs right, resulting in a performance far sloppier than those heard elsewhere on this disc. Funky Dreidl was more "funky" in the sense of the word referring to "stinky" or "smelly" than the intended rhythmic meaning. Fortunately (or sadly, depending), most choral music fans probably won't notice or care about the squareness of a choral attempt at funkiness.

Despite the above, the solid and well-honed singing on this album reflects well on Director Jonathan Miller. Not only is he an undeniably talented leader and director, his works Shehecheyanu and Coventry Carol prove his skill as a fantastic arranger, as well. Miller's tracks were lively and creative, and hopefully their next disc will include more of his arrangements.

Fans of Morten Lauridsen's O Magnum Mysterium especially should pick up this disc. According to the liner notes, Chicago A Cappella "gave the Chicago premiere of this piece in 1995". After hearing their take on this disc, I can understand why it became the "bestselling choral work of the decade". I expect to be listening to this track repeatedly in weeks to come.

Another track deserving of multiple-multiple spins was the gorgeous, haunting Icelandic piece Immanúel oss í nátt. The group's blend and seemingly effortless command of the moving lines were chill-inducing. The song itself reminded me of the bold choral music one hears in films during poignant or significant moments. A truly winning track.

This is an album I plan to stick on my holiday gift list for next December (or November, if I'm REALLY on top of things — which is highly doubtful). It's a fitting replacement for every one of those compilation discs full of generic, commercialized holiday drivel.