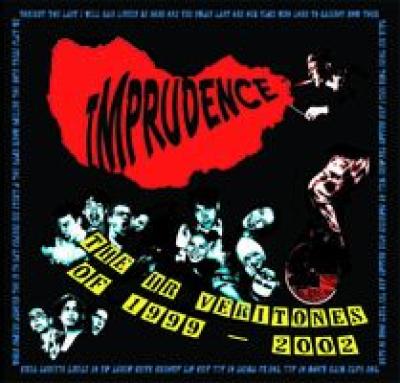 The Hardvard-Radcliffe Veritones have collected their best from the last three years and made a clean, unaffected, no-frills release in Imprudence. For all those craving unadorned-yet-modern mixed collegiate a cappella, The Veritones deliver.

Listeners accustomed to the studio-slick, in-your-face sound of collegiate groups like The Mendicants are in for a shock. The Veritones have released a recording that sounds more like a great rehearsal or show.

Consider how often RARB reviewers praise recordings while simultaneously wondering how the group "actually" sounds. Outstanding groups like The Nylons and Blue Jupiter add extra harmonies, percussion, and multing (the process of making a line sound richer by having multiple takes playing at once), not to mention endless effects, to help achieve a "full" sound in the studio. Listeners judge the recording not as a strictly accurate representation of the group, but as a finished product.

The Veritones, by contrast, don't ask you to "pay no attention to the man behind the curtain". They're not perfect, and they don't use studio trickery to make you think they are. They're talented and well-rehearsed. They put that on the line and, for the most part, it works.

The proof is really in the fact that The Veritones' live and studio tracks are practically indistinguishable from one another. Only the thunderous applause at the end reveals a track's true identity.

Blend and dynamics are excellent throughout. Tuning is good but takes minor hits. Only a few clunkers actually distract. The soloists are nearly all believable, youthful and surprisingly subtle in their phrasing. And what's more, they sound like they belong together, track by track.

Other than the title, I doubt you'll find much Imprudence on this fine and very "real" collegiate release.

The Harvard-Radcliffe Veritones have put out an album featuring the Veritones of 1999-2002. The album art is a kitchsy horror motif that belies the serious tux-and-black-dress photos from the group's shows. The album is best left to the friends and family of The Veritones. Though there are a few bright spots on Imprudence, it probably isn't worth it for the average a cappella collector to get this album.

The songs are contemporary with a few standard covers like Walking in Memphis and With or Without You. There is one original number, written, arranged, and performed by Trajan McGill, who was definitely born in the wrong decade. The song could be Gershwin, or maybe Cole Porter, and Trajan sounds like a mix of Fred Astaire and Bing Crosby. It is a fun number, but goes too low for Trajan.

Overall, the arrangements are kind of simple and hollow, and the group is very top-heavy. The bright spots on Imprudence involve Annie Tigani and her solos on Winter and Both Hands, which are just lovely. The backgrounds are quite pleasing too; it is just the overpowering soprano line that needs to be lowered in the mix. There were other solid soloists (tracks 1, 6, 8, 13), but they were plagued by a bit of the musical theater bug that haunts college a cappella.

The album is poorly mastered as well — I had to adjust the volume a lot to hear parts of the songs, and then had to turn it way down on other parts. This is a simple production detail that can be taken care of in mastering.

The group definitely has potential, but they need to find a style that fits their voices better, create fuller-sounding arrangements, and pay for a good engineer and studio!

Judging from past reviews (I haven't heard it), Imprudence is a vast improvement over The Veritones' previous album, Vertigo. Bland production and bland-er song choices, however, make it nothing more than a very good yearbook CD.

The Veritones are an impressively tight group, and they sing with a ton of energy. They handle complex cross-rhythms with aplomb, most notably on Babylon, a track that would have received a 5 if soloist Karl Huth weren't trying so hard to sound like David Gray. They stay nicely in tune with what sounds like a minimum of electronic enhancement, and they shape their phrases beautifully. Their arrangements make good use of the range of talent they have available to them; check out that insanely high soprano on With or Without You.

Soloists range from good to excellent. The best of the bunch is Annie Tigani, who appears to have kicked butt with a show tune on Vertigo. If this is true, she is quite a versatile singer, because the tracks on which she shines here are by Ani DiFranco (Both Hands) and Tori Amos (Winter), two artists who are about as far from Broadway as you can get. Other highlights are Jaime Leifer on Calling You, Scott Fruhan on Walking in Memphis, and Tom Lowe on High and Dry (where do they find all these wailin' guys?).

There's only one real stinker of a track on Imprudence. Stay, a dreadful song to begin with, is made worse here by an awkward stab at using Off the Beat syllables (zhoom-zhop-zhu-wanna?) and rhythmic integrity that is not up to The Veritones' usual standard.

The main problem with this album is that the repertoire is boring. There's not a single song on here that I haven't heard sung by another college group, and songs like Surrounded and Walking in Memphis are so overdone that they ought to be banned.

Production is not so much problematic as merely pedestrian. The studio tracks and the live tracks sound basically identical (which could either be a criticism or a compliment, depending on your point of view). The vocal percussion, decent but not amazing and mostly by Frank Farach, is mixed far too low. Rather than driving the arrangements, it is just another part of the texture.

I would be remiss not to mention Trajan McGill's original song, The Harmony We've Known, which is the polar opposite of the typical collegiate original. Rather than try to sound like REM, McGill has attempted to write the next great American standard. It has an appealing stereotypical-Ivy-League-ascots-'n-tweeds vibe, and it sounds like something The Whiffenpoofs or Krokodiloes might have been singing 50 years ago. The trouble is that it isn't very good; it lacks the memorable melodies of Gershwin and Porter, and the arrangement is pretty weak. But it's the only instance on the album of The Veritones attempting to do something different, and thus it deserves credit. (Besides, McGill's droll delivery is priceless.)

A cappella purists, put off by the plugged-in sound most college groups are going for these days, might want to pick up a copy of this album; it's a fine specimen of a dying breed. Friends, family, and fans of the group will not be disappointed either. Those who don't fall into any of the above categories should probably take a pass on Imprudence.

To order a copy of Imprudence, visit the group web page or contact the group directly at veritone@hcs.harvard.edu.