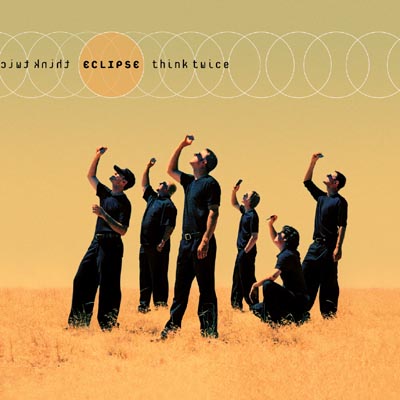 Eclipse is back with Think Twice, an album that, shall we say, eclipses their previous release. Advice to those who never make it to the end of these reviews: Buy this album, because it is fabulous.

There is no need for these guys to do covers (though they do them quite well — I especially like My Maria). The eight originals are catchy, interesting, and radio-worthy. The arrangements are tight and peformed with great precision. These guys handle complex harmonies with ease and have a smooth blend that is a pleasure to hear.

The six men of Eclipse are young, hip, and talented. They use production without production using them, and their percussion is awesome. Then, in Hard Times Come Again No More, they drop the percussion and production and show they can do it simply with their naked voices. Watch out, Rockapella!

These guys hardly need tips, but I've got a few for their next album, which could be truly transcendent:

But to those of you who missed it the first time around: Buy this album, because it is fabulous.

Eclipse is back with another solid and engaging album. Fans of the group will be pleased to note they have lost none of their boundless energy, clear and bright sound, or rockin' soloists. Indeed, the pure singing talent of these six guys is phenomenal. Beyond energetic and balanced blocks, Eclipse showcases their abilities by trading solos between their members throughout the disc. On the pure singing level, Eclipse is absolutely among the best out there.

Where the creative and rockin' covers took center stage on Once, it is Eclipse's pop originals that dominate Think Twice. Though Patrick Rose continues to take creative leadership, it was refreshing to see contributions from the other group members among the writing credits. Disappointingly, the covers here failed to capture the energy and innovation of Once's tracks like King of Pain or All My Life (although the harmonies on Hard Times Come Again No More were lovely). The catchiest originals on this album are Live It On Up or Pouring Rain, both of which showcase these songwriters at their finest. As with their previous album, the group favors a fun, slightly sappy pop style with R&B undertones; the lyrics can get cheesy at times, but the infectious energy that defines the Eclipse sound usually manages to sell the song anyway.

Think Twice is neither a step forward nor backward for Eclipse, but instead another notch in the belt of a rapidly rising career (marked by recent performances at the Salt Lake City Olympics). For me, the loss of the highly distinct covers from Once was largely balanced by improved songwriting on the originals; the excellence in production and sound remained constant on both albums. I particularly look forward to seeing how some promising songwriters here grow as the group moves on to their next project. Those exploring this talented sextet for the first time ought to choose their initial album according to their tastes, but previous Eclipse fans should be sure to add this strong effort to their playlists.

Why aren't these guys better known? Sure, they performed at the Salt Lake City Olympics, but they certainly haven't achieved the prominence of groups like Rockapella and Ball in the House. I suspect they will soon, though, because this disc is fantastic.

What stands out most is the songwriting. It's pure pop, but it's intelligent, well-crafted pop that's far more interesting than your average radio-friendly boy-band fare. Once they've come up with a killer hook, they don't just recycle it through a song; they continually vary and adapt it. Listen to the way the intro on Pouring Rain returns between verses: the chord changes are the same, but the melody is new. There is no lazy songwriting or arranging on this disc, and that's more than can be said about most albums out there. Specific highlights? Hard to say, but the title track has a superb, unusual bridge; Keep Pushin' On has an appealing Edwin McCain flavor; Pouring Rain is utterly gorgeous; and My Maria is irresistible. Their cover of Owner of a Lonely Heart is nicely rendered with a creative arrangement that's a little darker than Yes's version.

Kevin Jones's vocal percussion also deserves mention; quite simply, it rocks. I was especially impressed by the thundering toms on Pouring Rain and the well-placed scratches on Owner of a Lonely Heart.

The production is first-rate as well. The whole disc has a dirty, overdriven sound that works well for Eclipse's style of music. Owner of a Lonely Heart is a textbook example of how to use the infamous "Cher effect" with taste and restraint. And My Maria is the first time I've ever heard voices convincingly manipulated to sound like pizzicato strings. Interesting. The album contains a lot of effects, but nothing is processed to the point that it no longer sounds vocal.

It's only on albums this good that I can indulge in my favorite hobby — nitpicking. (You should take this as an honor, guys.) On Owner of a Lonely Heart, first tenor Paul Hansen hits the second B-flat above middle C. I'm surprised the group's arrangements don't take advantage of his large range more often; too often, too many voices are crammed into too small a space, causing muddy chords. They'd be well advised to open up their chord voicings a bit. Live It On Up is a weak opener; it's a good track, but not nearly as engaging as some of the other songs on Think Twice. The modulation from the verse to the chorus on Heaven's Eyes (from D major to F-sharp major, in case you're curious) is abrupt and awkward and doesn't work, but any memory of it is erased by the stunning, unexpected chord on the words "by my side" just a few seconds later. And Hard Times Come Again No More, a beautiful, album-closing arrangement of a Stephen Foster chestnut, would have benefited from a less produced, less Auto-Tuned sound than they used on the rest of the disc.

Buy this album now, and watch out for Eclipse.