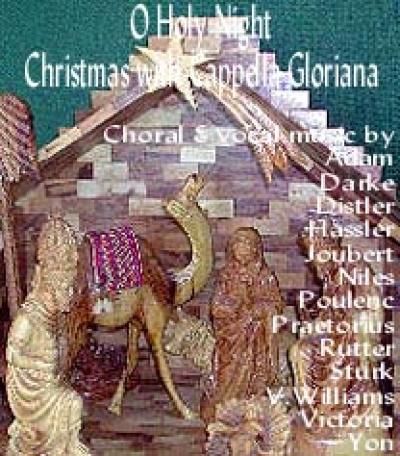 O Holy Night is uniformly very good. It includes many of the most-performed and most-recorded classical and traditional Christmas music (for standards and modern carols one needs to look elsewhere), and would be a good addition to any collection, a cappella or not.

Singing as a group, the group sounds great. Good blend, a good recording space adding just enough echo for depth and richness, good tempo. Deck the Hall hits all the right notes, literally and figuratively. Instruments, when employed, are well balanced against the voices.

The naked voices seem a bit less practiced, the men worse than the women. (Witness the alternating interludes in All This Time; an exception to this rule is the lead on I Wonder As I Wander, a delight.) A surprising number of tracks feature only a single voice. Ríu, Ríu Chíu is too languorous to begin with, and whenever the male soloist sings, he seems a bit uncomfortable with the syllables. The coloraturish lead on O Holy Night has a wonderful high range and great feeling, but falters a bit in the lower notes and is perhaps not compelling enough for six-plus minutes.

All told, this is a very good album worth adding to one's Christmas collection. Like all such albums, it loses a point for repeat listenability.

Cappella Gloriana offers nearly an hour of holiday atmosphere on O Holy Night: Christmas with Cappella Gloriana. The mixed ensemble is strong throughout a challenging and interesting set list that ranges from familiar carols to less well-known sacred works. They don't have the technical perfection or crystalline soloists of the very best vocal ensembles (Chanticleer comes to mind), but every track is enjoyable nonetheless.

The album was recorded live in three California churches, resulting in a wet and distant sound. Occasionally (In the Bleak Midwinter) I got the sense that I had arrived at the concert late and had to take a seat in the far back corner of the church. The intense echo doesn't serve some songs well; I lost much of the diction on Ríu, Ríu Chíu. The keyboard accompaniment featured on five tracks also sounds rather remote.

On the other hand, the live, churchy sound adds greatly to the mistletoe-and-snowflakes feel of the CD. I reviewed the album in March, at the tail end of a freezing Chicago winter, and it positively made me nostalgic for snow. I wanted to curl up on the couch in a flannel nightgown before a warm fireplace hung with stockings ... and I'm Jewish.

My only complaint is that the CD comes in a sleeve without liner notes of any kind. Lyrics and translations would have helped me appreciate these songs more, especially since half of them are not in English.

O Holy Night isn't the kind of stellar holiday CD I'd play in July just to savor it musically. But if you're seeking a sophisticated accompaniment for your next Christmas party, Cappella Gloriana is a reliable choice.

Cappella Gloriana tries to cover all its bases on O Holy Night. The group was founded in 1996 "for the purpose of performing the finest and most demanding works in the choral repertoire from the Tudor period to the present day". It includes music by composers from the 16th century all the way up to today, but it's a long stretch to call it the finest and most demanding out there. Typical of most semi-professional ensembles, the group tries to cover too much ground and please too many people.

The album comes across as a recording of a live performance put together for the casual listener — a well-known opener, plenty of recognizable and accessible material from the last 500 years, a few pieces to "challenge the audience", more recognizable and accessible songs from the last 500 years, and eventually a rousing, crowd-pleasing closer. This format works well in concert when performing for a live, general audience. But as a recorded venture, it falls short. The familiar material isn't performed well enough to make one's hair stand on end in rapt attention. And there isn't enough music that pushes beyond the boundaries of what a general audience might expect to really hold a musician's focus.

Only four of the twenty pieces qualify as anything challenging or demanding. Poulenc's O Magnum Mysterium stands out not only because of the genius of the composer, but also because of a musical, spirited performance from the ensemble. This challenge of a piece is followed by three rhythmically interesting songs by Poulenc (Quem Vidistis Pastores Dicite, Videntes Stellam, and Hodie Christus Natus Est). While the performances of these three are haggard, the inherent rhythmic vitality of each draws my ear closer and holds my attention better than the "safe" repertoire of the rest of the album.

Especially bothersome is the group's account of choral music from before 1650 — the Spanish Ríu, Ríu Chíu, Victoria's O Magnum Mysterium, Hassler's Dixit Maria, and Praetorius's Psallite. Individual melodic lines get lost in the overly vertical, plodding interpretation. The text in early choral music is paramount, and phrasing should follow the stresses of the language. But Cappella Gloriana can't escape the evil editors' inevitable insertion of bar lines, contributing to a wooden, square performance.

Problems with tuning, intonation, or blend occur with some regularity, often the result of a lack of vowel unification. It's not surprising that these problems exist in a semi-professional ensemble. It's hard to do it right. There's a reason why there are so few groups with the stunning musicality of The Cambridge Singers or the tremendous talent and adventuresome spirit of The Dale Warland Singers.

I'd go see Cappella Gloriana live. And after the concert, I might even buy their CD, because I believe it's important to support independent and semi-professional musicians. But this recording just doesn't go far enough in terms of quality or risk-taking to warrant a general recommendation.

To order, send a request to: