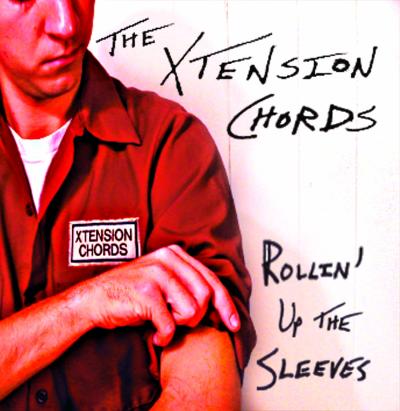 I don't know quite what to make of this album. I didn't think it was a great album the first time I heard it, and I'm not convinced that it's a great album now. But the more I listen to it, I grow ever more certain that it's not a bad album. That means it must be pretty good, eh?

Backwards derivation seems to be the best way into this latest effort by The Xtension Chords. The best songs weren't necessarily my favorites — or rather, my favorites were clearly not the best songs — but the CD's got a lot going for it. To put it in relative terms, this disc is clearly better than The Brown Derbies' Hybrid. If you liked that a lot, you'll like this one even better. There's a conclusion for you.

I liked Your Body Is a Wonderland the best. The arrangement is terrific, the execution is great, and the soloist has a wimpy voice. Don't get me wrong, I like listening to him sing the song a lot, and I think he totally works. But I also think he has a wimpy voice. Also, I gotta give a shout out to the tenors here. As an ensemble, they outdo themselves here, avoiding the pitchy strain that plagues them on other songs.

I liked the Barry White cover Practice What You Preach, even though it's kinda out of tune. I don't like Journey, but I feel compelled to give high marks to Open Arms because good tenor soloists are hard to find. I am sick of hearing men's groups cover Lazy Boy, so it did not enjoy the same level of grade inflation. But I pushed Nothing Lasts Forever up to a 5 because they wrote it themselves. They do a good job and all, but if it were a cover, it would get only a high 4.

Illinois, the school song, is really pretty, and I liked it. But it's out of tune, so I can't give it as high a score as I would like. I also can't give a special score to the energy and vocal percussion on Two Princes, which was great even if the song as a whole didn't spark raptures. The last two songs on the disc both had flaws in my eyes — Back To You was boring and had some small tuning issues, Carmen Sandiego had bigger tuning issues amid its gutsiness — but accumulated good vibes propelled them up into the 4 range.

In short, I don't know what to make of this album, other than a lot of double-barreled sentences and too many first-person pronouns. It's pretty good though. Maybe you should get one and make your mind up for yourself.

In a letter sent to reviewers with The Xtension Chords' latest CD Rollin' Up The Sleeves, director Scott Malinowksi wrote, "we drove ourselves toward ambitious musical goals, and in so doing, the joy we feel for this music pervades every aspect of this recording". Pretty heady stuff, I thought. Then, in the album's liner notes, the group writes, "The passion and respect we hold for this music resonates from every harmony, permeates every aspect of this record.". Geez, this is a group that I've typically known as equal parts comedy and musicianship (often in that order). I thought perhaps they'd decided to record a Marshall Bartholomew tribute album. Yikes!

Then you watch the movie.

I won't dare spoil it for those who will ultimately pick up this album, and granted, it has little place in a music review, but kudos to the aforementioned Scott for a very funny and very creative bonus that puts my mind at ease that The Chords haven't lost their comedic flair.

That said, this album is very much aptly named, as The Chords did indeed "roll up their sleeves" to focus primarily on the music, and in so doing, they have produced the best of their recent albums. Unlike previous efforts, there are no parodies to be found, although there are nicely incorporated musical allusions now and again, including the very appropriate Motown Philly riff in the cookin' opening track, Boyz II Men's Thank You. And what's more, there is some truly exquisite ensemble singing, especially evident in tracks featuring little or no vocal percussion, such as Open Arms and Right Here Waiting. Same goes for Illinois, which is one of the odder arrangements of a state song I've ever heard, but I guess if you're going to do a traditional song on a pop album, might as well do an arrangement that stands out.

A word about the Journey and Richard Marx covers mentioned above: I can honestly recommend buying this album if only to hear Chris Quidlat's solos on both. I was as skeptical as anyone going in, especially on the Journey cover, since few people short of Scott Leonard have the chops to handle Steve Perry. But wow! It's just…wow! I can't say I've had a chance to hear the other three nominees in the best male collegiate solo category for this year's CARAs, but if I had to vote right now, Chris wins hands down.

Also worthy of mention is Jeff Grider's arrangement and Tom Forde's gutsy performance of the Barry White cover Practice What You Preach — a ballsy move given the low-end range needed to replicate the resonant Mr. White and the overall soul/funk feel which might not seem like a natural feel for these guys. It is to their credit, then, that they pull it off with flying colors. For those who participated in a recent discussion on the RARB message boards regarding good bass solos, here's one that seems to have been overlooked and if Jeff is willing to share it, other groups might enjoy giving their bass a chance to shine with this solid arrangement.

Truth be told, the album is not without its missteps. There are subtle rhythm problems between the VP and the background voices on a number of tracks and some scattered tuning issues now and again. Also, while the group's co-producer/engineer Freddie Feldman has done a masterful job for the most part — especially in creating noticeably song-specific vocal processing and mixes (I'm oversimplifying, but the ballads are kept very "wet" and the uptempos are recognizably crisper) — there remained quite a few places where the solo crept back too far into the blend and risked being drowned out. Lastly, song selection, especially on the second half of the album seemed a tad misguided — the above-referenced Illinois, the umpteenth version of Spin Doctors' Two Princes, the album's second John Mayer song Back to You, and an admirable (both for its similarities and its willingness to revise) but ultimately unnecessary cover of Where in the World Is Carmen Sandiego?.

But none of that should be enough to dissuade from picking up this album. The music itself is excellent, Chris's solos will blow you away, and heck, it's worth it just for the movie! I say buy it, convert tracks 1, 3, 4, 5, 7 and 10 into mp3's, load up your iPod and off ya go.

The Xtension Chords' Rollin' Up the Sleeves is a good album that should have been great. Their singing is fantastic and their arrangements mostly solid, but illogical song sequencing and poor mixing hold back the final product.

First, the good. Screaming high tenor Chris Quidlat has the most stunning voice I've yet heard on an album I've reviewed for RARB, and he merits every note of his three solos. Steve Perry is one of the best singers in rock, but Quidlat's turn on Journey's Open Arms is every bit as good as the original. (Quidlat was no doubt helped by arranger Heath Morber's wise decision to present the song as a percussion-less, choral ballad instead of as overwrought power rock.) He also does a fabulous Scott Leonard impression on Where in the World Is Carmen Sandiego?. Right Here Waiting is a nauseatingly awful song that I doubt any singer could save, but Quidlat does his best with it. At the other end of the bass clef, Tom Forde sings the hell out of Barry White's Practice What You Preach, a great repertoire choice (The ladies must go wild for this song!). Actually, none of the soloists are anything less than superb.

The Xtension Chords' arrangements are consistently good, with only the overly simple Two Princes and I Saw Her Standing There disappointing. Like most collegiate originals, Barry Horwitz's Nothing Lasts Forever sounds like something by Edwin McCain or The Goo Goo Dolls, but it has a memorable hook and nice harmonies and is one of the better originals I've heard from a college group.

Now, the bad. My most serious issues are with the production. The whole album just sounds grating, as though engineer and former RARBer Freddie Feldman took the most irritating hi-mid frequency he could find and turned it all the way up on every track. (This is a problem I've noticed on other tracks he’s worked on.) The album producers flagrantly abused the AutoTune plugin throughout (e.g. on Nothing Lasts Forever and I Saw Her Standing There). I would bet that if these soloists had sung a few more takes, they would have been able to nail every note, and not have to have all the humanity electronically drained from their voices. And sampled percussion can be a wonderful thing, but not if it SOUNDS sampled. The lightning-fast snare fill that opens Two Princes should have been done live; here a bunch of snare hits are simply placed really close to each other, and it's wholly unconvincing. That said, the producers do make some good decisions, such as letting the group's energy drive the "dum-ba-digga-dum" chords on Nothing Lasts Forever instead of drowning them in distortion as on The Chords' earlier Inside Out, the worst track ever to appear on a BOCA CD.

Also, why put the two weakest tracks first and last? Although I appreciate that they wrote actual arrangements of these originally a cappella songs (the changes are subtle, but they make a difference) instead of transcribing them note-for-note, both tracks suffer from the same problem, a failure to get into the groove of the song. Since no other song has that handicap, these two should have been hidden in the middle of the album. In general this disc doesn't hold up well as a whole; it's possible to pull off a CD this diverse, but one must be exceedingly careful with track sequencing. Here the song-to-song contrasts are too jarring.

As far as I can tell, The Xtension Chords are an excellent group. Rollin' up the Sleeves is a fine album, but they deserve better.

[Editors' note: This review was revised because of incorrect assumptions leading to misleading statements in the original review. We apologize for the previous inaccuracy.]