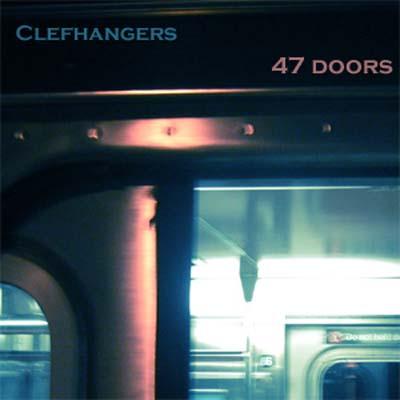 The Clefhangers are a mixed group from Columbia University, and 47 Doors is their latest release. The album begins with several amazing tracks, and then slowly begins to deteriorate. At the opening chords of Bring Me to Life, I was transported by the beauty of their music. The soloist was channeling the girl from Evanescence. They had wisely put the annoying talking by the guy low in the mix. Awesome production and arrangement. It was so good I wasn't thinking about any technical issues; I just enjoyed. I doubt any of the many who I'm sure will be covering this song can do a better job. See you guys on BOCA.

Then came A Woman's Worth. Again, beautiful arrangement, blend, everything. I wished the soloist would belt a little more, but she has great control over her voice. Mysterious Ways faltered a bit. It has a grating intro, but the verses are awesome — great soloist. But it doesn't hit when it is supposed to in the choruses. I wanted a blast of sound, and I got a feeble whimper. Cowboy Take Me Away suffers from a boring arrangement, but has a great soloist.

Their version of Sarah MacLachlan's Ice Cream takes the sweet song and converts it into a minor dirge, a very interesting take on an old, oft-covered song. The medley of Ray of Light and Elevation would have been better as two separate songs. Each song alone has a nice energy, but I wish the soloists were higher in the mix.

The next few soloists aren't so great. On Sexual Healing, the second soloist should have performed the entire song. The first soloist is shaky on pitch, and it pained me to get through his solo to the good one. On Gone, the soloist is trying a bit too hard to sound like Justin Timberlake and lacks control. This kind of song has to be carried by the soloist — and it isn't. On Complicated, the voice is just too thin.

Then we come back to Jean Perlman from Track 1. She has a gorgeous voice — she reminds me of the soprano from Vox One.

Jonathan Spring. He was the brain behind this album. He engineered, edited, mixed, percussed, and arranged almost professionally. The first track could have been mixed by Gabe Rutman. While he contributes a nice solo on spiralmouth's Even Though, his strongest talents are in the behind-the-scenes magic that makes an album better than good. Kudos to him. And kudos to his album. Though there are some missteps, Track 1 alone makes 47 Doors worth the purchase.

It's great to hear such good progress from the Cleffhangers. Their previous disc, Abandoned Studio, left me wanting more involvement in the music without losing the precision that permeated the album. On 47 Doors, the group has turned out 12 tracks that are more convincing and enjoyable while maintaining a clean sound. They still have problems bringing all of their strengths to the table on every track, but the overall result is a nice big step forward for them.

Not only have the backgrounds stepped up their energy and commitment, but the soloists have kicked things up a notch as well. While there were no real standouts on Abandoned Studio, there are many noteworthy performances on 47 Doors. Jean Perlman has great energy on the disc's opener, and then graces the latter part of the disc with a beautifully performed version of What a Wonderful World. Ted Malawer has great control and soul on *NSYNC's Gone, and the Ray of Light/Elevation mix is saved from over-sweetness by a rocking solo from Cengiz Atasoy.

When a track has a weakness, it's more than likely that it will be balanced out by a more notable strength. There isn't a simple formula for the group's strengths and weaknesses; the lead on Gone provides enough soul to make up for the background's somewhat staid performance, while it's the background on A Woman's Worth that really engages me. I already mentioned the good energy from Cengiz Atasoy on the U2/Madonna mix. Mysterious Ways has a weird arrangement that doesn't harness the energy of the original, but the group still turns in a solid performance that raises the track above its arrangement. Although Sexual Healing probably shouldn't have been put on the disc due to weak soloists, the background still sounds pretty good.

The pacing of the disc is well-planned, starting with a rocking opener, bolstering the middle of the disc with Gone and a reinvented version of Sarah Mclachlan's Ice Cream, and ending with well-performed mellow tunes sandwiching a confident cover of spiralmouth's Even Though. I feel like I'd be quite delinquent if I did not give a lot of credit to Jonathan Spring, the producer, primary engineer, mixer, and percussionist of the disc. He also penned 5 of the 12 arrangements and solos on Even Though. A motivated and talented force like that is a boon to any group.

47 Doors shows a lot of growth from the Clefhangers. I am excited to see what they come up with next time.

I'm glad to see another collegiate a cappella group taking on the task of primary engineering, editing, and mixing themselves. Jonathan Spring does an admirable job as the ultimate force behind the production. As a result, it can't compare to that of a pro studio, but it's not intended to. The real value is in the process. Bravo!

The mixes tend to be thin with a hollow center, often the result of panning that is too far spread. Depth is lacking overall; there's no distance. The subtle effects don't add much, but I think that's more a function of arrangement than production. What's lacking more than anything is presence and authority. And that doesn't speak just to production values.

Tuning is just ok. Nothing screamed out at me, bad or good. I suffered no cringing episodes, but neither did I revel in locked, jelled, ringing chords. The arrangements tend to be imitative and not especially compelling. Where's that cool riff? What happened to the funky groove? Surely, there's a catchy hook in there somewhere, right? I found myself skipping ahead through songs, looking for something to grab my attention. What did grab my attention? R&B. It's short for rhythm and blues. Unfortunately, there's not much of either in the songs that require it (A Woman's Worth, Sexual Healing, Gone, and I'll Be There), with exception of the sultry solo work of Jenny Maguire (A Woman's Worth, I'll Be There). Ms. Maguire makes me weak in the knees. Another soloist of note is Ms. Jean Perlman, who does her best to save a static and stilted What a Wonderful World. I wish Brendan Jobs was featured more in the mix of I'll Be There. Finally, I dig soloist Cengiz Atasoy (Elevation) because of his unique tone and timbre. Definitely distinctive.

Unfortunately, individual efforts couldn't save bland arrangements and uninspiring ensemble performances. I'd advise you to keep all 47 doors shut on this one. Maybe the 48th door on the next album will take the Clefhangers to the next level.