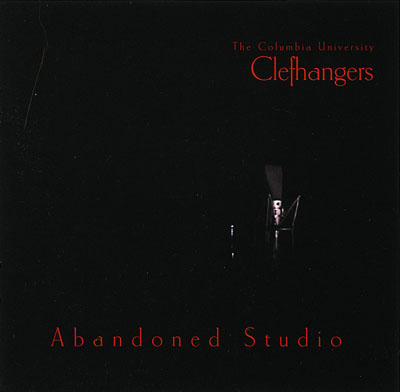 With the album Abandoned Studio, Columbia University's Clefhangers have taken the average college sound and made it good. While this comment might sound like criticism, it is something that is extremely difficult to do.

The first thing that jumped out at me when I listened to this recording was the amount of energy in every song. The a cappella albums we get at RARB so often have a couple of tracks where there is great energy, but it is lacking on the rest. That is not true in this case. The Clefhangers maintain the same level of intensity throughout the album. No one ever sounds bored or disinterested. Everyone wants to be singing at all times. What a relief to hear.

The most impressive thing, though, was what was NOT here. When you've heard as much college a cappella as I have, you tend to anticipate the parts of the song that you know will just be bad. On this album, those parts (and all the others, for that matter) weren't bad. There are so many recordings with tuning and blend problems, but this isn't one of them. Each note is sung perfectly; never too loud/soft/flat/sharp (except for the baritone in the beginning of Janie's Got a Gun, but that's it). I was even quite impressed with the choice of syllables that were utilized. It is so refreshing to know that there are people out there that are creative enough to find new ways of expressing background parts. These are definitely not "do-ba" arrangements.

The major issues that I had were with some of the decisions made, not necessarily with the performance of the songs. I didn't understand the little church music segment in front of Janie's Got a Gun, but I did enjoy the Sonny and Cher section in the same song. I also thought that Smooth sounded over-produced, especially for a college album. Some effects were used on the lead that ended up more distracting than anything else. I appreciated the more honest sound of songs like Faith more than the selections with lots of studio work.

Overall, this is a good album. These singers are talented enough to elevate the score in cases where a lesser group with the same arrangement would be average at best. Many of the usual collegiate a cappella problems were avoided, making it an easy listen. Nice job.

The Clefhangers are a solid college group, and Abandoned Studio is a fine album. Unfortunately, due to some perplexing choices on the part of the group, that's the best I can say about it. Every strength is compromised by a corresponding weakness.

Production is a case in point. In some ways, it's a step ahead of the college pack. The sound has a brightness, clarity, and presence that I enjoyed. On the other hand, some of the album's best leads (like Emily Huters on Crazy on You) are inexplicably buried in the mix.

Same story with the soloists. In so many co-ed college groups, the girls have soul, range, and power...and the guys make you suspect that the all-male groups on campus are draining the audition pool dry. Some of the male Clefhangers are playing in the same league as the women, but others are struggling with throatiness, nasality, or what I can only call whiteness. My favorite moments on the album are when the girls chorus in as background singers, as they do on Fifty Ways and Respect. When the chicks take center stage, Abandoned Studio takes off.

The arrangements are even more all over the map. The Clefhangers know how to make an arrangement fun and effective, but bungle good songs for reasons I can't fathom. The Clefhangers' version of Janie's Got a Gun won Best Arrangement at an ICCA quarterfinal last year. Maybe this is a reminder that reasonable people can differ about the quality of art, or maybe it's a reminder that what works on stage can fall flat once recorded. All I know is, I'd rather use the CD for skeet shooting than listen to this prize-winning arrangement one more time. I agree that when they're actually singing Janie's Got a Gun, they sound great. But this song features perhaps the most abrupt and inappropriate use of quotes I've ever heard. Just as they are going somewhere great with a classic and moving song, they utterly destroy the mood with random and unfunny jokes. Again, maybe it works live, but if I were arranging a humor song to stuff with Bob Dylan impersonations and pun-filled references to Cyndi Lauper, I wouldn't pick a song about child molestation.

Don't abandon the studio, Clefhangers. I loved the bouncy energy of Video Killed the Radio Star and the subtlety of Take to the Sky. Lose the distracting quotes, send the girls to the mic, and I'll be able to give the next album a better recommendation.

It's really tough to pin down this CD. The Clefhangers definitely have the potential for some really nice tracks, but it doesn't happen all the time.

They seem to succeed when they loosen up and get involved in the song. If they get into it, I notice and get more into it myself. Much of the time, however, their renditions are too polite and precise. One thing that seems to help them get into a song is being slinky — this they can pull off. Beatles purist though I am, I enjoy their rendition of spiralmouth's arrangement of Come Together because the whole group gets into the feeling of the song. It could potentially be very annoying to hear a whole background sliding around singing "Come together, yeah!". But, for them, it works, because they all mean "Come together, yeah!". Wrapped Around Your Finger, Self Control, and parts of Janie's Got a Gun also capitalize well on the slinky factor, and make these the standout tracks on the CD. Fifty Ways, Faith, and Take to the Sky could really stand to take a lesson from these other songs.

The "getting into it" and "slinky factor" business comes across as a lack of energy, and prevents arrangements from really opening up. When the percussion kicks in during Possession, I expect a kick, a palatable increase in energy. But the group sounds bored. Or too concentrated on staying in tune and in tempo (which they do quite well). Whichever, the energy suffers and loses this listener's attention.

There are unfortunately no standout soloists — most are quite good (basically all of their women soloists are really good), but none are really just amazing. And the vocal percussion is something I can't quite figure out. Sometimes it's just awesome and effective, and other times it sounds crude and over-vocalized and detracts from the song instead of adding.

Back to some positives. The Clefhangers are precise. They're careful. This leads to being in tune and having a nice sound. Although their arrangements tend to rely a little too heavily on the syllable "Ba" (not the slinkiest syllable, huh?), the women's parts frequently get a really cool Supremes-style backup-singer feel. And it works really well for them. Their women make great Supremes. They also sample other songs quite nicely in their arrangements. When they don't go overboard (Janie's Got a Gun) and abruptly switch out of a song and back entirely, it adds a nice touch to a track. Beep beep, beep beep, yeah.

The Clefhangers have got a great base on which they can build. I'd love to see these guys in concert (assuming they get excited for their concerts), and I'll be looking forward to hearing their next CD. Make sure you have fun with it, you hear?

For a limited time, CDs may be purchased for $14.50 each or $25 for two. Send checks or inquiries to