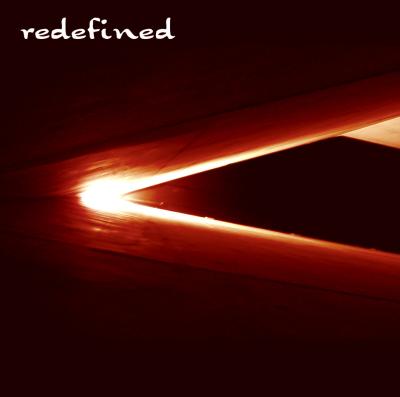 Like a prospector, I sift through Redefined's latest for little shiny specks of brilliance. Redefined eventually gives up a few nuggets, but the end result is still a tough listen. It's not that this group doesn't have talent, it's just that they appear to have a Sibyl-esque personality disorder. Tracks like Helplessly Hoping and There's a Man Goin' Round say they're a glee club. Any Man of Mine says country-pop, while Fa Fa and Marrow say pop. Worse yet, some leads say pop rock or R&B while their accompaniments say bad jazz.

Maybe there's an excess of democracy here. Redefined needs to strike the right balance between their more classical and pop-influenced elements and between their cheesy and cool elements. Right now these forces aren't working together to serve the songs.

Examples: Respect has a terrific lead, but the backgrounds aren't feeling the same groove by any stretch. One, normally the loneliest number, is here the cheesiest number with an untenable "How to Arrange for A Cappella" middle. Any Man of Mine and Fa Fa both have excellent leads, average or better back-ups, and horrendous, song-ruining scat solos.

Perhaps the problem comes clear in Out of My Head. A pretty but overly lyric solo is paired with an egoistic and ill-fitting scat solo. The live track ends in applause. The lesson is that though your fans may clap, you need to hold yourself to higher standards. For a recording, artists and producers have to realize that the energy and camaraderie of the live show can't replace stylistic and musical integrity.

Redefined has all the right elements to make great music consistently: some strong leads, good blend, better than average dynamics and creativity. After some work on pitch and rhythm, it's time for a strong director to do some serious stylistic weeding so this group's talents can shine unfettered.

The first commercial release from the University of Wisconsin-Madison's Redefined can best be described as occupying a middle ground where hard work and success meet problems and failure. This album doesn't stand up well to others in the world of collegiate a cappella, but it does show promise and talent which bodes well for the group's future recordings.

When you read the liner notes to this album, it is very easy to become a bit confused. The liner notes say that the group was formed in October of 2001 with the focus of becoming "a group of mixed voices that would sing arrangements of songs that were a bit edgier than the typical a cappella fare". You don't even have to listen to this album to see that this album is nothing BUT "typical a cappella fare." The track list alone reveals that there isn't a hint of "edgy" to be found. This group failed its own mission statement right from the beginning.

The album opens with another group trying the ol' THX trick. The difference here is that Redefined goes for a less-effected sound. This causes the track that ought to showcase the power and spectrum of sound to sound wimpy and narrow.

The rest of the album is awash with a spattering of live tracks and a hodgepodge of studio-recorded tracks. All of the tracks showcase some very talented singing, but fall short in comparison to other collegiate tracks because of the relative scarcity of studio effects. Studio albums are meant to create, not capture. I truly hope they didn't have high aspirations for this project beyond a memento for them to remember their time in the group.

I was impressed with some of the individual efforts on the album. Adam Bradshaw and Brenda Rae Klinkert provide some very nice solo work on their respective songs. Adam also brings an interesting twist to I Wish You Were Here with some very entertaining turntable scratching. I feel the group's best collective moment was on There's a Man Goin' Round, a Moses Hogan arrangement.

I really appreciated the inclusion of two movie clips from a Redefined concert. It's always nice to get a little something that you don't expect, and these two clips were just the right surprise. I'd like to see more groups include something like this as part of their future recordings.

There's no question that this group can sing. Now it's time to create the edge that you set out looking for. Right now, you're not doing anything that hasn't been done before (and better) by other groups. Redefined is still very young in the a cappella world; hopefully this will be a building block to a successful future

Redefined is a mixed ensemble from the University of Wisconsin that released its eponymous debut in 2003, less than two years after their formation in 2001. As you might expect, the disc reflects the mistakes and naivete of a flegling ensemble. I'll enumerate a few of these in a bit, though I'll kindly spare you the full barrage. However, there is hope; the disc is not trash-can-worthy in its entirety. No, you are not mistaken. There are a few elusive score-of-5-worthy tracks plunked in the middle of the album. The two songs are "diamonds" in a pretty rough "rough". Ultimately, these songs give a glimpse of Redefined's potential for future album greatness, but alone are not reason enough to buy this current one.

If all the tracks on this album were as appealing as Marrow (Ani DiFranco) and Any Man of Mine (Shania Twain), you'd have an excellent disc. That's not to say these tracks are perfect (they're not), but they are evidence of Redefined's capabilities. When they're at their best, these Wisconsin folk have the talent, discipline and energy necessary for creating compelling, powerful music. The former of the two exceptional tunes is a lush, passionate ballad, loaded with sweeping chords and dynamics that grow and build over the course of the entire tune, complemented by a sultry, gut-wrenching solo from Brenda Rae Klinkert. The recording is rich and vibrant. The latter of the two is stylistically different, and, by far, my favorite on the album (OK, so I love trashy pop-country. Sue me.). Despite a disastrous, annoying "violin" solo in the middle, the track wins you over with a cheeky, coy soloist (Megan Gibbons) whose attitude and mastery of country stylings, accompanied by some thick, meaty, "Yeah" call-and-response backing chords, make the track irresistible. This one popped out of my headphones, reached down, grabbed me by my collar, and shook me. And I liked it.

Unfortunately, I wasn't shaken, or even stirred, by the majority of the disc. Overall, Redefined's female backing voices suffer from some intensely square and overly-vibrato-laden awfulness (Renegade; I Want You Back), while the men, though acceptable overall on the backing parts, are much less so as soloists (I Wish You Were Here; Out of My Head; Drift Away; Out of My Head). The percussion levels are a little too low, throughout — a good thing, ironically, since the beats never quite fall into a tight groove (the exception being, perhaps, I Wish You Were Here).

As you might expect with a first release, there's a strong sense that this album is designed for the a cappella un-savvy, which in a way reflects the group members themselves. The disc sounds very...new. Innocent, really. The most egregious example was Three Dog Night's classic One, rendered unlistenable due to a "breakdown" section in which the listener is treated to an unfunny explanation of how to arrange a song, which would make even the most easily-amused listener wince. Nintendo is, well, let's just say I hope it's the last time I have to ever sit through a Nintendo (or any OTHER video game) medley — and this was by far the worst. It took every ounce of integrity in my body to force myself to watch it all the way through on the "enhanced CD" video (which, by the way, is a good idea and I wish more groups would do it, though I didn't enjoy this half of its contents). Like dozens of deluded mixed groups, Redefined seems to fancy themselves "wacky". They should really try, instead, to live up to their name and re-write the notion of what a collegiate group can be. Though it's too early in their history to say for sure, they already show signs of slipping into a generic rut.

If you can get your hands on the two aforementioned stellar tracks, you'll be delighted your with your acquisition. But let this album sit on the shelf and cross your fingers for a superior second effort.