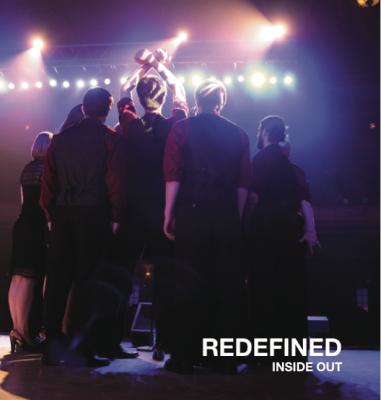 This is my first experience of any kind with Redefined from the University of Wisconsin-Madison, and quite frankly, Inside Out is very much a mixed bag — a CD with spots to praise, but a CD that I'm also unlikely to re-visit again.

The group has talent in abundance through its soloists. Nearly all of them are a perfect fit for the material they are assigned here and in particular, it's the lady altos who shine. Kari Strohmaier does quite well with Regina Spektor's The Call, and the real standout is Mikayla Braun on Adele's Right as Rain. It's extremely imitative to be sure, but given the amount of Adele we've all heard covered in recent years — so often poorly — it says something about Ms. Braun's work that I was thoroughly impressed.

Where the group stumbles repeatedly is in its endlessly repetitive and uninteresting arrangements. In general, this is pretty simplistic stuff. There are moments here and there which feature slightly more engaging rhythmic interplay among voice parts (Breakeven comes to mind), but there's too much homophony in the background vocals to keep things interesting and way too much reliance on sampled vp (more on that below) to establish energy. Almost without fail, you can expect an opening musical figure set to syllables slightly too complicated for their own good, which will repeat over and over through the intro and first verse of most songs. Making matters even less interesting, the background for the first verse will be repeated exactly (or almost exactly) for all subsequent verses and the treatment of the chorus will be the same for all choruses. The bridges, such as they are, generally are of the big block chord variety, creating little shift in mood and no emotional transition of any meaningful kind into the final choruses.

Not helping the above issues is a palpable lack of energy in the background singing. It's all the more troubling because when given the chance to solo, we get proof that there's passion and intensity in the members of the group. But even (or especially) when the arrangers give the backs percussive, hard consonants to sing, they're rendered lifelessly, almost like a chorale on their first read-thru of a piece on a foreign language. They're singing the words on the page but they either have no idea how or have not committed to singing them as they were meant to be sung. 3am is the worst offender in this regard, but there are countless examples.

Lastly, it's certainly refreshing to find an album recorded, edited, and mixed on campus by a current (or former?) student, and generally speaking, the overarching sound "quality" of the CD is quite good (well-recorded and edited). But the group is done a disservice by a fair number of mixing choices. Most egregiously — with the exception of Say My Name which feels like it was mixed and/or mastered separately from the rest of the CD — the basic setup is: soloist far forward with vp right up against the solo, and everyone else seemingly in a straight line about ten steps behind the solo. Perhaps it's an effort to mimic the placement in a live show but the result is taking background vocals lacking in energy and making them feel even more flat and distant. And the vp being so present in the mix draws attention to the sampling and looping which often borders on the Casio-esque. Also not helping is the avoidance of an octave pedal or any other device for filling out the low end. It's not needed on every song, but if you want to bring the complex vocal percussion figures, you owe it to yourself to bring a stronger kick drum, too.

I'm disappointed to not have more nice things to say about Redefined because my gut says that these kids have the raw material to be a solid group. Indeed, so many collegiate groups are catapulted into a higher gear when one particular student demonstrates a real knack for arranging and/or production and elevates everyone's game. Redefined doesn't seem to have found that person yet — they might want to consider some arrangements-for-hire from some of the well-known companies/services — but if/when they do, they could turn into a force to be reckoned with and I look forward to hearing those results.

With their new release Inside Out, UW-Madison's Redefined offers a fairly typical "jukebox album" featuring songs from varying genres and decades. While the quality of the production and soloists is pretty good, the overall result fails to distinguish from so many similar collegiate albums.

Starting with the good, production by group member Dieter Schaaf is generally crisp, clean, and natural sounding. This approach works well with Redefined, whose members are clearly talented and capable (and numerous — eighteen!) singers. The occasional electronic (Fast Car) or other vocal flourish (the breathy "aaah" on Many the Miles, for example), and the varying effects on the percussion do a nice job of complementing, not overpowering, the vocal chops of the singers here.

Although a few soloists lack the spark or verve required to engage the listener, there are some great performances from Mikayla Braun (Right as Rain), Sarah Carpenter (Many the Miles), Kari Strohmaier (The Call), and the duet from Alec Hoge and Katie Berndt in Poison and Wine is achingly fragile.

While simple arrangements can be effective and appropriate (as Jonathan Minkoff noted in his review of Redefined's last album), the only way to really sell them is if personality or charisma oozes from the speakers, something Redefined simply doesn't do here. Absent such demonstrative singing, the "simple" becomes the repetitive and mundane. There are moments scattered throughout the album where arrangements reach and explore change, such as the gradual building towards the final choral verse in Fast Car, and a similar approach in Many the Miles. Unfortunately, moments like this are few and far between.

For the most part, Inside Out is a collection of very solid and safe covers of songs which have been covered heavily in the a cappella community. The group does its thing well enough, and the album strikes me as a very reasonable choice for a soundtrack to a gathering or party where people might pause and say "Hey, I love this song" before resuming their conversation. Next time, perhaps, Redefined can find a way to get the party to quiet down and listen intently to their engaging, creative offering.

When I first flipped over Inside Out, Redefined's 2012 album, I was a bit skeptical of the presented roster of songs. I saw what appeared to be a collection of alternative and soft rock offerings with a few pop and R&B songs tacked on for good measure. This isn't to say that there's anything wrong with a soft rock album, but when Hey Ya and Say My Name are tossed into that company, it made me wonder how smoothly the album would play from start to finish. Surprisingly enough, Redefined's contrasting song choice injects variety to an otherwise bland album. Song selection aside, Inside Out features several great pieces.

Some of the highlight tracks from Inside Out are Tracy Chapman's Fast Car, Hey Ya, and Breakeven. I am thoroughly impressed with the arrangement for Hey Ya. When the track came on, all of my concerns about song choice fled. Redefined did an excellent job of reimagining the song to fit their own style. This version of the Outkast hit is slowed down, mellowed out, and more reflective, but still maintains much of the danceability and fun that the song is known for.

The backing vocals are tight. They're executed well and bring intensity to the songs where the soloists fall a bit flat, especially during The Other Side. The two female soloists, covering Bruno Mars and Cee Lo, have beautiful clean voices, but don't take enough liberty to embellish the parts of the song that are truly emotive.

While all the songs on Inside Out are sonically tight, they tend to carry the same kind of down slow, down-tempo mood. I don't really feel like there is a sense of journey or exploration by the end of the album. A few drop-offs in solos prevented me from giving the album a clean rating of "4". Yet there are still plenty of good moments to be heard on Inside Out and satisfying offerings for lovers of pop, rock, and alternative music.

To contact the group regarding Inside Out and other albums, please e-mail Redefined.