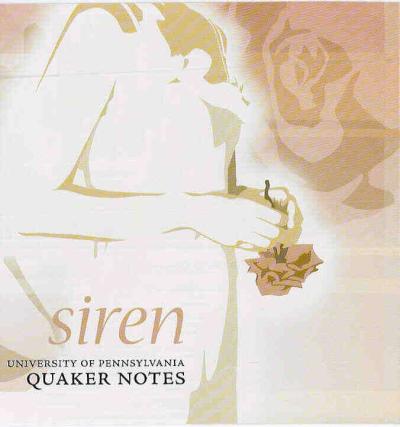 Good voices, good songs, and a decent groove add up to a pretty nice album. The Quaker Notes show that UPenn is more than just a couple of coed groups, and that folk rock can translate into a lot of fine a cappella.

Women's voices at their best have a certain youthful sparkle and knowing allure. Most of the soloists on this disc have both, along with their own personal style. No mindless mimics here. Instead we get a charming chick perspective on Anna Begins and a mumbling, sultry Best of What's Around. The lead on In the House of Stone and Light sounds like, heaven help us, an updated take on Pat Benatar. Mad About You is transformed into something inspired by the likes of Joan Osbourne, She Talks to Angels has a lovely grittiness, and Changes gains almost as much as it loses without Patty Griffin in the lead.

The solos make this disc, and the backgrounds are most noteworthy for staying out of the way. The tuning is usually fine but not terrific, ditto for the blend and the production. The intros are often the weakest point of the songs. Once they get going, however, rhythm is a strong point, as most of the songs find a cohesive pace and stick with it. This consistent jell sounds like the leads and the backgrounds played off each other's strengths and the producers let them, instead of separating everyone in a million unconnected booths.

A word now about Elevation, one of my favorite a cappella tracks this year. The cut explodes with energy and builds into a rocker, helped by a little distortion sprinkled around the edges. Texturally, the song has enough space in it to let the listener appreciate the wall of sound when it kicks in. It's really a great little track. Criminal is also a nice cut, a simple arrangement nailed by the group and the soloist.

Too often, a "hip" sound is equated with a loud, ugly sound. "Adult contemporary" is an insult, and "soft rock" might as well be spelled "milquetoast". The Quaker Notes choose material that favors Taylor guitars over Fenders, but they don't sound staid, prissy, or over the hill like me. I like this group and I like these songs, and I'm pleased to hear an album that leaves them both so well treated.

I am mad about the UPenn Quaker Notes and their album Siren.

Mad About You is a tough song to do well (yes, I know from experience), but especially to open up an album. Here it does a disservice to The Quaker Notes because, despite the oustanding soloist, you get the impression that the girls are just another mediocre group, because the tuning in the upper voices is less than stellar. Siren moves on to an even poorer rendition of Best of What's Around, which has the worst tuning and blend on the album.

But this is not a mediocre album at all.

The best thing going for The Quaker Notes is their depth of soloist talent. These women are amazing. Most of them have a nice warm and mature sound, sounding like seasoned veterans in the recording studio. All hail Amy Okereke and Meagan Crowley, especially. Okereke is the standout on this disc and in the group in terms of ability. She completely saves Mad from being average and does an impressive turn on india.aire's Promise. Where Okereke is soul and sophistication, Crowley brings power and pizzazz. Elevation is rocking gold, and her turn on Stone and Light is so good, it rivals that of early Brown Derbies.

The creativity score comes from taking traditionally male solos and placing them effectively in female settings, while also staying true to their female icons. Not many groups can perform Sting, U2, and The Black Crowes on one hand and still convincingly hit you with stellar Gladys Knight, Fiona Apple and Tori Amos. Something similar to Amos' simply haunting Strange Little Girls is achieved here with Siren. Just like that album, sometimes it works and sometimes it doesn't. More often than not, they score winners.

Things to work on would be a balance and blend. Sometimes the first sopranos are exposed in parts where they shouldn't be. If your part is all held notes while other sections have moving parts, we really don't need to hear it. I fault the arrangements for that, as they tend toward the bland and antiseptic. The block seems to have been recorded on one track so that those moments couldn't be tweaked in the studio; you don't get the punching bass coming through.

They could also use a little work on blending across the voices. Except for the second altos, the sound tends to be airy and somewhat girlish. It makes me wonder where this weakness comes from, because as I mentioned, the solo voices are very strong. A lot of groups tend to err on the side of a more breathy sound, which is believed to facilitate the ease of blending, but you can't blend AIR!

The Quaker Notes make a gallant stab at becoming a part of the royal court of female collegiate a cappellaists: The Loreleis, Jackson Jills, Ladies First, Chattertocks, Terpsichore, Duke Out of the Blue, Essence, Sil'hooettes, Belles, and of course the Sirens. Hopefully next time they will include contact information in their liner notes so we'll know where to send the tiaras.

The Quaker Notes, a female a cappella group from the University of Pennsylvania, should have a great CD in their mammoth third release, Siren. Phenomenal soloists, great arrangements, decent production. But unfortunately, it's not a great CD.

There are a lot of subjective things about music: whether something sounds "good", whether you like it, whether you think it's appropriate-sounding, etc. But all these things are built on one block, without which one cannot make great music at all. As you have probably guessed, this thing is tuning. And it is where The Quaker Notes have failed.

The soloists are incredible. Each song's soloists are the perfect fit for the song's mood, message, and feel; indeed, the soloists are often more fitting than the original artists. Best of What's Around sees marked improvement with the pure and bassy voice of Rosenfelt. The solo I enjoyed the most, however, was Crowley on Elevation. She exudes sexiness, bringing a song to a new level that U2 could never reach. The voices run the gamut (I can't think of less similar voices than Tarantino and Huang, who sit next to each other on the CD), yet they have found the perfect song for every voice.

Arrangements are great too. They boast many arrangers, and they have fantastic versatility. Fast tracks keep their intensity and sense of urgency, while slow tracks are not allowed to fall boringly by. Block chords are shunned, and the arrangements show a clear understanding of how to exploit selective silence, a skill few collegiate arrangers have even discovered, let alone mastered.

Production is pretty good throughout. Soloists are generally at a good level. The percussion is some of the best I've heard from an all-female group, with a clear understanding of how it can be used to drive the songs. Tasteful effects have been administered throughout, but the disc retains a basic organic sound.

But all these positives are overshadowed by poor tuning. The problem is that the tuning is never atrocious. It's slightly off the entire time. It's like instead of being stung by one big bee, you have a swarm of gnats around your head all day. Very few chords lock, due to any number of reasons: different vocal placement, non-matching vowels, and varying degrees of breath support. The major problem, however, is that while all the notes have the same accidentals, they are rarely in the same key. The a-flat of one part is a sixteenth higher than the a-flat the next part sings. These sixteenths and eights in every part add up, preventing a cohesive tonic.

I was particularly disappointed with the poor tuning on this album because the women are so obviously talented. But for me, tuning is where it all starts, the basic necessity for a good album. Without it, The Quaker Notes have failed.

If you'd like to order a copy of Siren, please email qnotes@dolphin.upenn.edu.