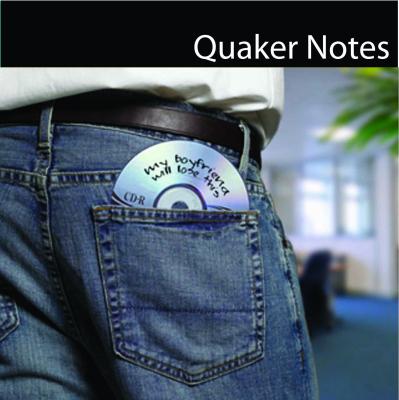 My Boyfriend Will Lose This is a good title. It's a little sexy, a little arrogant, a little bit of a challenge. In short, it's got guts. So do the best songs on this disc.

Alexa Nickeson kicks things up a notch on My Heart, six tracks in and the first number that made me sit up and listen. Her solo gets the song in gear and leads the group into a nicely cohesive performance. Two tracks later, Your Guardian Angel competes for and perhaps wins the honor of best track on the disc, with its twin leads and good feel. Man In the Hall also deserves mention in the best-of list. Soloist Katie Heaberlin sings the hook and keeps the song swinging, transcending tuning problems in the backgrounds.

Those kinds of tuning problems sink the oomph-free numbers. Beautiful Disaster takes its title to heart, alas, and Closer To Fine can't reconcile its heavy block chords with its two sweet-and-light leads. On The Way, the busy arrangement has a lot going for it, particularly when it fuses into a cohesive background and helps the percussion carry the groove. Where the song loses traction is through its timbre — the "no-no" accents and the nasal soloist made the track more grating, less fun. Also, it's too nice. I think a soloist with more attitude and a touch of confrontational sex appeal could have saved it. Where are they going? Why don't they know the way? I wish the Quaker Notes could tell me.

Most of the rest of the disc floats by without making much of an impression. Dig and Better Man both show flashes of groove, and Renegade is at least a good gutsy song. The Quaker Notes version has a great raw swing to it, even though it never really mixes itself into a fully fledged performance.

Overall, this disc shows promise but plays things a little too safe. The Quaker Notes have a lot going for them, and I look forward to seeing where they take it next.

The best thing I can say about the Quaker Notes' latest release, My Boyfriend Will Lose This, is that I did not realize this was a women's group until three songs in. I was wondering when they were going to let a guy solo, when I pulled out the liner notes and realized my mistake.

Without the assistance of an octavizer to artificially pump up the bass, the ladies of the Quaker Notes manage to pull off a full sound. The arrangements greatly contribute to this, utilizing the full range of their second altos and mixing held notes with moving parts to create a continuous wall of sound.

These ladies seem to have made the distinct production choice to avoid production. Everything they do on this album they can surely deliver in a live show. They remind me a bit of the Jackson Jills circa 1999. It is just a little unrefined for the current a cappella market.

There are notes just a hair off. The blend isn't as tight as it could be. Cutoffs are imperfect. The soloists, while good, need to learn a little more control. The alto singers are the better ones, which is unsurprising given the fullness in the low end in the backing vocals.

While I appreciate the Quaker Notes' decision to stick with a purist approach to a cappella, they could use a little production polish next time around.

Sometimes a title can say it all, and My Boyfriend Will Lose This seems apropos for the latest release from the Quaker Notes. My Boyfriend Will Lose This epitomizes the take-it-or-leave-it quality that I feel has become the standard for today's collegiate a cappella albums, sounding good but unspectacular. I can't see many boyfriends toting this album around for eternity.

The Quaker Notes do a lot of good things. Singing is generally high quality and mostly in-tune, though occasionally tuning wanders on more complex harmonies such as the bridge in Renegade. These ladies also have a nice sense of blend and ensemble, as epitomized by the block in Who's to Say and the nice trio work on Closer to Fine. I also thought the arranging was solid: nothing amazing but definitely strong enough to get the job done. I especially enjoyed the arrangement on The Way which had a nice sense of momentum and accentuated the more interesting musical flourishes of this late '90s gem. I also liked the set list, covering groovy songs from several genres.

Yet My Boyfriend Will Lose This never makes the leap from good to great. I feel the main problem is its sameness. While these ladies have talent, everything feels a little too controlled and dainty, lacking emotion and energy. Soloists will occasionally step up and show some gusto, but the backing sounds staid. While interesting arrangements keep the album from being entirely lifeless, I would have enjoyed more energetic singing as well. This may also be partly an engineering issue: the vocals feel a bit compressed and echoey.

The Quaker Notes have a lot going for them, including a track record of decent releases. My Boyfriend Will Lose This continues in the same tradition: a fine, but not outstanding, listen. I suspect once the novelty of the first few listens wears off, many buyers may find themselves misplacing this album.