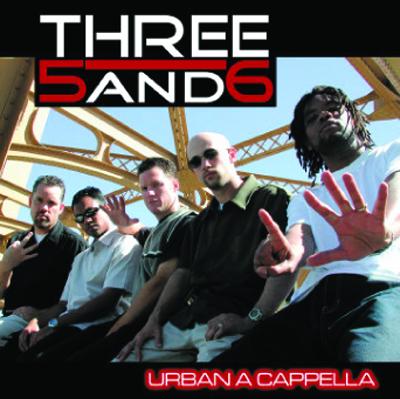 This album succeeds in so many ways. First and foremost is the groove, followed closely by creativity and message. Here's the one sentence description: Three 5 and 6 is like The House Jacks with more hip-hop, more religion, and weaker songwriting.

That's high praise, y'all. In case anyone likes a cappella enough to find RARB but has nevertheless been living in a cave, let's be clear: The House Jacks are the best contemporary vocal band ever. They consistently rock harder and write better songs than anyone comparable. Their musicianship exceeds all but the best vocal jazz groups, and their voices are always among the best available. They put on a great show, they have a great sound and there is very little dead weight in any of it. If anyone thinks 16 college kids with a good producer and a list of catchy radio hits can beat that, they are wrong.

The House Jacks also have charisma, which is a rare thing for a cappella groups. Leaving out our jazz and classical brethren, I've only heard a couple of groups who come close, and they come with asterisks. The Exboyfriends can rock with anybody, but they're pretty much a tribute band. And Double Dong makes an immediate impression, but it sends a lot of people running screaming in the other direction. Three 5 and 6 has charisma too, and if they can kick their songwriting into higher gear, I'd give them good odds of reaching the very top. There are so many good sounds on this album, it's amazing. The collective vocal beatbox has terrific variety and versatility. There's a real mastery of hip-hop and techno choices that more than compensates for the lack of a blockbuster rock-n-roll sound, like Andrew Chaikin's snare. The rhythm is so good, it almost masks my only tiny complaint with this disk: where are the songs?

Don't get me wrong, the songs on this album are fine. They're just not amazing yet, and I think this group can get there. I give them high marks for using mostly original material. The two cover songs fit in well and add nice depth, which is what cover songs are supposed to do. The spoken word "one minute" is terrific and deserves to be marketed nationally as a public service announcement. The rest of the message works well too.

This is a very religious album, at least as Jesus-centered as Halogen's Halogenesis, but the focus on love, choice and potential mean it should have a far wider appeal. The band's name stems from Proverbs, chapter 3, verses 5 and 6: "Trust in the Lord with all your heart and lean not on your own understanding. In all your ways acknowledge Him and He will direct your paths." These guys get it. I never once felt that they leaned on their understanding to judge me. As a result, I was never once inclined to lean on my understanding to judge them right back. Instead I felt uplifted and inspired, which is about the best possible outcome of religious music that there is.

All in all, two thumbs up from me. Can't wait for the next one.

I am the first to admit when I don't understand something. Sometimes different musical tastes don't agree with me, but I can still understand what the group is looking to achieve on their album. With Three 5 and 6 ... I just don't understand.

Urban A Cappella is an album that ebbs and flows through a mixture of organic pop, rhythm and blues, and rap. The five gentlemen who are Three 5 and 6 are all very talented vocally and are very good at interpretation and arrangement. Where this album falls a little short is in its connection to the listener. This is an album that you won't like if you're not already influenced and appreciative of urban music. This isn't the album to expose urban music to many new and virgin markets.

I didn't feel that the album's introduction track was necessary with such an extensive set of liner notes. The next few tracks, Radiant Love, Higher Ground, and Strong Enough are all solid charts with a good balance between commercial appeal and innovative, unique music. What happens after this point, though, is a bit beyond me. It's like the album just loses me. Or us. Or it. Or whatever.

Tracks liks Universal Beat Box, Just a Minute, and Loungin' failed to connect with me. I tried my best to understand the writing and their value to this album, but all that I could come up with was more questions. It's hard to write this because this album is quite good with regard to studio production, concept, and delivery. Not everyone will agree with my personal indifference to this album; please don't read too much into my misunderstanding. If I were these guys or their fans, I would be thrilled with this release.

My major peeve on this album was the vocal percussion. It always felt rushed and disconnected. Complex rhythms were sloppy and the sounds were not very believable. It was a very rare instance when I felt like the vocal percussion was truly the backbone of the rhythm section for the song to build upon. I felt like they were trying to master the best without paying attention to the basics.

This isn't a bad album; it's just not for me. I could easily see an individual who enjoys urban music loving this album. It's not a bad pickup if you're in the mood for something different, just beware that Three 5 and 6 are not your typical mainstream vocal band. Three 5 and 6, if nothing else, are unique.

Three 5 and 6 has a strong debut in their first full-length album, Urban A Cappella. A five member pro group based out of Sacramento, California, they offer Christian-themed hip-hop, rap, and R&B. The album features 15 songs, the vast majority originals, but also includes a cover of a hymn and an inspired cover of Stevie Wonder's Higher Ground.

The field of original hip-hop a cappella, while growing rapidly, is still relatively new and unexplored. This album makes great headway into this a cappella niche, but there is still some work to do on the required elements. I listen to hip-hop for three main reasons: funky beats, a kickin' bass line and other harmonic elements (horns, piano, etc.), and hard-hitting original lyrics. Three 5 and 6 have mastered the first of these elements, offering truly fantastic vocal percussion. These guys gave their percussion tracks lots of love in the studio, with multiple layers and lots of post production; I particularly enjoy the breath tracks layered under many of the songs. The final outcome is beats that would be innovative even by commercial, computer-generated hip-hop standards. Look at Universal Beat Box, for instance, which is almost a tutorial on how to lay the VP down. It sounds great.

I am not in a position to judge the lyrical elements; it could just be me, but even after three weeks of constantly listening to this album, I still can't get 100% adjusted to rap about Jesus. I will leave these judgments for connoisseurs of Christian music.

The bass lines are the element of the album needing the most improvement. It is clear that, while he has an incredible range and a decent musical sense, Halverson has the weakest voice of the quintet: take a listen to Arms Open Wide, for instance. The bass lines just don't have the thump and energy that hip-hop music requires. The songs Gotta Get Him and Loungin' almost get there, with bass taking sonic omnipotence; it takes center stage as the driving force for the songs. If the rest of the album had bass lines as salient as these, I think it would be a great improvement. In general, the up-tempo songs are the most entertaining.

Overall, however, this album is exceptional. As expected from a professional group, tuning and blend are flawless, with parts moving in unison and always perfectly matched. Pearce's solos range from inspired to mediocre, but generally he does a decent job on all songs; Isaac's raps are great, with enough nasal clarity in the voice to pierce through the background. Production is fantastic, with the above-mentioned exception of the bass line which could be more prominent throughout.

These guys have a lot of talent and ideas, and it shows in their product. This album goes a long way in bridging a cappella and hip-hop, and I hope to see Three 5 and 6 build on this in the future.

The CD may be purchased securely via Three 5 and 6's website.