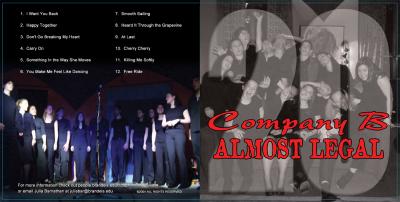 Brandeis' Company B presents songs from the '70s and earlier on an earnest and polite disc that never offends and never rocks. Given the personality of the group, I'm glad they're singing this repertoire rather than, say, Pearl Jam covers. I'd love to see more groups playing to their strengths like this.

In another wise use of resources, male voices lead only three of the twelve tracks. Like most co-ed women, Company B's treble voices sing circles around the guys. Buzzing nasal tone or Broadway-style delivery compromise a couple of the male solos that are featured.

That being said, even a Jackson 5 song can benefit from a bit of an edge, and that's lacking here. You Make Me Feel Like Dancing suggests the group feels like dancing a chaste fox trot or maybe a boot scootin' boogie. Ever seen one of those old Ed Sullivan clips of Pat Boone singing Elvis or Jerry Lee Lewis songs? And you got the distinct feeling that something rather important was missing? That's how most of the album feels.

I certainly don't expect professional jazz vocalists, much less collegiates, to top Ella Fitzgerald or Etta James, but I'd like to hear some sexiness mixed in with the innocence, and that's hard to hear here. Especially since soloists like Olinde Mandell are turned down and literally hard to hear against the block.

Company B does bring some energy on a few numbers. Senior musical director Mark Lipman actually pulls off the falsetto on Heard It Through the Grapevine. This guy needs to join a Bee Gees tribute band. The backup girls on this track offer a welcome moment of actual soul.

I love to hear collegiate jazz; it's just a lot tougher to get away with pitchiness and rhythmic disunity on a jazz number. Company B doesn't have the technical precision its repertoire demands. Carry On, with its pretty suspensions and lovely blend between tenor and treble, would have earned a 4 if it were just cleaned up a little.

Company B does a better job than most groups of sticking to comfortable ground. The next album would benefit greatly from extra rehearsal time to add tuning polish. Listen to some Nassoons or Krokodiloes albums to hear how old-school repertoire can be brought to life without sacrificing technical accuracy.

Almost Legal is an album of yin and yang; moments of goodness that linger in the mind are eventually, inevitably erased by moments of badness. Just as songs show promise, any one of several seemingly inescapable musical problems is bound to kill the moment.

The group's warm, womanly and mature altos are balanced by sopranos that are chronically off pitch, overloud and strained (Happy Together). Sloppy rhythms dull a few lively, interesting arrangements (I Want You Back, You Make Me Feel Like Dancing). Weak technique hobbles some beautiful soloist voices (Something In the Way She Moves). Warm, balanced chords, a rarity on this album, are marred by awful blend, sometimes by overzealous section leaders (Cherry Cherry, Something…).

As a coed group, Company B's numbers are split fairly evenly by gender. The album, however, feels much more like a women's group as the women dominate the men. Chords tend toward top heaviness, the tenors and baritones sometimes vanish in the mix, and the bass and vp are under-emphasized (Don't Go Breaking My Heart). The alto section sounds strong, putting forth some strong soloists and carrying the middle range of the group. The higher voices, both sopranos and tenors, cause chronic blend problems, sticking out with bad pitch and tone matching. The lower men seem to be just along for the ride on most songs, letting the altos drive the group.

Most egregious of the many problems plaguing the album is the studio work. Fans of Seinfeld listening to Almost Legal might describe Company B as a group of singing closetalkers. The miking work is very close — so close that you too may subconsciously back away from your speakers. Then you might turn the volume down, only to lose all sound. There is no escape. You must listen to this album as if you were pressing your face up against Company B's collective mouth. You'll hear some mouthy, lip smacking noises (gross!) throughout the album. The studio applied some guitar overdrive effects nicely during a few instrumental solos, but otherwise, effects sounded tinny and feeble.

Aggravating the sense of proximity is the lack of any sense of space or depth. There is almost no reverb applied to most tracks, leaving the group's sloppy entrances and cutoffs glaringly apparent. There is very little panning of voice parts or vocal percussion to spread out the sonic canvas. The studio made no attempt to use EQ to differentiate the bass and vocal percussion parts from the rest of the mix. The intro to Cherry Cherry was obviously punched in during a vamp. Something In the Way She Moves sounds crispy and airy, unlike the rest of the tracks. The whole album would benefit from a de-esser.

I wish I could score this album higher. There are some genuinely good things going on, and Company B has a lot to build on. The group's strong altos, gorgeous solo voices, good group energy, thoroughly likable repertoire, and active arrangements could produce a strong album in the future. Company B must first find a new recording studio and then break the cycle of problems with blend, balance, and intonation.

Company B's recent release Almost Legal, an album commemorating the group's 20 years of existence, is an homage to all that was great and damning about the pioneering days of contemporary collegiate a cappella (that would be 1989-92).

First, I'd like to commend them on sticking to their guns and performing only songs from before 1980 — there is a wealth of great songs that they can mine to keep their repertoire amazingly fresh while also touching on "the classics" we've all come to admire and loathe in today's music. It's also interesting to hear an album that hearkens back to the early '90s in terms of recording techniques, you get the impression that they crowded around a couple of microphones and sang until they heard a take they liked (ah the memories).

Unfortunately, unless you are top-notch musicians who can ring chords at the drop of a hat, stay amazingly energized throughout the umpteenth version of I Want You Back, or have completely kick-ass arrangements, then those early ideals don't make for outstanding recordings by the standards we're used to now. Which is why I can't give a very glowing review of Almost Legal. They know that it's a yearbook recording. It's an extremely addictive yearbook recording, one the group can be proud of, but it is just completely not for mass consumption.

Two pieces of advice: please don't start off an album with a track featuring a female soloist (Julia Barnathan) singing a male track and have her sound like she's straining on the top notes through most of the tune. Lower it a couple of steps, bury it in the mix of songs or don't sing it. Considering the song, I'd opt for the last. As a comparison, Mark Lipman doesn't have the strongest falsetto to carry off Heard It Through the Grapevine, but the track ordering gives him a bit of leeway so it's not as detrimental to the overall expectation of the album.

Secondly, the arrangements are really strong and probably work great when performed live. Here, at times, some of the oddest parts are given full attention in the mix that have no business being emphasized. The "dits bri-nahs" throughout Carry On or whatever it was used to create the guitar sounds spring to mind quickly, while the soloist is buried so far back that it's hard to make out what's even being sung. The auxiliary parts are exposed like that on almost every track. Sometimes all of the background overpowers the soloist. It sounds like Olinde Mandell gives a very heartfelt and touching performance of At Last, but I couldn't really tell because it was drowned in a wash of dos, bahs and dums.

Kudos on including some of my favorite songs and artists on the album. Happy Together solidified my love of a cappella performing back in the mid-80s. Roberta Flack's original Killing Me Softly is far superior to the remake and Company B do an excellent job rendering their version with loving tenderness and pathos. And like any true North Carolinian — James Taylor for president!

To order, send a check for $16 (includes $3 for shipping) made payable to "Brandeis Company B" to: