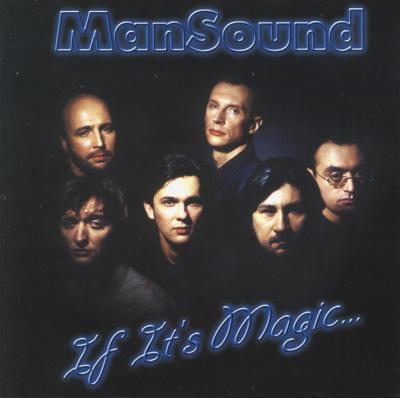 Having read the reviews of ManSound's previous release, Slavic Roots", I was excited to find If It's Magic in my mailbox. No longer presenting Russian and Ukrainian folks songs, the Ukrainian male sextet delivers a compact (38 minutes) selection of jazz standards and jazzed-up versions of Stevie Wonder tunes, arranged with a sure hand and performed with great skill and energy.

The tuning is mostly great, though there are a couple questionable moments in some of the more complicated passages. The singers have a buzzy quality to their voices that they use to their advantage in creating a phenomenal blend. The bass is buoyant and energetic, and the rest of the block transitions seamlessly from smooth string-like parts to brassy horn parts. The solos are all heartfelt and skillful, with some real standout moments (most notably Yuriy Romensky's turn on "Stephanie"), and a soulful guest appearance from female lead Gaitana on the Stevie Wonder medley. Additionally, I find the accent quite endearing.

My biggest complaint about the album is that there are too many medleys (two of them being medleys of George Benson's songs). The medleys are well conceived, but they don't develop the tunes enough when compared to the other tracks. Music director Vladimir Mikhnovetsky is a wonderfully talented and creative arranger, and some of his charts are just spectacular. The middle section of Nature Boy, the middle and outro of Lullaby Of Birdland, and the tempo shifts in They Can't Take That Away From Me, are just fantastic. With the medleys there is less opportunity for him to really flesh out the possibilities of the tunes. I would love to hear full versions of these songs, especially "Stephanie" and "Isn't She Lovely". As it is, there are pieces of ten songs put together in a way that leaves me wanting more from each, transitioning to the next tune when I'm really digging on the current one.

In his review of "Slavic Roots", Jevan Soo commented that ManSound sounds "like they really enjoy what they're doing" and that is true beyond a doubt, and that is a wonderful thing to hear. Great skill and energy combine to make If It's Magic a worthwhile listen for the vocal jazz aficionados out there, and I am excited to hear what they come up with next. Keep an eye on these guys; they've really got something good going.

Just as the crayon cover art for ManSound's first album suggested its sincerity, the liner notes of If It's Magic hint to listeners what lies in store. Blue neon fonts, men in white suits, a fake starry background... the 'aw-shucks' mentality of the first disc has been overwritten by a smooth, slick aura more suited to a casino lounge act. This visual transformation is accompanied by a dramatic repertoire shift from the Ukrainian/Russian folk music of "Slavic Roots" to an odd mix of English tracks ranging from jazz standards to Stevie Wonder.

While some of the music here still impresses, the trajectory of the tracks is confusing at best. The album is really two EPs put together, a pretty bad one followed by a fairly good one, virtually turning on a dime from mediocrity to strength halfway through the tracks. If It's Magic opens with a listless, disjointed medley of George Benson songs and follows up with a stilted, poorly tuned Gershwin cover. The third track impresses more with shifting tempo, chords, and energy, but also fails to actually captivate the listener. Poor tuning and blend, awkward solos, and genres that seem out of the singers' comfort zone — a bad start to the album, to say the least.

But by the time we hit the 2nd George Benson medley, ManSound begins to pick up the pace. The group moves much closer to the warm and vital sound that made their first album so appealing. Yuriy Romensky, who provides most of the lead vocals on the album, settles in and provides far more heartfelt and competent performances than he did on earlier tracks. In particular, the Stevie Wonder closer has some lovely moments (the wistful closing chord, some great solo work) and serves as a solid bookend to an erratic tracklist.

What made ManSound's debut so exciting was their strongly competent take on a relatively new addition to the professional a cappella pantheon — Slavic folk music. Their choice to move solidly into the pop/jazz arena is a risk that alternately fails and pays off here. ManSound fails particularly when they try too hard to replicate these standards (the painful Ella and Louis impersonations on track 2 come to mind). They shine most where their performance echoes Slavic Roots: well-tuned jazz chords, a warm and energetic sound, and inhabiting their repertoire rather than imitating it. While inconsistent, If It's Magic suggests ManSound still hasn't lost their touch; however, we'll look for a more solid and sincere effort next time around.

For fear of getting trampled on the RARB Forum for the comment I'm about to make, I'll precede it by saying that this album is, bar-none, one of the best jazz albums I've ever heard. That being said, the first time I listened to If It's Magic I immediately envisioned American Idol reject William Hung and his version of "She Bangs".

"But what do you mean, Val? You like it, but you're thinking about this Asian engineering student-cum-Latino-popster-wannabe?" Allow me to explain. The Ukranian vocalists of ManSound perform jazz, the ultimate American musical form, so very earnestly, beautifully, and musically accurate — dead-on balls, to be frank — but with an Eastern European affectation incredibly evident in each soloist's performance. Nevertheless, you will quickly get over it, as I did, and appreciate the diverse arrangements and incredibly complex pieces found on this album.

I love the group's blend and creativity more than I can possibly say, and the individual artists for their soulful, appropriate solos. Overall, the group replicates sounds akin to Take 6 and Az Yet (They Can't Take That Away From Me), but also Manhattan Transfer and Vox One (Lullaby Of Birdland). Bass Ruben Tolmachev adds punctuation and energy to every song with an assertive bounce and incredible control. There's not too much to comment on regarding the actual songs. Suffice it to say I don't usually like jazz and don't have a good enough vocabulary to describe it, but that this is an album I love listening to and will keep in heavy rotation.

William Hung was, at the beginning, very endearing; now he's just annoying. That isn't the case with If It's Magic and ManSound. The album is a complete 180 from their first release, Slavic Roots, but holds itself to the same incredible level of professionalism and perfection. This sophomore effort only proves their talent reaches beyond their native language and traditional music to extend into this genre. That their English is noticeably affected is but a minor footnote on the album. As Jevan Soo noted in his review of "Slavic Roots", their "vocal diversity, both in dynamic and stylistic variation" was most impressive. I couldn't agree more in light of this newest release. If It's Magic proves ManSound to be accomplished virtuosos in a wide cross-section of musical forms.