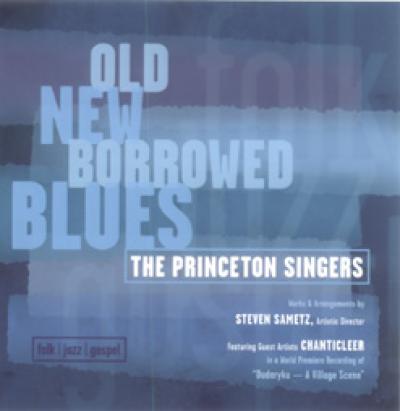 Recording choral music is always a tricky proposition. The precision required in microphone placement will tax even the most talented of engineers. If a mic is an inch or two too far to the left or right or too close to the choir, the recording will sound imbalanced. An inch or two too far, and you risk picking up too much room ambience and overwhelming the actual singing. And since each room is different and each choir is balanced differently, there is no set formula one can follow. Excessive variation in volume is also a difficult problem for the engineer to avoid.

The precision required of the choir is no less. Recording tends to amplify every tiny tuning flaw and every sibilant consonant that falls a millisecond late far beyond their conspicuousness in a live performance. All of the above is, of course, true of any recording, but choral music provides perhaps the least room for error.

That said, Old New Borrowed Blues, though by no means flawless, is an acceptable recording of a high-quality college choir. The Princeton Singers, who focus on folk, jazz, and gospel, number only 18 but manage to sound much larger thanks to a plethora of well-trained voices. Their music, all arranged by Artistic Director Steven Sametz, is often very difficult harmonically, rhythmically, and linguistically (Bosnian! Latvian! Thai!), and they are undaunted. And they have a nice feel for how to shape a phrase.

The group's tuning is somewhat inconsistent, though no error seems grave enough to be noticeable without the aural magnifying glass that is the recording process. Blend and balance are consistently disappointing, but that could also very well be a recording issue. More troubling, the choir's collective tone sounds strained and brittle; the singers would be well advised simply to open up and relax a little. The jazz numbers would have benefited from a less traditionally choral sound.

The main problem with the recording is the need to keep turning the volume up and down. Like so many choral recordings, it ranges from inaudible to deafening. I realize significant use of studio effects would cheapen the art, but I suspect that some very light compression would serve as an effective, unobtrusive remedy. On the other hand, The Princeton Singers did not record this disc in front of an audience, thus rendering it blessedly free of the bronchial symphony that too often accompanies recorded choral music. Natural reverb enhances but does not dominate.

Old New Borrowed Blues is an unqualified success on one front: as a showcase for Sametz's wonderful arrangements. He has a real gift for taking simple melodies and employing the most sophisticated compositional techniques of the 20th and 21st centuries to bring out their beauty. Shenandoah, with harmonies reminiscent of Gorecki, is an especially gorgeous example. His jazz charts are whimsical and daring, especially Harry Connick's We Are In Love. And his original composition Dudaryku — A Village Scene, about the town piper in a village in 19th-century Ukraine, is a stunner, haunting and cinematic. The Princeton Singers are joined by the great Chanticleer on this one, which helps to stabilize their intonation.

Old New Borrowed Blues offers much of interest to the choral music aficionado, but it also demonstrates much room for growth.

Old New Borrowed Blues by The Princeton Singers is killing me. I would love to praise it for the excellent tuning, the impeccable control and the subtlely-nuanced phrasing. The group is made up of masterful choral singers. Truly remarkable, they are (and they would have to be to dutifully hold their own during their collaboration with Chanticleer).

I would be able to do all of this is and more if the recording levels of the album weren't so low on most of the tracks. I literally had to crank the volume on my computer to the utmost level to get some nice mezzo-fortes to even register. And forget about it when I played it on my car stereo... the rumbling of my engine drowned out everyone but the piercing sopranos.

I'm not sure who to fault for this mistake. Naturally, being a classical ensemble, they went for an acoustical setting that would enhance the dexterity of their voices and the choral approach to their music. Unfortunately, I think both Baker Hall at Lehigh University and the auditorium of the Music Building at The College of New Jersey did them a disservice. The ambient sound of the choir carried over in certain phrases which muddied the quicker passages on the folk songs.

Oft times, most notably on Dudaryku — the commissioned work for The Singers and Chanticleer — the beginning of each of the sections is lost to the point that I couldn't tell if the group was supposed to be singing in English as the translation suggests. There just seemed to be a string of "loos" which would occasionally be punctuated by an "ah".

Don't get me wrong, the first five of the 13 tracks are truly a great sleeping album. With a lush bed of music, you can find yourself drifting off to a richer slumber than the strongest Ambien® could recreate.

Things begin to get weird during the last eight tracks. I am all for diversity on a cappella recordings, but the selection here should have really constituted two different albums and concepts. While not as bad as, say, The Real Six Pack, it is such a jarring leap of faith that quite possibly only their most diehard fans could truly enjoy it. Or maybe it works better in the concert format for which I'm sure the selections were chosen.

First, we have a smorgasbord of folk songs from around the world. Okay, I understand that, but when they get to the American section the purpose behind the song choice is completely lost on this reviewer.

The attempt at the jazz swing needed for Do I Love You is cringe-worthy. Sondheim's tender lament Losing My Mind is lovingly rendered, but, except for a tenuous "love" theme of a few of the other folk songs, loses the pathos inherent in the original. Blue Skies is just, well, bad, with a convoluted arrangement which includes "Inspector Gadget", "Puttin' on the Ritz" and several other songs that I don't care to mention. It is the most affected piece on the album, filled with the kind of antics that made you hate your high school show choir.

Shenandoah and Follow Jesus make much more sense and fit in with the rest of the album based on what happened before. And they seem much more comfortable in delivering this material. Though the gospel number isn't any good and suffers from some bad balance issues... at least it makes sense!

I'll recommend buying the album because truly the first five tracks make up one of the best albums I've ever almost heard.

To all the naysayers who say you've got to spend a ton of money on your album to get a great RARB score: Stand back, because I've got an arsenal of comments that'll make you want to eat your words. The Princeton Singers, a professional choir out of New Jersey (and unaffiliated with the university), have laid out a solid, well-rounded album of world folksongs, American standards, and American folk and gospel that really puts most other live recordings to shame. Old New Borrowed Blues proves, once and for all, that you can have your cake and eat it, too, having been recorded in two area music halls and still offering a delicately blended, dynamic journey of music across the globe.

Although the album does have a slight hollow sound resulting from the recording techniques, it is not entirely inappropriate, as The Princeton Singers are a choral group. While the miking is superb with equal balance between the low, full basses and what is usually an overbearing soprano section, the only weakness in this method is the loss of clarity during solos and the particular complexities within certain arrangements. Recording in a studio could have resolved this issue, giving the album less of a live-in-concert feel and more of a sound suitable for mass distribution.

Even so, from the spinning, whirling feel of Paidu Li Vwihdul Ja to the yodeling of La Villanella, the Singers aptly tackle difficult pronunciations of foreign words, giving them an energy that perks up the ears of even this listener with pop-inclined tastes. Execution on all tracks is excellent, but the weakest arrangements come in the American standards section, which rather fail where groups like the King's Singers and Swingle Singers have succeeded. It is to be expected that a professional choir will carry off jazz differently than the offshoot of a collegiate glee club, but I've come to appreciate the fresh, lively performances of the latter, which only slightly explains my disappointment at this section of the album. I suppose it's a matter of personal discrimination; I think my grandmother would indeed enjoy these well-performed pieces.

Side note: I'm not even sure how to rate a track that bills itself as Irving Berlin's Blue Skies and includes a medley of completed unrelated songs ranging from Puttin' on the Ritz to Hava Nagila to the theme from The Pink Panther, concluding with Richard Strauss' Also Sprach Zarathustra and (no joke) the theme to The Addams Family. An interesting combination, to be certain.

All confusion aside, Old New Borrowed Blues offers the listener a compendium of musical stylings under the expert management of Artistic Director Stephen Sametz. I'm skeptical about the younger listenership's true appreciation of this album given our leaning toward pop, alterna-rock, and anything graced by the gifts of Bill Hare, but fans of world music should happily welcome the Princeton Singers' latest effort into their collection. It doesn't take a deep wallet to make an impression on a RARB reviewer, but rather, deep talent. Such skill and competence is always easy to recognize, despite the recording techniques.