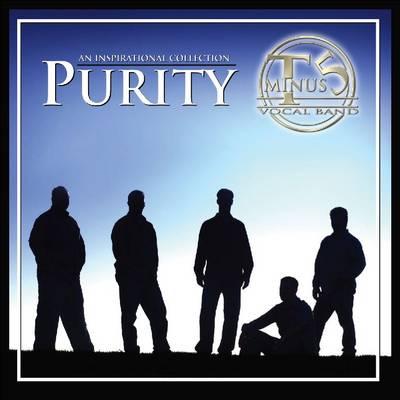 T Minus 5 calls itself a "vocal band" on the cover of Purity, the group's latest release. On no planet, in no drunken haze, and under no amount of torture can I imagine calling this 5 man Christian glee club a vocal band. That bit of false advertising was a bad start for T.

Purity's production is clean but very raw, lacking the bare minimum of studio wizardry which even collegiate groups regularly display. Nonetheless, attentive musicality, decent blend and generally nice voices make the CD more listenable. At least for a while.

Weaknesses in blend manifest in upper voices primarily. Either the too-pointed tone of an occasional, overly enthusiastic falsetto or the burst of volume from a heartfelt, belted high note upset the delicate balance of voices, usually at climactic moments. But between these moments of upset, it's clear these singers paid great attention to blend and open vowels.

A more serious weakness is song programming. What a sleepy bunch of songs these are. So much attention is spent on crafting each phrase, yet the overall balance of tempos and rhythmic palette is deadly monotonous. Adagio feels upbeat. The Star Spangled Banner is one of the most lively, toe-tappin' songs on here. It also has the virtue of brevity, which could have benefited many other tracks.

In balance, I found this release to be average, perhaps on the high side of average due to the group's strong musicality and pleasant tone color. But for individual singers as talented as the members of this ensemble, the songs provide only a single repeated musical challenge. T-minus 5 has the talent to do something really interesting and innovative. Purity isn't it.

Fascinating to me that on the heels of the MIT Logarhythms Soundproof, an album called Purity from T Minus 5 should show up on my doorstep. It's hard to imagine two more disparate albums. Whereas the ‘Logs, using their self-built studio, fashioned an album that used every last gizmo in their technological bag ‘o tricks, T Minus 5 utilized only the "IsoMike", a new, highly-sensitive microphone that aims to record the human voice in as pure a form as possible (hence the album's name) and, just for added measure, recorded in Super Audio. In this case, less is not more, and T Minus 5's results, like the Logarhythms's, leave me similarly underwhelmed.

Fact is, your own grades for Purity will have a lot to do with the terms upon which you consider its quality. If you're looking for some nice settings of religious music, this is by no means the best but it's certainly not bad. If you're looking for an example of cutting edge technology at work, this CD is liable to make you drool — I don't Super Audio-format equipment, but even a standard Dolby 5.1 six-speaker surround system makes it clear that nothing escapes the "IsoMike" and the clarity is pretty astounding. But if you're looking for a good, fun a cappella CD that will get a great deal of repeated plays, even if you ARE a fan of religious music (and I actually am to some extent), this definitely ain't it.

Though they have two previous CDs of predominantly modern, popular music, the guys of T Minus 5 are clearly deeply religious individuals, and they've used this disc to show their affinity for religious music by offering six spiritual/liturgical pieces with Shenandoah and The Star Spangled Banner thrown in for good measure. If the arrangements demonstrated, or even hinted at, the breadth and creativity of similar offerings from The King's Singers and other groups, these choices might be far more compelling. But, despite a generally strong blend, there is a sameness to the tracks that bores the ear quite quickly. Every voice gravitates toward the middle octaves with very few extremes except occasionally at the ends of songs. In their pop music, T Minus 5 may be able to get away with arrangements where the "block" is sitting squarely in their musical comfort zone. But to pull off more choral arrangements such as these, they need to an expansiveness that is sorely lacking.

On a related note, the "IsoMike" coupled with the group's insistence on purity of the highest form (no doubling, no mixing, no effects, no processing) turns out to be a mixed blessing. The clarity is refreshing but it also unsparingly reveals small tuning miscues, breath control issues and the occasional intrusion of ambient noise. There is truly nowhere to run and nowhere to hide: while the guys get an ‘A' for being brave, they aren't yet as polished as they need to be to make this technology truly enhance, rather than distract from, their sound. "Innovation" and "Creativity" count as a single review category, but this album makes it difficult to assign one grade because the innovation of using the IsoMike is impressive but the musical creativity lags way behind. Similarly, the "Sound/Production" grade is a tough one because the recording itself is both technically fascinating and aurally crystal clear, yet on some level, it is to the detriment of the album as a listening experience.

T Minus 5 won the Midwest Regional Harmony Sweeps back in 2001 and this album definitely piqued my curiousity for what these guys might be able to do with some more imaginatively arranged and varied material and just a smidge of studio indulgence. But for now, I feel like Goldilocks — MIT's CD was "tooooo much"; T Minus 5's was "tooooo little" — and I'm still searching for the album that's "just right".

T minus 5's album "Purity — An Inspirational Collection" is one of the most unobjectionable albums that has ever been inserted into my CD player. The listener is treated to 6 tracks of fairly standard arrangements of religious songs with a brief patriotic bookend of Shenandoah and the national anthem tagged on at the end. This music is clean and solid — totally unobjectionable.

Unfortunately, I find unobjectionable often equates to unremarkable, and this album is no exception. The 5 men of T minus 5 are perfectly fine singers with solid vocal instruments and control. Solos are warm and pleasant, the blend is generally good, and the tuning is fairly consistent with occasional blips. But there is virtually nothing here to set T minus 5 apart from any other bunch of guys who can sing together pleasantly in tune. The arrangements are blander than Wonder Bread and plod along hymn after hymn, with nary an interesting chord in sight. Soloists are fairly interchangeable — everyone is capable, but no one is distinctive. It's particularly baffling to me why T minus 5 would stamp themselves a "vocal band" on their album cover, given that their repertoire and style would be most at home in the more conservative church services I've attended over the years.

There is some interesting and relatively innovative Christian a cappella out there, but T minus 5 doesn't fall in that camp. Think of this album as the exceedingly polite, nice guy you were set up with at your church's youth group, and then dumped for being exceedingly boring as well. T minus 5 has the chops to be far more interesting, but for now I'll be attending the post-church ice cream social alone, thank you very much.